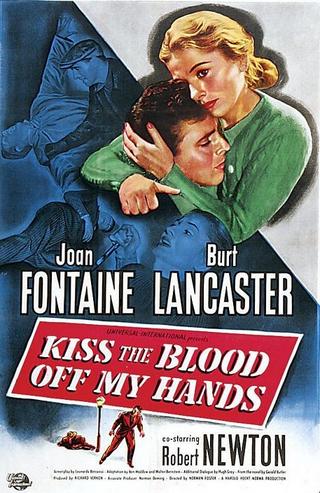 Some titles are just irresistible, catching the eye and positively insisting that you watch them. And if ever a movie title seemed to encapsulate the absolute essence of film noir, then it surely has to be 1948’s Kiss the Blood Off My Hands. In terms of expectations, it sets the bar pretty high and I wonder if anything could actually live up to the promise.

The film gets off to a flying start with a dangerous and moody looking customer reacting violently to a barman’s attentions. It leads to a scuffle, a fatal punch and then a desperate flight through a grimy studio recreation of post-war London. Bill Saunders (Burt Lancaster) is the fugitive, a former serviceman with psychological scars left by his years as a POW and no place to go. Still, he finds himself running and the only refuge he discovers is the home of Jane Wharton (Joan Fontaine), a nurse who’s suffered her own losses in the recent conflict. Out of this reluctant encounter, an inauspicious beginning if ever there were one, grows a fragile romance, the kind one couldn’t envisage outside of times of immense social upheaval. However, the world of noir is rarely concerned with handing anyone an easy time so it’s not long before Bill’s hair-trigger temper and an ill-starred blend of blackmail and black marketeers threaten to sour the relationship. 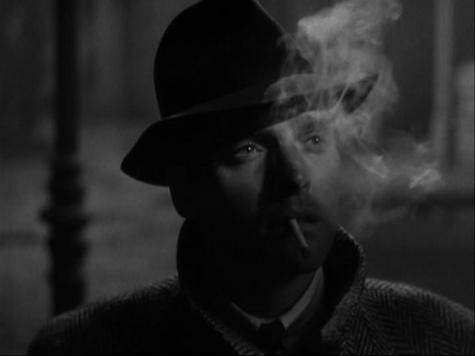 Director Norman Foster’s biggest credit is probably Journey into Fear, but his work on the Mr Moto and Charlie Chan series is well worth checking out. That low budget background arguably serves him well here as there is a briskness to the movie that’s very welcome. Of course there’s plenty of high quality assistance behind the camera to help things along with cameraman Russell Metty keeping everything shrouded in shadows, while Miklós Rózsa provides the score. I suppose some may complain about the use of sets as opposed to real locations but I’m generally happy to see a nicely designed mock-up  (cult director Nathan Juran’s name is listed in the art direction credits, by the way) as I think this is now something of a lost art and it adds a lot to vintage studio productions. For all that, and as I hinted at in the introduction, the film doesn’t quite attain the heights you might be expecting. This is not to say it’s a bad or poor movie, let me be clear about that. Yet there is a certain weakness in the writing, and I don’t know if that derives from the script or the source novel of the same name, but the build up and visuals suggest a far darker experience than that which is ultimately delivered. Even so, this does not amount to a massive flaw and the film, taken as a whole package, is both entertaining and satisfying.

The action revolves around Lancaster and Fontaine for much of the time, the latter working well and playing to her strengths as she gets the timidity and vulnerability of her character across most effectively. Lancaster is fine but, once again, I feel the writing does him a bit of a disservice by failing to explore as fully as possible the complexity of his role. That said, he makes the most of the material he’s given. The other major part is played by Robert Newton, a man who one always fears may use broader brush strokes than are needed. I don’t believe that’s the case here though and he conveys the oily menace of his part quite credibly. 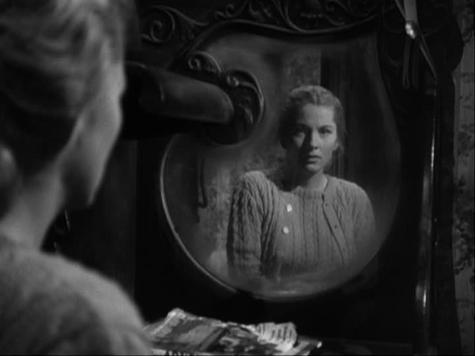 Kiss the Blood Off My Hands was a film I wanted to see for many years – as I said above, the title alone sold it to me – and it was always a matter of frustration that it never seemed to be available or to turn up on TV. Fortunately, there is now a DVD on the market as part of the Universal MOD range. Also, the film has been released in Italy in what I suspect will be a port of the US transfer. The picture quality is sound as far as I can tell, maybe not startlingly good but not seriously compromised in any way either. Overall, I’m delighted to have been able to finally see the film and check another film  noir off the list. So, even if it doesn’t quite make the top tier, it’s easily worth an hour and a half of anyone’s time.