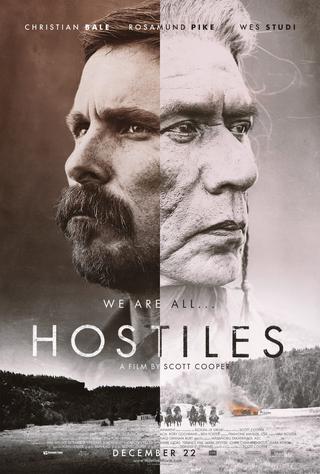 Rumors of its demise, and so on. Every so often one hears of the passing of the western, the obituary of the genre being wheeled out and presented newly polished, typically, in equal parts respectful, regretful and dismissive. The gist tends to run along the lines that it once rose to prominence, becoming the quintessence of Americana, the imagery evoking the culture of a continent in the eyes of the world. And then it, just as it had achieved true greatness, it began its slow decline, growing tired and introspective to the point of unhealthiness, and finally feeling less relevant as its origins fade further into the past. Yet the western is arguably an integral part of cinema (not just an element of its history) and every time a wake is announced it appears somewhat premature. At the risk of mawkishness, the western constitutes the soul of Hollywood filmmaking, underpinning it and forever watching over it. The point of all this is that as frequently as the genre is lamented, just as frequently does it hint at a recovery. In truth, there have been many false dawns, and perhaps the expectations are either misplaced or too high. The western will never again dominate cinema, but a film like Hostiles (2017) suggests, to me anyway, that there are still stories to be told within the framework of the genre that have artistic merit.

The opening is harsh, make no mistake about that. It’s not so much that the violence is graphic (although there is a brief shot that could be described as such) as the fact it has a stark brutality. There are some moments in westerns that are remembered for this kind of frank depiction of frontier ruthlessness: think of Jack Palance’s shooting of Elisha Cook Jr in Shane or Henry Fonda wiping out a family in Once Upon a Time in the West. What Rosalie Quaid (Rosamund Pike) experiences here is on a par with those moments, an emotional gut punch that, quite naturally, leaves her slightly unbalanced for a time and colors her attitude and actions as she journeys through the film. And the whole piece is a journey, literal and metaphorical, following the progress of Captain Joe Blocker, a soldier of fearsome reputation and on the eve of his retirement, as he escorts an old enemy, Chief Yellow Hawk (Wes Studi), from New Mexico to his spiritual home in Montana. Yellow Hawk is a dying man and his request to end his days in this fashion has been granted by the government. Blocker wants no part of this detail but is given no option and therefore sets out consumed with resentment and naked hatred, something not improved by the discovery of Mrs Quaid and her plight. To say more would, I feel, diminish the experience for anyone who hasn’t seen the movie yet, so I’ll confine myself to pointing out that this trek undertaken by a collection of damaged and broken souls is involving from start to finish. It is intense and violent at times but not in any gratuitous or nihilistic way, while the growth and emotional development of the characters is ultimately fulfilling and rewarding. 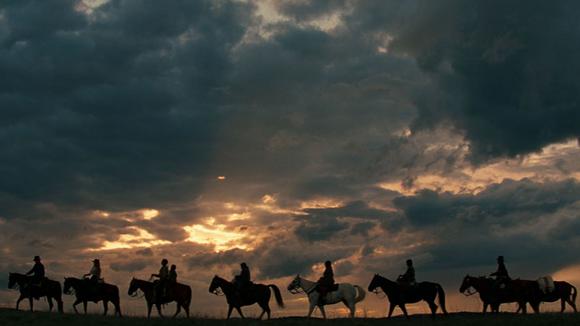 For me, the great appeal of the western is its timelessness and versatility, the ability to tell almost any story in an absorbing and satisfying way. The western always had a way of holding up a lens to the world around us, of taking its setting and trappings and allowing the viewer to examine the world around us through the prism of the past, by focusing on our humanity and reminding us that the challenges we face today have parallels in our past and may well arise again in our future. This is what I see as the central theme of Hostiles: the settling with the past. The film is essentially about characters coming to an arrangement with their own histories and subsequently of growing into an accommodation with themselves. There’s a wonderful moment towards the end of the film where Yellow Hawk and Blocker sit side by side and talk. Blocker tells his one time adversary that when he dies a piece of him will also go with the old chief. I think that’s what the message here comes down to, that confronting our past is not about rejecting it out of hand, but rather acknowledging that some aspects have to be left behind while others are retained and assimilated in order to move forward.

Until now, I’d not seen anything by Scott Cooper but his is a name I’ll be looking out for in future – he appears to have a genuine affinity for the genre and I hope he returns to it at some stage. I always feel westerns are at their best visually when they are shot outside on location and that’s the case here with some wonderful views of the (mainly) Arizona and New Mexico landscape. The only criticism I’d make of the film is the pace is allowed to drop on occasion and I feel the whole sub-plot with Ben Foster’s character is largely superfluous – some judicious cutting/rewriting here and there could have tightened the whole production up. Structurally, thematically and spiritually this movie harks back to the classic era, but scripts then would have been much more streamlined and pared down. 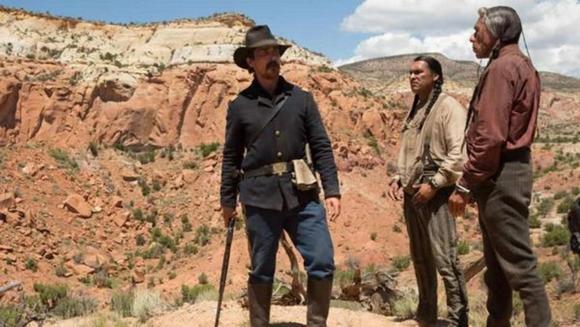 Christian Bale was impressive in his role as the battle-scarred captain, confident and efficient on the outside when faced with the various dangers and threats encountered along the way yet still entirely human as opposed to superhuman in more intimate situations. Frankly, his character arc is hugely satisfying and the end of the film simply feels fitting. What’s more, Bale comes across as wholly convincing as a westerner, a quality which is not so common among leading men these days. Wes Studi is no stranger to westerns of course and he gives another typically authentic performance that’s marvelously quiet. I also thought Rosamund Pike did fine work with just the right kind of vaguely off-center detachment to suit her part. It was nice too to see Stephen Lang, although he’s really only in the movie briefly.

So, Hostiles generally worked for me, and it’s been a good few years now since I came away from a cinema with that feeling about a western. I’d like to think  it might perform well enough to keep the genre from drifting off towards the sidelines immediately. I don’t think it’s a game changer but it’s a mature piece with a solid emotional core and well worth the time of anyone who has an interest in quality western movies.