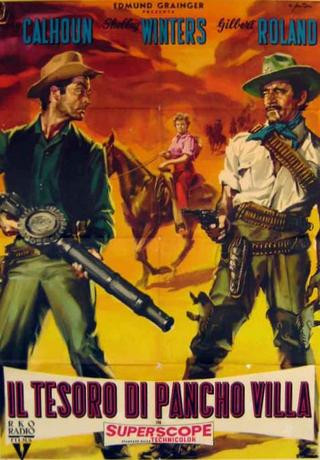 Last time I had a look at a political thriller and noted how the politics, in the classic style of the Hitchcockian McGuffin, acts as a powerful motivation for the characters inside the drama while remaining nothing more than a plot device in the eyes of the audience. The classic western rarely went down the overtly political route and tended to reserve its commentary for broader sociological and philosophical issues. Even in those cases, messages were, as often as not, delivered via implication and with the kind of subtlety which left it up to the viewer to decide how much or how little attention to give them. More direct political points could be said to appear in films set on the Mexican side of the border, and in particular those which make explicit reference to the revolution. The Treasure of Pancho Villa (1955) plays out in such an environment, a number of the characters being clearly driven by their convictions and stating that fact on a few occasions, but this really isn’t the main focus of the movie, neither from the perspective of the figures on screen nor we who watch them.

The post-credits caption places the events in 1915, right in the middle of the revolution. Tom Bryan (Rory Calhoun) and Juan Castro (Gilbert Roland) are under siege in wilderness and taking a breath, ruefully commenting on their fabulous wealth as the Federales creep ever nearer. Somewhat paradoxically, we find ourselves beginning at the end of the tale as follows on from his point is delivered via flashback. The machine-gun wielding Bryan is the classic mercenary figure, tough and bluntly proud of his own love for cash and corresponding disinterest in ideals. He’s introduced providing the firepower to facilitate the raids necessary to secure the finances Villa needs to stay in the revolutionary business. Despite professing a desire to retire and enjoy the profits of his toil, he finds himself drawn back into one more caper – all in the name of friendship. Castro is one of Villa’s colonels and Bryan’s fiend, and it’s hard to say no to an old friend when he asks you to help take a gold-laden troop train and then transport the spoils overland. Initially, the American seems to have been swayed principally by the rewards promised, but the presence of an idealistic woman (Shelley Winters), also from the US, and a shifty bandit (Joseph Calleia) who has a score to settle with Castro play an increasingly important role. 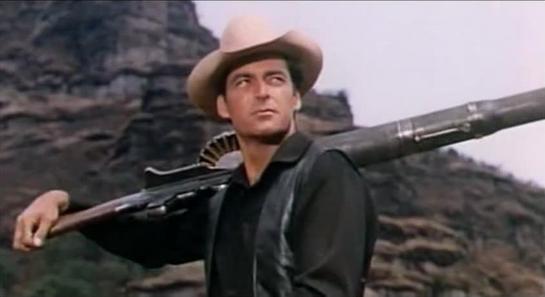 I can’t get enough of George Sherman’s work, particularly those films made in the 1950s. I find it addictive and entertaining, becoming progressively stronger and more complex as the decade wore on and building towards such beautifully realized pieces as The Last of the Fast Guns. I mention that movie here because not only is it arguably Sherman’s finest and most accomplished, but it also shares some features whose roots can be seen in The Treasure of Pancho Villa. The setting is, of course, the obvious link and a number of locations appear in both productions. There’s even something on the costuming of the leads – Calhoun is clad predominantly in black with Roland largely favoring white, which seems to be foreshadowing the completely black/white outfits adopted by Mahoney and (again) Roland in the later film. Still and all, it’s that theme of redemption which never ran far below the surface of any 50s western that draws the attention more. Sure there are some noble words on freedom and justice voiced by the characters (mainly Winters) but such proselytizing is rarely interesting or effective in my opinion, and I get the impression that neither Sherman nor screenwriter Niven Busch were all that enthused themselves. Instead, greater emphasis is given over to more personal motifs – loyalty, friendship and the discovery of something deeper and more meaningful within oneself.

Calhoun had a terrific run in westerns in the 50s and this film offered him an excellent showcase for his talents. The hard-boiled mercenary with one eye ever on the main chance  was the type he could carry off in his sleep, and the way that role then develops and becomes more textured as the story progresses shows that he had sufficient depth when called upon. I’m struggling to think of a part played by Gilbert Roland that I didn’t enjoy – the energy he invested in his characters is quite infectious and it’s easy to be swept along by his charm. Any film that saw him handed an expanded part is invariably worthwhile. On the other hand, I’ve rarely been all that taken with Shelley Winters – too often she was assigned needy and, ultimately, irritating roles. While that’s not the case  in The Treasure of Pancho Villa, she’s asked to play the kind of starchy and self-righteous woman who again fails to elicit a lot of sympathy. This is a weakness in the film for sure, however, everything is handily shored up by a great bit of villainy and duplicity from the typically excellent Joseph Calleia. 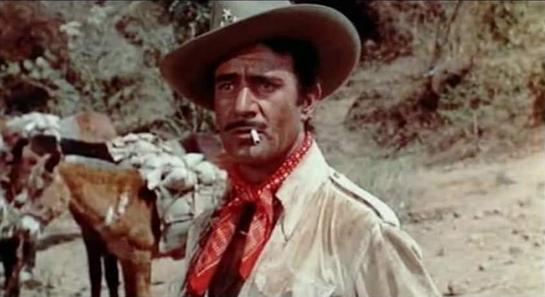 Generally, where possible, I like to make some comment about the availability of films which are featured on this site, not least because people often wonder about the relative merits of what copies are currently on the market. In the case of The Treasure of Pancho Villa, there is a DVD which has been released in Spain (also, I think there’s an Italian version – possibly the same print –  too) but the quality is frankly poor and it’s not a disc I’d be happy to recommend to anyone. I’ve heard rumors before that Warner Brothers in the US is working on a restored version of the title and I’d like to think that is true – this is a fine movie and it deserves to be seen in far better quality that what is out there right now. The setting in revolutionary Mexico almost immediately conjures up images of spaghetti westerns, and in turn the image of the lead with a machine-gun might well make you think of the likes of Django. Nevertheless, this is very definitely a western out of the classic mold, with all the sensibilities that implies – very enjoyable and highly recommended.

46 thoughts on “The Treasure of Pancho Villa”