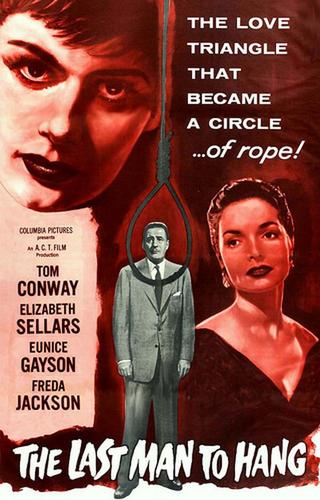 The whole notion of justice is a marvelously complex area. The entire history of civilization could be seen as an attempt to define exactly what that word means, what it is and how it is applied in practical terms. It underpins our understanding of the law and its purpose, and of course the law in all its forms is integral to many a piece of drama. Within this is the sub-genre of the legal or courtroom thriller, which brings me to The Last Man to Hang (1956). The title alludes to contemporary shifts in attitude in relation to the death penalty but that aspect, while mentioned and acknowledged, is very much subordinated to the central question of whether the man referenced is to be found guilty or not.

The plot revolves around Sir Roderick Strood (Tom Conway), a music critic who is arrested and charged with the murder of his wife Daphne (Elizabeth Sellars). A good deal of the story is recounted via flashback as Strood  briefs his QC (David Horne) on the events leading up to the fateful evening. Essentially, the film is constructed of three parts – the preparation for the trial, the trial itself, and then the deliberations and verdict reached by the jury. The first section sees the accumulation of a significant amount of circumstantial evidence not helped by the damaging fact that Strood was conducting an extramarital affair with a singer (Eunice Gayson) and building up a lot of ill-will from his wife’s vindictive maid (Freda Jackson).

Then comes the trial at the Old Bailey, where counsel for the defense and the prosecution elegantly present the facts, and interpretations, they hope will swing the case their way. And finally, it’s passed on to the jury, the dozen men and women handed the responsibility for sifting these facts and ultimately deciding whether the man before them is to live or die. 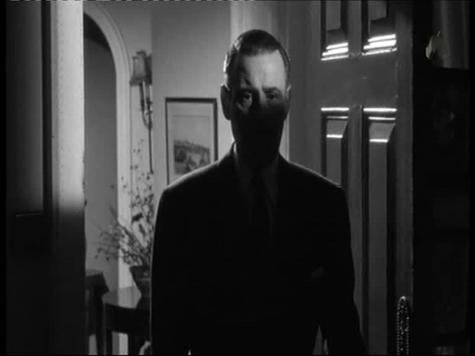 The Last Man to Hang was adapted from The Jury, a novel by Gerald Bullett. I recently picked up a copy of that book, heavily influenced by the great looking cover art of Pan books of that era, and although I have yet to read it I was keen to see how the movie version was. Actually, I wonder now whether the book tells its story in exactly the same way – the film presents the viewer with a vital fact early on (which I’m not revealing here) and I’m not quite sure if that was the best approach or whether it serves to increase or reduce the tension. In my mind, the jury is still out (apologies for that dreadful pun) on that score but it may concern others less. The director for this film was Terence Fisher, and while The Last Man to Hang wasn’t a Hammer production  it’s difficult not to think of him as the studio’s principal shot caller now and therefore unconsciously make comparisons. With that in mind, I think it’s fair to say Fisher’s direct and economical shooting style is apparent all the way through.

Top-billed Tom Conway was an actor whose career was on the downward curve by this stage. In the 1940s, even if he never reached quite as high as his bother George Sanders, he had done good things in three of the best Val Lewton films, a handful of nifty films noir (including one for Anthony Mann),  and had also taken the lead in the long running The Falcon series of B mysteries. He was making a number of movies in the UK at around this time – the other two or three I’ve seen being reasonably entertaining – and about to move towards more television work. His role as the adulterous and conscience-stricken defendant is a large one, giving him plenty of screen time and he is his usual suave self. There’s a restraint there (some might say too much) but I think it works and suits the self-critical reserve of his character.

Aside from Conway, the cast of The Last Man to Hang is deep and impressive. The three major female roles are all well handled. Elizabeth Sellars gets the moody obsessiveness of her character spot on and you can clearly see the frustration she inspires both in her husband and in herself. Freda Jackson, a familiar face in British cinema, is wonderfully malicious and spiteful as the maid whose twisted devotion plays such a pivotal part in the plot. And future Bond girl Eunice Gayson, who just recently passed away, is quietly effective and indeed affecting in her small but vital role. In the courtroom scenes, David Horne and Raymond Huntley battle with distinction while judge Walter Hudd looks on. Of the jury members, Victor Maddern stands out as the stubborn type who could have given Henry Fonda a run for his money in 12 Angry Men.

Sadly, The Last Man to Hang has yet to be released on DVD anywhere. However, it does turn up on TV, in what is probably a cropped 4:3 version, and has done so recently, which is how I managed to catch up with it. The movie was distributed theatrically by Columbia so the rights may still reside with the studio. This is an absorbing courtroom tale, examining the concept of justice in both  criminal and personal terms and is well enough made with a memorable cast to attract an audience still. I’d hope some company might find a way to get this on the market at some stage.