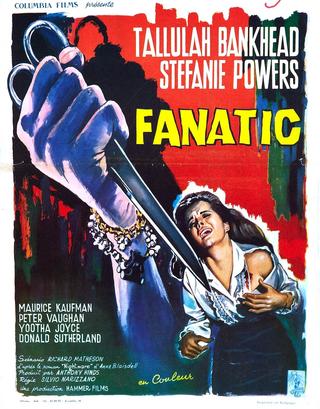 Pressing ahead with more Hammer, let’s step forward a few years to look at the next stage in the development of the studio’s thriller output. The influence of the early films noir could still be seen in the black and white, Jimmy Sangster scripted suspense yarns with their trademark twist in the tail. Fanatic (1965) was something of a departure, shot in color and taking an entirely different thematic tack. If the previous template had been the noir-edged Hitchcock homage, then the new version was more in line with the “crazy old lady” sub-genre popularized by Robert Aldrich’s Whatever Happened to Baby Jane? at the beginning of the decade.

Generally, I like to give an overview, or at least some flavor of the plot at this stage. I tend to simply touch on details as I reckon it’s poor form to drift into spoiler territory for those who may not have seen a given movie, and it’s also a lazy and slightly pointless way of writing. I’ll be brief here too but for perhaps different reasons on this occasion, namely the simplicity and directness of the plot. In essence, it concerns Patricia Carroll (Stefanie Powers), a young American girl who has come to England to be with her fiance, but who also has in mind a short visit to the family of a previous lover who passed away suddenly. That family is limited to the mother, Mrs Trefoile (Tallulah Bankhead). At first, the old lady in her crumbling home and surrounded by the oddball help appears a mild eccentric with too little company and too many religious hangups. Later though, Patricia discovers that those convictions are of the deep-seated variety, of the fanatical type in fact. And the plan is for Patricia to spend  a lot more time in the house… 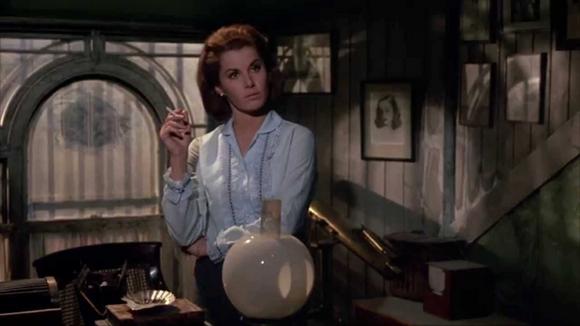 OK, I’ve a confession to make here: while I’d say I was a fan of Hammer studios and all their varied films, I’m not at all fond of this particular sub-genre. I remain adamant that the likes of Whatever Happened to Baby Jane? is vastly overrated, and I far prefer Aldrich’s more subtle, and ultimately more affecting, Hush… Hush, Sweet Charlotte. Now when it comes to Hammer, I’d rate The Nanny far above Fanatic in the “crazy old lady” stakes, and for broadly similar reasons. I think the issue for me is the level of camp involved. Films of this kind tread a fine line between grotesque farce and a more genuine brand of psychological tension. In my opinion, the greater the camp quotient, the greater the risk of tipping over into a mean parody. Fanatic starts off with what I feel is a broad and farcical tone, before plunging into deeper and darker waters. However, I think that detour towards meanness then appears magnified. Essentially, there’s too much mean – the heroine becomes objectified via her ordeal and the villains are too stylized to ever seem real.

Fanatic looks like it had been, and probably continues to be, heavily reliant on the presence of Tallulah Bankhead in the role of the demented Mrs Trefoile. Now, if I’m honest, I’ll have to say I’ve not seen much of this actress’s work. Aside from Fanatic, I’ve seen (and liked) Hitchcock’s Lifeboat but that’s it. I suspect that’s the extent of most people’s experience of Bankhead as an actress but her legend, driven by a range of professional and personal activities, is such that her name was and is a strong selling point. However, I reckon a performance should be evaluated on its own merits rather than any other influence and, on that basis, I’m going to probably go against received critical response here and say I wasn’t overly impressed. Frankly, there’s an archness and an air of aloof knowing that severely limits the credibility for me – where I longed for cool menace I got pantomime instead.

I’m guessing Stefanie Powers would have been regarded as more of a lightweight at this stage but, conversely, I found her performance more successful. It’s a difficult role – her character is driven right to the edge – but she handles it very well, going from carefree to desperate, and finally emotionally numbed with ease and confidence. Yootha Joyce is fine too as the repressed and nervy housekeeper but I feel Peter Vaughan, as her husband, is a little mannered and consequently less convincing. There’s also an early, undemanding, part for Donald Sutherland.

Fanatic is another title in the first Hammer box set released as a limited edition by Powerhouse/Indicator. Once again, I found the visual presentation to be of a typically high standard with a clean, sharp transfer and exceptionally fine-looking color and detail. The supplements are as usual a big part of what makes these releases so attractive, featuring newly filmed pieces on the movie, on Bankhead, the composer and interviews with crew members. I admit I’m not as enamored of the film itself as some will be but there’s no denying the quality of the package presented here.