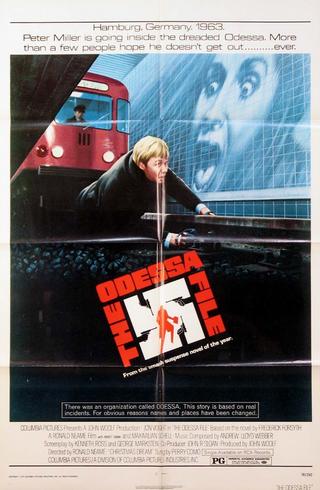 Events that can change history sometimes hang on tiny chances. If I hadn’t pulled to the curb, I wouldn’t have caught the traffic light, nor seen the ambulance, never have heard of Salomon Tauber or Eduard Roschmann. Nor got involved with the agents of Israel, or with the sinister and deadly men behind the Odessa. That night I was just a reporter with a nose for a possible story.

Those are the first lines spoken by Peter Miller (Jon Voight),  the lead character in The Odessa File (1974). I’ve mentioned fairly recently how many a film noir turns on the fickleness of fate, the way chance steals across one’s path and leads to the making of a decision, either rash or considered, thus altering the whole shape of the protagonist’s world. This is not a film noir, it’s an espionage tale but quite a dark one, where the present future and past of the lead crash together in a kind of existential pile-up, the grim past and vaguely pathetic present colliding and sending the characters on a quest to try to fit all the shattered fragments in place again.

Peter Miller is a freelance journalist, and inordinately proud of this fact, boasting of it to his girlfriend, and exotic dancer who it’s strongly suggested is bringing home the lion’s share of the money the young couple need to survive in 1960s Hamburg. This timeline is important; we’re less than twenty years on from the end of WWII; the deep wounds of that terrible conflict had not yet healed themselves, much less had the ghosts been exorcised. When chance knocks at Miller’s door it presents him with the diary of an old concentration camp inmate, a man who has just taken his own life. Reading through the journal piques Miller’s interest – the complete reason why only being revealed much later in the day – and sets him off on a course which will take him from the depravity of the death camps and Roschmann (Maximilian Schell), the commandant, right up to the contemporary world where the tentacles of the Nazi Odessa organization have taken a furtive yet firm hold.

The Odessa File is an adaptation of the Frederick Forsyth novel of the same name, and (based on an admittedly not always reliable memory) remains fairly faithful to that source. Director Ronald Neame and cameraman Oswald Morris shoot the flashback scenes portraying events in the Riga camp during the war in stark black & white, and the contemporary 60s action in color. The technique is effective and is successful in that it never draws attention to itself and has a seamless quality. The structure is the classic search for secrets buried in the past but still impacting on the present and it’s one which is almost always enthralling. With the worrying and apparently relentless rise of the extreme right across the western world these days, One has to wonder if the theme here of the danger of an ever vigilant extremism patiently awaiting the opportunity to seize the reins one again isn’t every bit a prescient now as it was back in the early 1970s.

Jon Voight makes for a personable and credible lead. It’s easy enough to imagine him as a driven journalist and, while there are action sequences, has the everyman quality that we see less and less of in these days of virtually superhuman leads. The journey he embarks on, both professionally and personally, is never less than fascinating and his sympathetic playing is a large part of what makes it work. Maximilian Schell is the other big name in the cast, the malign presence of his venal character haunting the picture even when he’s off screen for long stretches. And the climactic confrontation between Voight and Schell is both revelatory and satisfying. In supporting roles, there is attractive work done by Maria Schell, Derek Jacobi, Mary Tamm, and Klaus Lowitsch as a dangerous and determined assassin.

The Odessa File on Blu-ray is part of the new slate of releases from Indicator/Powerhouse and this latest limited edition gets a fine transfer from a 2K restoration. The scope transfer is smooth and tight, with that moody look often found in 70s cinema. As usual, the extra features are a significant part of the release, from the 21 page booklet containing a mix of original writing on the film and also an extract from Ronald Neame’s 2003 autobiography. On the disc there are two hour long interviews carried out at the National Film Theatre, one with Neame and the other with Oswald Morris. Also included are short filmed pieces with other crew members. This is another strong release of an entertaining movie that continues to feel relevant more than 40 years after it was made. I believe it’s well worth checking out, or revisiting, and this is a nice presentation.