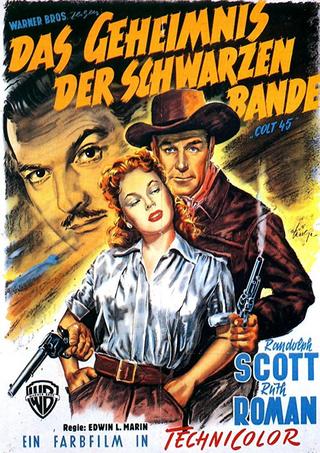 In  almost a dozen years of writing about a wide range of movies in general, and westerns more than any other genre, I’ve tried to point out the type of film I happen to be talking about mainly in relation to theme, and digging down to cast an eye over subtext where appropriate. From time to time though, that approach is unsuitable for the simple reason that the movie in question was conceived and shot as an almost pure exercise in entertainment. Now this is just an observation, a statement of fact as I see it, and not a criticism of the work. I see Colt .45 (1950) very much in that light, a movie primarily concerned with delivering an hour and a quarter of polished and fast-moving diversion, with no more than the occasional flick of a hat brim in the direction of meatier matters.

There have been a handful of westerns borrowing their titles from firearms – Winchester ’73 and Springfield Rifle, for example – and thus building the plot around the importance of those weapons to the characters. Colt .45 is all about the famous revolvers and how their use or misuse affects the lives of those who come into contact with them. One could, I guess, argue that there is a point to be made, and one which is indeed alluded to, concerning the ethics and responsibilities of guns and their users. However, it’s not expanded on in any great detail in the movie and therefore not an aspect I’m going to delve deeply into either – I’m sure there are a variety of opinions on the issue and I want to head off any potential friction by pointing out that there are many other fora to be found around the internet better suited to the expression of any such views so I’d be pleased if we could refrain from setting off down that particular path here.

Leaving that aspect aside, what we have is a pretty straightforward quest for justice yarn as pistol salesman Steve Farrell (Randolph Scott) finds himself not only robbed of the guns he’s been promoting, but also accused and imprisoned as an accomplice of the man who stole them. That man is Jason Brett (Zachary Scott), an ambitious sociopath who sees his new acquisitions as a handy means of obtaining the money and power he covets. The plot is essentially the story of Farrell’s determination to get the guns back and restore his own reputation. Along the way, he will encounter a weak-willed miner (Lloyd Bridges), his tough and resourceful wife (Ruth Roman), and a corrupt and dissembling sheriff (Alan Hale). 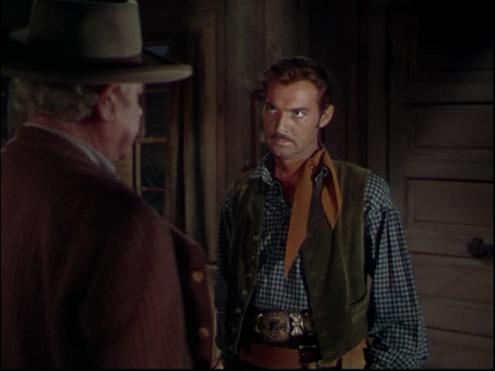 As I said above, the film doesn’t have a great deal of depth, but nor has it any  pretensions. It’s aim is to tell a familiar story in a brisk and  breezy manner, and it fulfills that ambition admirably. The main highlight in director Edwin L Marin’s filmography is possibly the very enjoyable John Wayne/Ella Raines western Tall in the Saddle. He’d made a lot of programmers including a couple of Philo Vance mysteries before moving on to a number of noir thrillers with George Raft, and had then seemingly settled into a run of solid westerns with Randolph Scott before his untimely death at the age of 52. Colt .45 is a pacy affair, packing a lot of story and incident into its brief running time and even manages to paint its Indian characters in a positive and sympathetic, albeit a very superficial, light. A major plus is the Technicolor cinematography of Wilfrid M Cline which has both the interiors and the location work on the Iverson Ranch looking especially fine.

I can’t help thinking of Colt .45 as a Saturday afternoon movie, partly because of its no nonsense approach but also because that would have been how I first experienced it on TV at some time back in the mid or late 1970s. Randolph Scott was a great hero to me as a small boy and those screenings of his westerns were a big influence on my view of cinema during my formative years. Somehow, that has never left me and I still get a buzz when I sit down and revisit one of these fast-moving efforts. Scott is a typical straight arrow in this, with all the pride and nobility that was innate to him but lacking the complexity and inner hurt he would perfect in the coming years – sure there is a touch of emotional bruising there but it’s not explored to any extent. 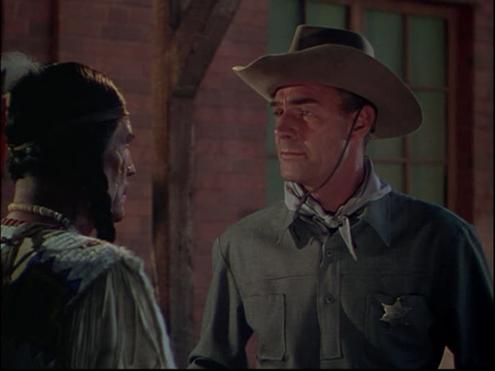 Zachary Scott is a sound villain, probably too loud and overbearing at the beginning but dialing it back and settling down as the plot unfolds and his character nears his goal. In many ways, the strongest presence in the movie is that of Ruth Roman. She always had an air of a tough broad on screen and gets plenty of opportunities to play a dominant part in this movie – doing some hard riding, getting shot, blasting her way out of captivity and even knocking the leading man out cold at one point. In contrast, Lloyd Bridges is all hand-wringing  angst and self-doubt as her ineffectual husband, a neat study in weakness and venality in fact. And a word too for Alan Hale in one of his last roles. For me, he’ll forever be the sidekick of a laughing and swaggering Errol Flynn, a slightly bumbling but true companion. There’s still a suggestion of that twinkle in his eye as his sheriff attempts to play the two ends against the middle, and it’s a pleasure to see him grace another movie for the studio with which he did such great work over the preceding two decades.

I’m not sure how easy it is to locate Colt .45 for viewing these days. It was released on DVD a good few years ago by Warner Brothers as a triple feature, with Fort Worth and Tall Man Riding, but that might be out of print now. Anyway, it’s a most enjoyable western, of that type which seeks to occupy and engage you for a little over an hour and does exactly that with considerable ease.