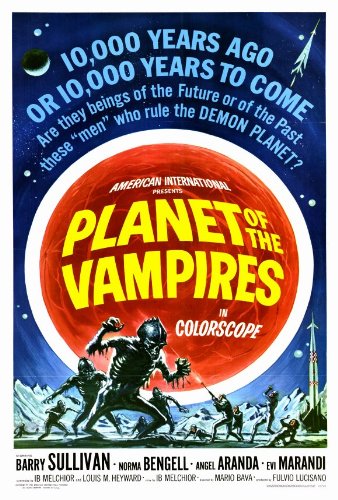 Impressions and influences, those are the two items on the agenda today. It wouldn’t be much of a movie that didn’t make some kind of an impression, good or bad, on viewers, and I want to focus on those which I was aware of as I watched Planet of the Vampires (1965), the Sci-Fi chiller from Mario Bava. And then there’s the question of influence, which is something of a two-way street as far as I can tell, and all part of the evolutionary chain running through cinema from its infancy right up to the present day.

Distress signals in Sci-Fi rarely bring anything good, and Planet of the Vampires certainly doesn’t challenge that truism. This is what draws the ill-fated crews of two spacecraft to the planet Aura, and ultimately dooms them. We follow events from the perspective of Captain Markary (Barry Sullivan) as he becomes increasingly aware of some presence on the planet which is capable of influencing the  thoughts and actions of his crew, driving them so far as to attack and kill their own comrades. In itself, that ought to be enough to worry anyone. However, when dead crew members start to reappear looking to add to their number, and the remains of another, clearly alien spaceship, suggest something similar has happened before, well… 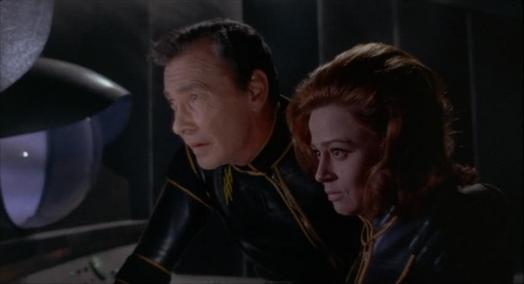 For me the standout feature of Planet of the Vampires is the distinctive look. The image of astronauts clad in black leather roaming across a psychedelic technicolor landscape, all the while being stalked by vampire/zombie hybrids, is a striking one. Even when the plot doesn’t always seem to make sense, when the meaningless techno-babble makes one’s head spin and the characters insist on placing themselves in needless danger time and again, those visuals are what help to keep one’s attention focused.

There are plenty of people who will tell you that this movie was a big influence on Alien, which came out 15 years later, and I guess there is a strong case to be made for that. While I’ve not done  much reading up on this myself, I have a hunch it’s been well covered elsewhere so there’s not to be gained from my serving up the same stuff. What I noticed more were the influences it seemed to draw inspiration from, namely Invasion of the Body Snatchers. The whole notion of sleep bringing damnation as opposed to succour is hard to miss. Even if the message about relaxing (one’s vigilance) being potentially fatal loses some of its punch stripped of the paranoid Cold War subtext, it remains potent on an everyday level.

Anyway, there you have it, a much shorter piece than I normally like to post, with a few random musings thrown in there. It’s not down to laziness on my part, or any lack of affinity for the movie in question, but instead the pressure of demands on my time in the run up to the holidays. I doubt I’ll have time to put up anything else between now and Christmas, so I’ll use this (admittedly unseasonal) offering as an opportunity to wish a merry, peaceful and relaxing Christmas to all who stop by here.