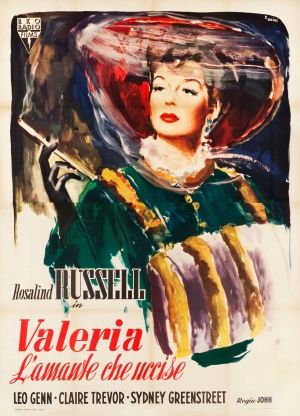 Guilt, fear and suspicion – these are all key characteristics of film noir. Marry those elements to the duplicity inherent in the world of the theater, where the necessity to don and discard the masks of performance, and the result should be a richly cultured blend of deceit. These circumstances provide a wonderful source of drama and melodrama, one tapped regularly by filmmakers. Sometimes the world of moviemaking itself becomes the main focus, while on other occasions it is the older and grander backdrop of the traditional theater. The latter forms the setting of The Velvet Touch (1948), where ambition, desire and tangled relationships on and off the stage see barbed witticisms replaced by a blunt instrument, resulting in tragedy.

In a sense, the whole movie could be summed up as a shift from comedy to tragedy. The leading lady of the story, and the leading lady of the Broadway production which has just reached the end of its run, is Valerie Stanton (Rosalind Russell). She has earned success and renown as a star in light comedic roles yet that pebble in the shoe of human nature that picks at many a person, and most especially the protagonists of film noir, is present. Yes, dissatisfaction is whispering insistently in Valerie Stanton’s ear, urging her to spread those artistic wings and set off and explore new areas. That alongside a new romantic relationship with an architect Michael Morrell (Leo Genn) is pushing her ever closer to a break with the past. And the break is a clean one when it does come, just as clean and sharp as the blow she strikes her producer and former lover Gordon Dunning (Leon Ames). This is essentially where the viewer comes in, literally in through the window of Dunning’s office, gliding in from the neon lit New York sky to witness the end of a highly strung and threat filled argument, the end of one man’s life and the beginning of a fresh ordeal for others. Shortly afterwards the movie dissolves into a lengthy flashback as Valerie reflects on the circumstances which led, step by relentless step towards this moment of violence. What follows is an investigation into the death conducted by the shrewd and reassuringly portly Captain Danbury (Sydney Greenstreet), an investigation that sees suspicion fall on the devoted but spurned Marion Webster (Claire Trevor). With dread and self-interest setting the pace and driving events into still darker corners of morality, the climactic denouement hints at life imitating art and those lines separating the the performer and the performance becoming blurred once more. 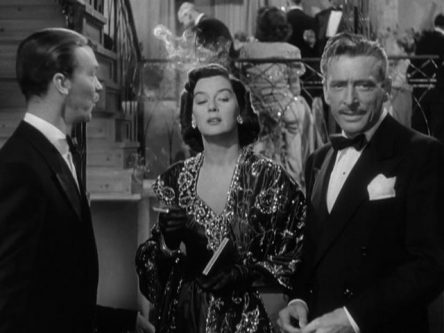 Those blurred lines  recall A Double Life to an extent, but even so I don’t think the similarities run too deep. Sure there’s the theatrical setting and the star, although only towards the very end of the story here, seeing aspects of her personal life and circumstances mirrored in the role she has taken on, Ibsen’s Hedda Gabler in this case. While The Velvet Touch is a good picture, attractively shot by Joseph Walker from a Leo Rosten (Sleep, My Love) script, it doesn’t have the same depth. That Rosten screenplay has some wonderful dialogue, as sharp and incisive as a scalpel and devilishly funny too; the exchange between Genn and Russell when they first meet at a party and he feigns ignorance of her celebrity is a delight. Some of that may be down to director Jack Gage too. He started out in the business as a dialogue director on  René Clair’s ever charming I Married a Witch as well as Double Indemnity for Billy Wilder. He then fulfilled the same role on  several pretty good melodramas, with Barbara Stanwyck (My Reputation), Bette Davis (A Stolen Life), and Rosalind Russell in Eugene O’Neill’s Mourning Becomes Electra before landing his one and only credit as a feature film director.

I will have to admit  that I’ve never been a great fan of Rosalind Russell. That said, I do admire her work and in particular I admire what I think of as her courage in embracing certain roles – for example, Joshua Logan’s Picnic sees her throw herself into her character in an extraordinarily challenging way. The part of Valerie Stanton is not an especially attractive one. Admittedly, she is wronged in some respects but her egoism and fealty to her own ambitions, whatever the cost to the innocents around her, is desperately unpleasant. It requires guts and great self-confidence from a performer to undertake such roles, and it is to Russell’s credit that she didn’t shy away from the more unsavory aspects. Claire Trevor rarely disappoints and turned in another excellent piece of work in the same year that she would win the Best Supporting Actress Oscar for her humiliated moll in John Huston’s Key Largo. She got across the bitterness and hurt of the perennially wronged woman perfectly, bringing a considerable amount of dignity to it all.

I often wish Sydney Greenstreet had made more movies. That imposing physical presence in tandem with his rich and unmistakable voice could be employed with equal success to comedic, dramatic and outright villainous roles. I have seen almost all of the films he appeared in and it is safe to say he enriched every one of those. His entrance in The Velvet Touch is terrific. Moving onto the stage to interview the assembled cast, he at first projects an air of vague menace as he casts a fishy eye over the nervous group in front of him. His gaze shifts then to the pitifully small chair at his disposal as he lowers his bulk with trepidation onto it, and breaks into an avuncular chuckle in full recognition of the absurdity of it all. It is a beautifully played aside, milking the tension expertly before leavening it with some much needed humor. Of the others, Leo Genn is debonair and smooth, Leon Ames is brimming with malice and energy and primed for a deserved fall, Dan Tobin radiates a knowing whimsy as a conceited critic, and Frank McHugh gets another chance to practice his patented puppy dog enthusiasm.

The Velvet Touch has been released on DVD in the UK by Odeon and in the US by Warner Brothers so it should be easy enough to track down. It’s a solid noir melodrama set amid that theatrical milieu that this viewer never tires of and has a handful of strong performances to recommend it. I recommend it.