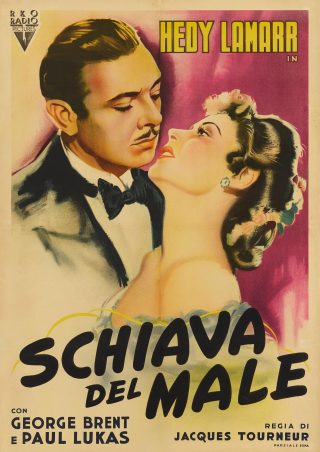 That’s a loose translation of the words of Hippocrates, words first written over two thousand years ago and borrowed so as to be uttered by one of the characters in Jacques Tourneur’s Experiment Perilous (1944). There’s truth in that quotation, as there is in so much of what has been passed down over the centuries from those great men of the ancient world. It could be seen to apply to the limited time the characters in the movie have to react and respond to the events that unfold around them. Looked at now in retrospect, it might even be said to act as a neat descriptor of the career of Jacques Tourneur himself. His fairly lengthy apprenticeship segued into the comparatively brief period of peak creativity, a period that could be roughly defined as starting from 1942 when he made the first of his stylish hauntings for Val Lewton with Cat People and running through to 1957 when he so successfully recaptured some of that sensibility in Night of the Demon.

Experiment Perilous is a classic Gothic melodrama with a hint of film noir drifting around it, perhaps in the vague dissatisfaction that colors the moods and attitudes of its principals as much as anything. All through the movie there is a suspicion of something not quite right, of a group of people hurrying about their business and their lives amid an almost permanent state of flux and turbulence. Much of the story takes place in appalling weather, with only the brief flashbacks to the past appearing to offer a glimpse of brighter and calmer times. The present, on the other hand, seems to lurch from one stormy tableau to another, presenting a background that is forbidding enough to drive the characters indoors for much of the time, seeking shelter from the elements without yet finding other more insidious threats lurking within.

It all begins on a train, carving its way east through the night and assailed on all sides by a raging downpour. It is that lashing handed out by nature that provokes a fateful encounter between psychiatrist Hunt Bailey (George Brent) and a fluttery and nervy woman sharing the same car. Both are headed back to the city, back to work in the doctor’s case while the lady is on her way back to see her brother and his wife after a long absence. She is a faded type, ethereal and quirky enough to pique his interest and sympathy. Were it not for a mix up with the luggage on arrival in New York, and then the fact he later overhears a throwaway remark about the woman’s sudden death, he would most likely have thought no more of the incident. However, there was something in the woman’s words and manner, and of course her unexpected demise, that arouses his curiosity and prompts him to take advantage of an opportunity to meet the relatives she spoke of.

Nick Bederaux (Paul Lukas) fits the stereotype of the turn of the century European sophisticate, cultured, moneyed and impossibly debonair. There is something a little “off” about him though, his charm and politeness bordering on obsequiousness. Bailey senses that on their first meeting and it is further heightened when he is introduced to Bederaux’s wife Allida (Hedy Lamarr). She is a delicate beauty, like an exquisite piece of Dresden china which Nick has procured and now keeps on display in his oddly oppressive brownstone. Bederaux takes the opportunity to confide in Bailey that he worries about the psychological state of his wife, and the effect it may be having on their young son. More suspicious than convinced by these pleas, the doctor agrees to examine Allida with the unstated intention of delving deeper into the secrets of Bederaux himself and the tragic past which may be impinging on the future of his wife and son.

Experiment Perilous came out the same year as George Cukor’s Gaslight (which was a remake of Thorold Dickinson’s British movie), exploring a very similar theme and with a plot that follows a very similar arc. This does not have the gloss and polish of Cukor’s film, but the director brings his own special touch to it. One of Tourneur’s defining characteristics was his subtlety, never overcooking a situation of overstating a point. I appreciate that quality – it is a stylistic fingerprint to be found all over his work for Lewton and is evident too in his other productions – and what appeals most to me about such an approach is the fact that it shows a sincere respect for the intelligence of the viewer. The plot of Experiment Perilous is relatively straightforward and there are few surprises yet the stylish way in which Tourneur guides us through it all ensures it never drags. There is a refreshing frankness about the relationships too and the dynamics that power them. While the production code of the time would never permit such a direct admission, Tourneur’s sensitivity and assurance means the motivation at the root of Bederaux’s jealousy is alluded to in such a way that the observant viewer is led to believe that the character is essentially impotent. It speaks volumes about the director’s skill that he is capable of weaving such themes into the fabric of the narrative, of blending in layers of maturity, without needing to resort either to crudity or falseness.

Hedy Lamarr was of course a famous beauty but her acting ability should not be discounted. The role of Allida Bederaux called not only for vulnerability on her part but a degree of gullibility too. Bearing in mind what an intelligent and accomplished woman she was outside of the movie business, it’s all the more laudable how she managed to successfully essay the helplessness of her character – I guess that characteristic catch in her voice helps some. Anyway, her performance contains a lot of warmth and credibility. George Brent was a good choice for the lead, bringing his own brand of humility and empathy to a character who is not written as an especially interesting figure. Perhaps that was one of Brent’s great strengths, his knack for portraying essentially bland characters and investing them with a humanity it was easy to relate to. He was a solid and reliable presence in many a movie (I felt he was exceptionally good opposite Barbara Stanwyck in Curtis Bernhardt’s My Reputation) although he did not always appear to be the most exciting, which seems slightly odd if you stop to think that here was a man whose real life exploits saw him forced to leave his native Ireland during the War of Independence with a price on his head. Paul Lukas co-starred with Brent in two other movies – of those, I have Temptation lined up for viewing at some point in the future. There is great precision about his playing, an economy of expression if you like, that suits the buttoned up nature of Nick Bederaux so well. Of the supporting cast, Albert Dekker gets the mix of passion and dissipation just right as Brent’s artist friend, while Olive Blakeney is sweetly neurotic in her relatively brief screen time.

Experiment Perilous is not the hardest movie to access these days, having had DVD releases in the US (via the Warner Archive), the UK and France, and probably other territories too. As a long time fan of Jacques Tourneur’s work I consider it an easy recommendation.