One thing leads to another. A few weeks ago a bit of discussion on remakes came up, or to be more precise the relative merits of both Thorold Dickinson’s and George Cukor’s versions of Gaslight. Not long before that I’d been looking at Richard Boone in a movie directed by Bruce Humberstone, and it then occurred to me that Boone had starred in a remake of one of Humberstone’s earlier movies. Anyway, that meandering thought process led me back to Vicki (1953), a reworking of the proto-noir I Wake Up Screaming. Generally, I like to approach or assess movies on their own terms, as discrete pieces of work, where possible. Remakes make that a little trickier of course, particularly when one is very familiar with the other versions. Viewed on its own, Vicki is a moderate noir thriller of ambition, obsession and murder. 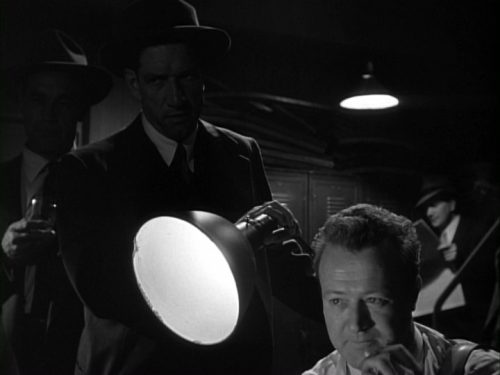 Vicki Lynn (Jean Peters) is a model, something which is immediately apparent from the opening shots of billboards and sundry advertisements, all prominently featuring her name and image and urging Joe Public to buy whatever it is she happens to be selling. However, perhaps I should have started off by stating that Vicki Lynn was a model for, despite her fame and ubiquity, our first glimpse of the lady herself is of the toes of her shoes protruding from beneath the sheet covering her corpse as it’s about to head off to the morgue. So Vicki Lynn was a model who has been murdered, and the story that plays out on the screen tells of the investigation into her demise and of the people most intimately involved in her rise and fall. Much of what transpires comes via a series of flashbacks courtesy of the interrogations of the main suspects at police headquarters. Most of the information, and therefore the impressions of the events and personalities, comes through the eyes of PR man Steve Christopher (Elliott Reid) and the victim’s sister Jill (Jeanne Crain). With the narrative nipping back and forth between past and present, all kinds of petty jealousies and rivalries are exposed. All the while, moving in and out of the shadows that surround the death of Vicki is the menacing yet awkward figure of lead detective Lt Ed Cornell (Richard Boone).

Established wisdom tends to hold that remakes pale in comparison with the works they seek to reimagine. My own experience, however, tells me that is not always the case, although there’s no getting away from the fact all of that is highly subjective. Still, I doubt one would find many viewers who would claim Vicki adds to, much less improves on, the version filmed a dozen years before. Both films derive from Steve Fisher’s novel and Dwight Taylor’s script with very little divergence on show. Harry Horner was an occasional director and Vicki is something of a workmanlike effort, with the odd instance of flair set off by Milton Krasner’s photography. In the main, it rarely grabs the attention and too many scenes exhibit a flatness that is vaguely disappointing.

That same year Jean Peters did good work in Niagara for Henry Hathaway and was even more impressive for Sam Fuller in Pickup on South Street. Admittedly, her role in this movie is limited to some extent but I thought her performance was just serviceable. I mean she comes across as attractive but I don’t get the sense of raw ambition that ought to underpin the character. Jeanne Crain fares better in the bigger and more grounded part as the surviving sister, although it’s not an especially complex role. This brings me to Richard Boone and Elliott Reid, and it’s hard not to have Laird Cregar and Victor Mature in mind while watching them work. Boone brings a different quality to his portrayal of Cornell, adopting a more buttoned up and physically restricted aura than was the case with Cregar. He spends much of his time with his head tilted ever so slightly down and the arms and elbows drawn in, like a man forever on the defensive, forever reining in dangerous impulses.  It’s an interesting approach and a valid one too in a part which demands a significant amount of pathos.

Elliott Reid, on the other hand, represents a major weakness at the heart of it all. Frankly, I do not see him as a leading man. In fact, I think the only other movie where I’ve seen him take the lead is The Whip Hand, a risible effort which his presence did little to improve. Reid’s forte was in supporting roles, particularly those which required a degree of smugness – he was fine in Woman’s World for Jean Negulesco and even better as the unctuous assistant prosecutor in Stanley Kramer’s Inherit the Wind. Support in this film comes via the ever excellent John Dehner, Casey Adams and a marvelously creepy Aaron Spelling.

Vicki came out on DVD years ago from Fox as an entry in their film noir line. Those titles tended to be handsome looking presentations and the transfer still holds up well with not very much in the way of damage, to my eye at least. It is not as strong a film as I Wake Up Screaming but it does have points in its favor – for one thing, Boone’s reinterpretation of the role of Cornell is never less than fascinating, as one would expect of that actor. I have to say I’m pleased that this movie is and has been accessible, even if it may never become a favorite. It’s worth checking out if you should come across it, just so long as you don’t pitch your hopes too high.