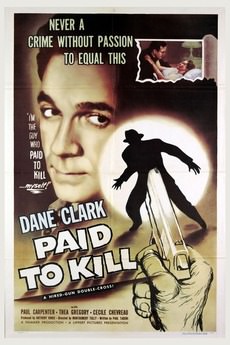 Previously I made the assertion that instances of bad luck and, let’s say, poor choices when it comes to decision-making were major ingredients of film noir. I suppose rash decisions can and often do count as poor, so this fatal combination makes another appearance in Paid to Kill (1954), an early Hammer production which followed the formula adhered to by the studio back then of using a slightly faded US star in the lead to add greater marketing appeal outside of the UK.

Jim Nevill (Dane Clark) is a businessman and the head of Amalgamated Industries – I’m not sure if the exact nature of the industries is ever mentioned and if it is, I’ve no memory of it. Anyway, the point is that, despite surface indications, Nevill and his company is in trouble. A deal he had been depending on seems to have fallen through and he’s faced with the prospect of professional and personal ruin. This is an unattractive prospect but it’s made even more unpalatable by the fact that Nevill is desperate to ensure his wife, Andrea (Thea Gregory), is not dragged down with him. This is where we come to the rash decision referred to above – he hires (blackmails actually) an old acquaintance with a shady past to kill him so his wife will benefit from a generous insurance payout. Quite aside from the matter of pushing nobility and altruism to the extreme, Nevill has miscalculated badly. What happens when a man who convinced himself he had nothing to live for then discovers that the opposite is the case after those grinding wheels of fate have been set in relentless motion? What do you do when the man you’ve paid to take your life looks like he’s not only determined to fulfill his side of the bargain but has also dropped completely out of sight? 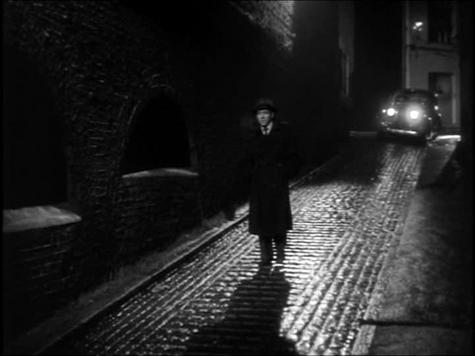 The Hammer name is best known for the horror movies the studio specialized in from the last 1950s onward but the studio was making a lot of these modest little crime movies in the earlier part of the decade. When it came to marketing them for DVD release some years ago they were labeled as noir, although that didn’t really fit in all cases. Having said that, Paid to Kill does live up to the billing and the whole premise of the movie, along with the tone and look, is pure noir. The focus of this site has remained firmly on British crime of late and certain directors have almost inevitably been featured. Montgomery Tully hasn’t been included until now but his output during the 50s and 60s was such that it would be difficult to run through any short series of articles on this theme without coming to him eventually. His work on Paid to Kill is quietly impressive, maintaining a good pace and an attractively dark look.

Overall, I like this film – the story is melodramatic but in a good way, and the direction has a smooth efficiency – but it would be remiss of me if I were to gloss over the deficiencies. To begin with the positive, I feel Dane Clark did well as the lead, hunted and subdued for the most part but also bouncy and pugnacious when the twists of the plot required it. While he’s not an actor I’ve ever warmed to in particular, I’m happy to acknowledge how important he is to the production here. Yet that’s about it as far as the praise for the acting goes. With the notable and laudable exception of Clark, we’re treated to a succession of overly broad, flat or, in a few cases, outright wooden performances. Disappointing.

Paid to Kill was released on DVD by VCI, paired up on the same disc with another Montgomery Tully effort The Glass Tomb. There’s some print damage to be seen throughout and it’s clear that no restoration was attempted. Still, the image isn’t displeasing and that damage isn’t too distracting. OK, I’ve been quite dismissive of many of the performances but Clark is fine and his work, alongside Tully’s direction and the fatalistic plot, more or less compensates. It’s a neat and compact British noir and a good example of early Hammer.