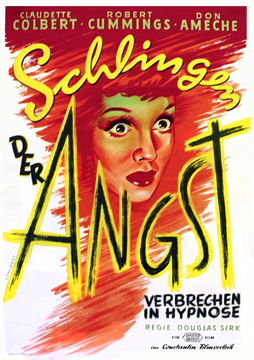 There are a couple of options open should you come across anyone who tries to sell you the idea that the impact movies have on culture is negligible. You could think to yourself that this person is mistaken or misguided, and leave it at that. Alternatively, you can attempt to set them straight. Now language and culture are inseparable, their relationship being essentially symbiotic. So, when the movies give us words that become part of everyday language, that ought to bolster the idea of cinema’s cultural significance. Every classic movie fan, and film noir aficionados in particular, will be aware of Gaslight. The story, derived originally from a play, was filmed twice  and the concept underpinning it has become a staple of countless psychological thrillers. In a broader cultural sense, the term gaslighting has entered the language and refers to manipulating others to the point where they start to question to their own judgement, perception and ultimately their sanity. All of which brings me to Sleep, My Love (1948), an undeniably stylish entry in this sub-genre.

Alison Courtland (Claudette Colbert) is a wealthy woman from an elegant, patrician background. She’s not the type of person one would normally think of as likely to awaken in the dead of night aboard a train speeding towards an unknown destination. Nevertheless, that’s the first view we get of her, panicked, frantic and screaming blue murder in confusion. Her husband (Don Ameche), concerned to find her missing and nursing an apparent gunshot wound to his arm, has called in the police. It seems that this isn’t the first time the lady in question has disappeared but no harm has been done and she’s soon on a flight back home to New York. On the way she makes the acquaintance of another well-to-do type, Bruce Elcott (Robert Cummings) who is just home from China. I don’t believe I’m revealing too much here if I get right to the point and say that Alison is being maneuvered into an increasingly vulnerable position by her smooth but calculating husband. This becomes clear quite early on, and I feel  it constitutes maybe the biggest weakness of the picture. To my mind, the writing gives away too much too soon. It’s not merely a question of the viewer being deprived of surprises, but rather the fact that this “lay it all before you” approach robs the movie of much of its suspense and accompanying tension. While these are not the only elements in movies of this type, they are important and effectively negating them at an early stage means that viewers are left with little more than a sense of curiosity over how the hero will eventually triumph. 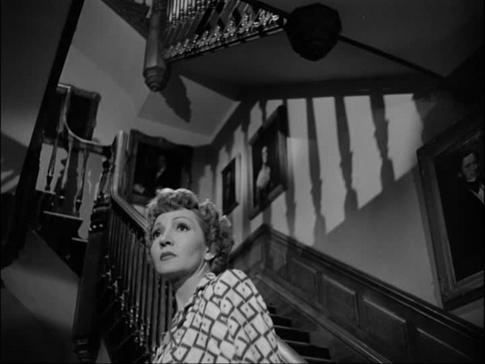 That’s not to say there is no tension or suspense in the movie; individual sequences such as the drug-induced suicide attempt are very well executed. This is where the skill of the director comes into play. Douglas Sirk, along with cinematographer Joseph Valentine, draws full value from the interior of the Courtland home, the staircase featuring prominently. As seen above, it’s essentially pinning Claudette Colbert in place with the shadows cast by the balustrade creating bars to imprison her in her own home, the weight of her own noble heritage bearing down on her and precluding, as though it were an affront to good taste, any consideration that her husband might be plotting against her. This noir imagery is sprinkled throughout the movie, Venetian blinds often replacing the vertical lines with horizontal ones but the impression of individuals trapped by circumstance remains.

The visuals, as one might expect, are among the greatest strengths of the picture. Sirk’s films are always good to look at, and of course mise en scene  is a term often used whenever his name comes up; he goes in for a lot of sharply tilted angles here, from those vulnerable shots from below to the more remote ones gazing down with a cynical detachment. These altered perspectives are very much to the fore in the studio of Vernay (George Coulouris). Overlooking the sidewalk and street,  here the crooked photographer makes his plans for his partnership with Courtland and his model Daphne (Hazel Brooks) perches higher still on her pedestal and mulls an entirely different partnership. This is all nicely set up to highlight her disdainful superiority, and she quite literally spends the whole movie looking down on everyone. 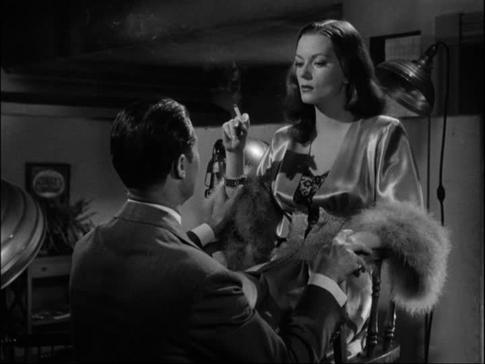 Claudette Colbert got top billing and she was still a major star at the time. It’s her show really, and she is fine as the increasingly rattled woman who can’t seem to convince anyone she’s not hallucinating. There’s a little sequence around the halfway point where she attends a wedding of a Chinese couple in the company of Cummings and she comes across well here – unaffected and openly appreciative of the opportunity to mingle among a different crowd to her usual acquaintances. It’s beautifully played as she rambles on about how different we all are and her simple take on what makes some people happy and others unhappy, a common feature of Sirk’s films. She gets across the sweetness of her character naturally and even her slight tipsiness by the end of the evening is quite credible – I’ve lost count of the number of actors who overcook it when asked to portray drunkenness on screen.

Robert Cummings is an actor who divides opinion and I’ve heard more than a few people say they find him a poor lead in general. However, I’ve never had any issues with him – I liked him in his movies for Hitchcock (Saboteur & Dial M for Murder) and I think Anthony Mann coaxed a solid performance from him in The Black Book. Frankly, I think his charm is a neat contrast to the polished insincerity and moral weakness of Ameche. Hazel Brooks is a striking presence – physically stunning, sexy and insolent, she is visibly contemptuous or everybody and everything around her. Yet her performance has an odd feel to it, her delivery of her lines sounding stiff and forced to me. Coulouris is an engaging villain, a strange combination of suave and clumsy, menacing and simultaneously the butt of Brooks’ barbs. In minor roles Keye Luke is entertaining as Cummings’ pal and Raymond Burr is welcome but underused as a skeptical detective.

Olive Films in the US released a very attractive edition of Sleep, My Love some years ago on both Blu-ray and DVD. The movie looks clean and sharp and Sirk’s visual style is highlighted most effectively. The script, on the other hand, is just OK. The gaslighting theme will be a familiar one to many viewers and I would have preferred it if a little more ambiguity had been injected, or at least a little more information had been held back, in order to build some added suspense. As it stands,  the audience is forever a step or two ahead of the characters, which I’m not convinced is the best approach to take. On the whole, however, I have a positive feeling about the movie. It’s not perhaps full-on Sirk but there is  plenty of greed and thwarted desire, with characters living out lives that barely hint at the reality simmering below the surface. This alongside the visuals and a handful of attractive performances are enough to overcome other deficiencies in the script for this viewer.