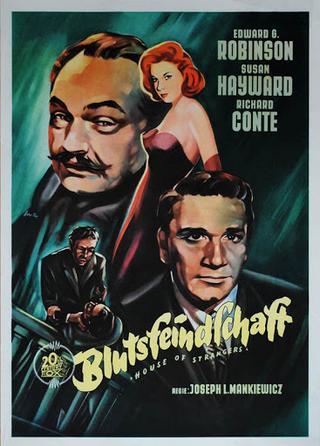 Back in 2015 I looked at Broken Lance, a superior western and a remake of an earlier movie. I remarked at the time that I preferred the later version of the story and that’s still the case. Nevertheless, House of Strangers (1949), the original adaptation of Jerome Weidman’s novel, is an excellent piece of work when viewed in its own right. All versions and adaptations of stories bring something different to the table: the sensibilities of the filmmakers involved, themes added or removed, highlighted or suppressed. Where Broken Lance broadened and extended the scope of the material, House of Strangers retains a tighter focus overall.

A crowded sidewalk, bustling and bursting with life, and amid it all the eye is drawn to one solitary figure making his way through the vibrant mass, a detached and determined figure. He pauses before the imposing facade of a bank, the guard inside eyeing him fishily through the polished plate glass. This is Max Monetti (Richard Conte), once a sharp and arrogant lawyer but now just another ex-con. Actually, he’s a bit more than that; the bank was once the domain of his late father Gino Monetti (Edward G Robinson) before it was taken over by three of his sons, and before Max spent seven years as a guest of the state for jury tampering. Some of the brashness is still there though, and it’s enough to worry his siblings. It’s here that the lengthy flashback which occupies most the running time kicks in, showing how a family turned upon itself and slowly disintegrated, how rivalry and dissatisfaction became the seeds of hatred, how an old woman’s heart was broken and how a once grand home was transformed into a mausoleum to pernicious pride. 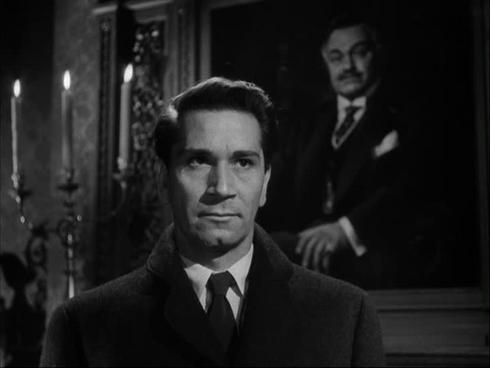 As in the image above, the past is forever peering over the shoulders of the characters. And it’s not just the malign spirit of Gino Monetti haunting his sons and poisoning their hearts, for even the old man in life was haunted by the specter of penury and subservience. The whole movie concerns itself with characters racing to keep a step ahead of their past, be it the stifling “old world” traditions that Gino professes to be desperate to throw off while apparently reveling in their trappings or another generation’s desire to be free of the too firm hold of an overcritical patriarch. Underpinning all of this is the concept of revenge or retribution, and the corrosive effect it has for all who drink from that particular cup.

I opened by speaking of a narrower focus, and I feel House of Strangers actively seeks to present a sense of restrictiveness. Instead of showing family as a symbol of fertility, it offers up a view of a stagnant and suffocating household, and I think it’s no coincidence that much of the action is rooted in the Monetti house and the old bank. Both structures have an old-fashioned ambience, a workplace where the sons are kept firmly in place – literally caged in the case of the elder brother Joe (Luther Adler) – and with limited options, and a home that is almost overpowering in the sheer weight and oppressiveness of its decor. The contrast with the light, spacious and airy apartment of Irene Bennett (Susan Hayward), the one person in the movie with an outward-looking perspective, and the one who represents the chance for a clean break with the past and new start on the west coast, is marked and unmistakable. 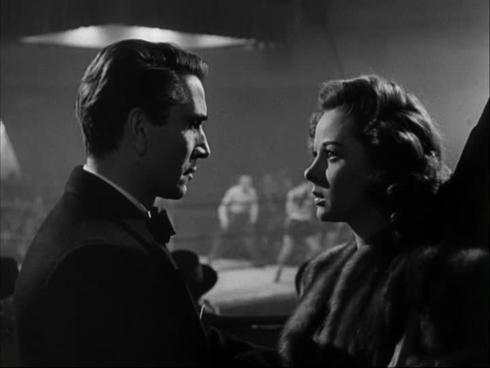 Susan Hayward’s presence adds much to this movie. Her drive, allure, and most of all her infectious self-confidence represent the best hope of salvation for Richard Conte’s Max. The frank and witty dialogue those two trade is a highlight, giving an edge to their passion and, in Conte’s case, allowing his character to become much more rounded. Joseph L Mankiewicz, who apparently had an uncredited hand in the writing alongside Philip Yordan, was noted for the use of sophisticated dialogue and it’s a real boon in this picture. The visuals and themes are well handled and well realized, but the smartness of the script gives everything extra vigor.

Richard Conte could always be relied on when you needed someone tough and streetwise, and he starts out incredibly sure of himself, unpleasantly so in fact. It’s largely through his interaction with Hayward though that he unbends gradually, looking out instead of in, realizing what to embrace and what to reject. Edward G Robinson plays a man it’s hard to like – even in his more expansive and beneficent moods there’s a shade of self-importance about him. As the story progresses, this latter quality develops, eventually running to bitterness and, ultimately, spite and vindictiveness. With a trio such as Robinson, Hayward and Conte headlining, there’s not a lot of space left for others to make their mark. That said, Luther Adler is subtly impressive, enduring the pettiness and humiliations as he broods and nurtures a deep resentment. In support Paul Valentine and Efrem Zimbalist Jr are the other two browbeaten offspring, while the imposing Hope Emerson seems an unlikely mother to the diminutive Debra Paget.

House of Strangers was released on DVD years ago as part of the Fox Film Noir line and the image is pleasing if not perfect, with a few trailers and a commentary track by Foster Hirsch as supplements. All told, this is the kind of highly polished picture one would expect from 20th Century Fox and Joseph L Mankiewicz. The shift to a western setting allowed Broken Lance to successfully explore other ideas and make it a more satisfying experience. However, I like to examine every movie on its own merits and I feel House of Strangers deserves to be praised for what it is rather than disparaged for what it isn’t.

Much as I enjoy all the gadgetry and technology that seems to have become part and parcel of the espionage film over the years it’s refreshing nevertheless to watch something where the spy uses nothing more advanced than a pocket camera to accomplish his goal. 5 Fingers (1952) is just such a film, a slow burning suspense yarn that concentrates on character and the gradual building of tension. The fact that it’s supposedly based on a true story makes the whole, seemingly unlikely, series of events even more intriguing.

The story takes place in Ankara, Turkey during WWII and tells the story of an amazing scam carried out under the noses of the British embassy staff. Diello (James Mason) is an Albanian employed as a valet to the British ambassador, and is a man of intelligence, culture and ambition who realises the unique opportunity afforded him by his current employment. Not only is he the trusted companion of the senior diplomat, but he also has easy access to countless documents of the highest classification that routinely cross his master’s desk. To a patriotic man, or even a man of integrity, this might be regarded as a privilege but nothing more. However, Diello is neither; he is a pragmatist with two aims in life – a) to win the heart of the aristocratic widow of a former employer, and b) to have sufficient funds to emulate the life of a South American gentleman he once caught sight of in Rio. With this in mind, he approaches a German diplomat and makes an offer that’s hard to believe and even harder to turn down. He promises to ensure the delivery of a continual stream of top secret documents, but at his price and on his terms. He thus becomes a privately employed agent of the Nazis, under the code name Cicero, and the money starts to roll in. But, as I said, Diello is a very clever man, clever enough to know that he cannot keep popping around to the German embassy and hope to remain unnoticed. Needing both a partner and a safe meeting place, he strikes a bargain with an impoverished Polish countess (Danielle Darrieux) for whom he’s been carrying a torch. In return for funding her lifestyle Diello gets to use her home as a cover for meeting and carrying out transactions with a variety of high ranking Nazis. Of course such a scheme can’t last indefinitely and Diello eventually finds out that betrayal can be a double-edged sword.

5 Fingers came out a mere seven years after the end of WWII and when you bear that fact in mind it’s quite surprising that the character of Diello is one the viewer actively roots for. Although it’s made clear that Diello is spying out of a desire for money and cares nothing for political ideology, the truth is that it’s Mason who makes the character such an appealing one. Both the British and German authorities are treated with a kind of suave condescension by the man. He always appears the master of his own destiny and, even with the earth falling away beneath him, you never really doubt that he’s the one in control of the situation. I never tire of watching James Mason, and there’s real pleasure to be found here in seeing him toss out casual insults to the Nazis in a marvellously supercilious tone. Danielle Darrieux is an actress I haven’t seen much of, but her fallen Polish aristocrat is a fine mix of allure, earthy sensuality and duplicity. Her scenes with Mason carry a sense of conviction and there’s certainly some chemistry between them. Michael Rennie has a somewhat thankless role as the secret service man hunting Cicero but he does well enough in the circumstances. Joseph L Mankiewicz wasn’t the most prolific director but I’ve always enjoyed his work and he handles this material very stylishly. The use of genuine Turkish exteriors helps lend some authenticity to the film but it’s the interior sequences that have the most power. The scene that leads up to the discovery of Cicero’s identity is a masterclass in the building of suspense – the way the camera follows a cleaner round an embassy corridor, while she tries to work out the source of a power failure and we know what the consequences of her actions will be, is a piece of film-making worthy of Hitchcock himself. And that neatly allows me to point out that the movie also benefits from a score by the great Bernard Herrmann.

5 Fingers is available on DVD in R2 from Optimum in the UK. Unfortunately, it’s one of their weaker efforts with a soft transfer that also suffers from being interlaced. It’s one of the usual barebones discs from this company with no extras whatsoever and no subtitle options. However, the one thing in its favour is that it’s cheap and it’s about the only option if you want to see this title – being a Fox property the chances of a R1 release are not good at present. Anyway, it’s a very classy film that won’t disappoint, and the final scene that fades out to the accompaniment of the kind of hollow, cynical laughter that recalls John Huston is almost worth the price on its own. The Optimum disc is definitely watchable despite its shortcomings and, since the movie itself is just so entertaining, I’d have no hesitation in recommending it.