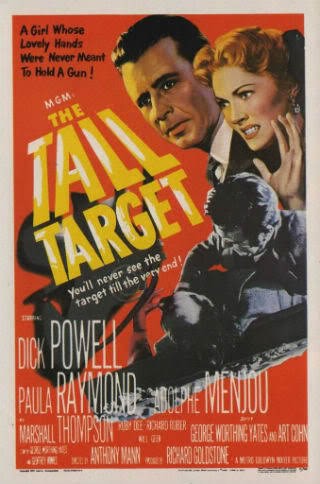 I’ve mentioned before that I’m a big fan of thrillers taking place in isolated or self-contained settings such as old dark houses, ships or trains. The restrictions necessarily imposed are a marvellously effective way of maintaining focus, both for the filmmakers and the viewers. It also makes for effortless suspense as the options open to the characters involved are narrowed down, and a tense, claustrophobic atmosphere is easily achieved. The bulk of the action in The Tall Target (1951) takes place on a train, and the movie uses this cramped stage to enact its dramatic events to great advantage. What makes the film all the more impressive in my view is the fact that there’s not much of a mystery to solve. Nevertheless, what unfolds on the screen holds the attention from beginning to end.

The story is one inspired by a real event – a plot to assassinate Lincoln before his inauguration coud take place. It’s 1861 and the president-elect is due to make a short stop in Baltimore, Maryland before heading on to Washington to take power. Naturally, these are troubled times and talk of secession and war is on everyone’s lips. With Lincoln’s elevation to the highest office in the land it’s only a matter of time before the South declares independence, and war has to be the next logical step. As such, there are those with a vested interest in seeing that the man never gets to Washington. John Kennedy (Dick Powell) is a detective who feels sure he’s stumbled onto a plot to assassinate Lincoln as soon as he sets foot in Baltimore. The problem is no-one wants to believe him, and his chief even goes so far as to threaten him with dismissal if he insists on pursuing the matter. Unfazed by this stonewalling, Kennedy turns in his badge and hotfoots it to the station. His intention: to board the Baltimore train, foil the conspiracy and discover the identity of the ringleaders. However, he immediately hits a snag; his contact, along with his ticket, has disappeared and someone else is claiming to be the real John Kennedy. A quick inspection reveals that the detective’s friend has been murdered, but there’s no way he can prove this. Such an inauspicious start would give most men pause for thought, but Kennedy is nothing if not resourceful and he turns to an acquaintance to back him up. Colonel Jeffers (Adolphe Menjou) is the one man aboard the train who can identify Kennedy and vouch for his credentials. So the soldier and the policeman form an uneasy alliance – Jeffers is no lover of Lincoln’s politics – in the hope of flushing out the would-be killers. The list of suspects is a relatively short one: Jeffers himself, a blowhard industrialist (Will Wright), a young brother and sister apparently travelling on to Georgia (Marshall Thompson & Paula Raymond). Although the villain’s identity is revealed around the halfway mark, I’m not going to spoil things for any people who have yet to see the movie. Anyway, that’s not the point of the film. The greatest anxiety is generated by the doubts over whether Kennedy can prevent the assassination from taking place. Now anyone with even the most rudimentary knowledge of American history knows the answer to that one, but where the script really triumphs is in its ability to leave you hanging on the edge of your seat in spite of this. 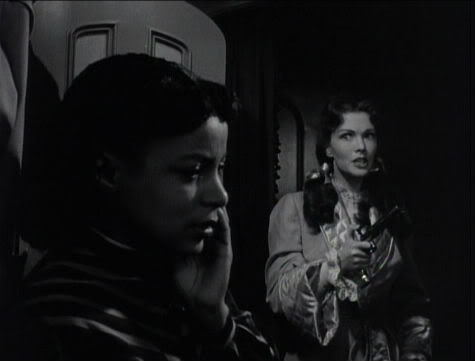 Although Anthony Mann had already embarked on his western phase by this time, The Tall Target harks back to the tight little noir thrillers with which he had made his name throughout the preceding decade. Instead of the wide open spaces of the frontier where the drama was played out against a harsh landscape, this film is a closed affair that was shot on sound stages. The actors don’t have a lot of room to move around freely, and that’s entirely fitting for a story where the characters’ capacity for manoeuvre in any sense is severely limited. There are also a lot of typically disconcerting low-angle shots and close-ups of strained faces. Mann seemed to be blessed with good cameramen through most of his career, and Paul Vogel did some excellent work on this movie. Vogel had already shot a number of noir pictures – Lady in the Lake, High Wall, Dial 1119 – and brought that sensibility to The Tall Target. This couldn’t be termed a film noir yet it has the look and feel of one. What we get is primarily a suspense thriller, and it’s a combination of good writing and characterization, as well as atmospheric direction and photography, that ensures it remains gripping. When Kennedy finds himself facing the twin dilemma of being pursued by both the assassins and the suspicious authorities, Mann gets a lot of mileage from such a simple setup as the search for a berth to hide in. Time and again he draws the maximum degree of tension from situations that the viewer knows deep down are going to be resolved favourably. It’s no mean feat to deftly turn potentially trite circumstances into something that has you biting your nails – in fact, I’d say it’s one of the factors which sets the artist apart from the mere journeyman.

Compared to the kind of stuff he’d been doing before, Dick Powell took his career in a completely different direction when he was cast in the role of Marlowe in Murder, My Sweet in 1944. I like the way he worked on the tough guy persona in the following years and carved out a little niche for himself. The Tall Target was one of his last cinema roles before he turned his attention to directing and TV, and he handles the part just fine. Playing a professional detective meant he had to do a bit of a balancing act, conveying the increasing desperation of a lone cop in a race against time yet still keeping just the right side of panic. He got some excellent support from Adolphe Menjou as the newly commissioned colonel. He adds some of his trademark polish to his performance and has the kind of ambiguous quality that helps round out his character. Will Geer brought a lightness of touch to the part of the frustrated conductor, and it’s a welcome contribution amid all the severity. I was also impressed by the sensitivity that Ruby Dee displayed as the slave girl torn between loyalty to her owners and a natural sympathy for Powell’s cause. Paula Raymond and Marshall Thompson were less effective, the former having the misfortune of being handed pretty much a nothing role, while the latter just seemed wooden. To be honest, I’ve never been all that taken with Thompson in anything I’ve seen him in; he always appeared too stiff and repressed for my liking. The cast was filled out with a whole host of character actors who should be familiar faces, including Florence Bates, Will Wright and Percy Helton. 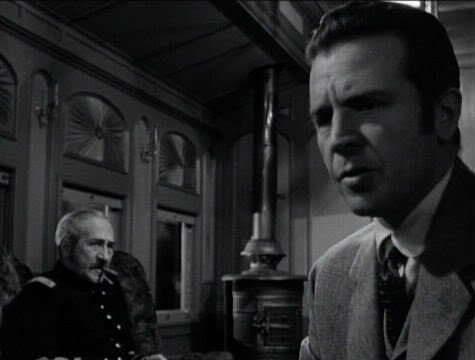 To the best of my knowledge, the only DVD of The Tall Target is the MOD disc available via the Warner Archives. The transfer on that disc isn’t bad; it doesn’t appear to have had any work done on it but it’s in reasonable condition. There are the usual cue blips and the like to be found on unrestored movies though the image is satisfactorily sharp. With MOD discs you generally don’t get any extra features, but this one has the trailer included. I’m a great admirer of Anthony Mann’s work and The Tall Target is a good, solid effort. It has to be said that it’s neither as famous nor as complex as his best films. The lack of complexity shouldn’t be taken as any criticism of Mann, that’s just the way the characters are written, but it may partly explain why it’s not better known. Anyway, it’s a finely crafted little thriller that moves at a good pace and offers plenty of entertainment value. I have no complaints.

12 thoughts on “The Tall Target” 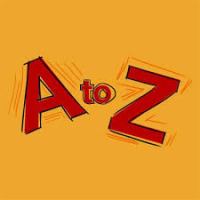 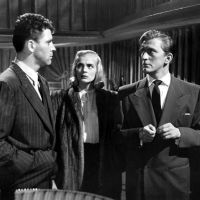 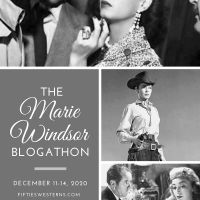 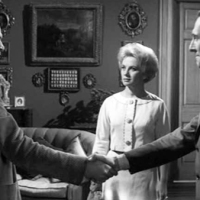 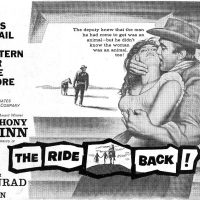 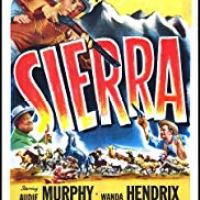