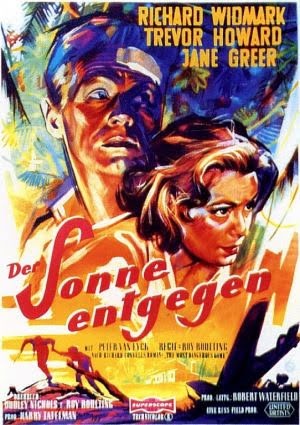 Remakes frequently attract bad press, coming under attack for a lack of originality or the simple fact that they are unnecessary. This is so often the case that there’s a temptation to discount a remake out of hand, expecting it to conform to type. Still, blanket dismissals are rarely a good idea and can lead to ignoring worthwhile movies. So what makes a remake worthwhile? Well for me anyway, it ought to offer something different; if not, what’s the point. This is particularly true when we talk about a movie that’s generally regarded as a classic to begin. Richard Connell’s story The Most Dangerous Game had already been filmed very successfully back in 1932 so Run for the Sun (1956) needed to bring something new to the table if it were to be regarded as a valid piece of work. Personally, I feel Roy Boulting’s version of the tale rises to this challenge and succeeds in its own right.

Mike Latimer (Richard Widmark) is a famous author, a Hemingway-style figure who lived the adventures in far-flung locations he wrote about, but he’s dropped out of sight. When such people take it upon themselves to disappear there’s inevitably a desire to find out why. And so Katie Connors (Jane Greer), a magazine journalist specializing in celebrity profiles, heads to Mexico to see if she can track down the mysterious writer and get a line on what drove him to vanish. Well she finds him living a simple life, drinking, fishing and avoiding his typewriter at all costs. The first half of the movie concerns itself with Katie’s efforts to surreptitiously dig deeper, while Latimer finds himself gradually falling for her. Katie’s job involves a degree of dishonesty – Latimer is unaware she’s going to do a write-up on him – which doesn’t sit easily with her, and so she eventually loses all appetite for it. She takes the decision, abruptly, to leave, to head to Mexico City and let Latimer work out his personal issues in peace. And here’s where the film begins to get back to Connell’s premise. As Latimer and Katie set off in his light plane a piece of carelessness leads them unwittingly off course, way off course and running low on fuel over dense jungle. When they spot an isolated clearing, the one place they may be able to make an emergency landing, it looks like fortune is smiling on them. However, the aftermath plunges them into greater danger. The wrecked plane is discovered by Browne (Trevor Howard), an Englishman who has made his home far away from civilization. Browne claims that he and his associate Dr Van Anders (Peter van Eyck) are involved in archaeological research, but Latimer is suspicious: little details don’t quite add up and then there’s the pack of dobermans that roam the grounds, supposedly to keep the Indian laborers from running off and deserting. The fact is Browne and Van Anders are in this remote setting for an altogether more sinister reason, and they can’t afford to have their unexpected guests betray their presence.

The western is perhaps the most prominent example of a genre using landscape and locations as a character. The adventure picture must run it a close second though, and it’s especially noticeable when we look at the sub-genre of survival thrillers. Run for the Sun is heavily dependent on its Mexican locations throughout, highlighting the charming exoticism in the first act before venturing deeper into the wilderness later as events take a more dangerous turn. Roy Boulting really makes the most of the treacherous terrain Widmark and Greer must laboriously traverse and captures the grueling nature of a trek across broken ground and cloying swamps. Joseph LaShelle’s camera drinks in the primal beauty of the jungle and all its attendant perils. The latter half of the film is easily the strongest, helped not only by the locations but also drawing on the director’s skill at building tension and orchestrating the action sequences. Boulting also worked on the script, along with Dudley Nichols, and I like the way it alters or adds to Connell’s story while remaining respectful of the source. The updating to a post-war setting works well and is fairly credible – the reasoning behind the central hunt becomes arguably more rational, even if it does mean sacrificing some of the creepiness that characterized the 1932 version. Ultimately, the theme of man hunting man, and the portrayal of the wilderness as both friend and foe is still intact. 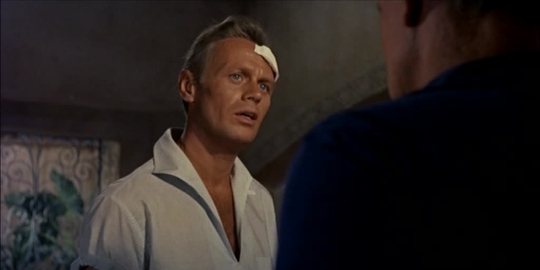 Run for the Sun came in the middle of a great sequence of films for Richard Widmark. He’d graduated from the villainous early roles and was very comfortable as a heroic lead. Even so, the edge that meant he was such a good bad guy was still there and it added something interesting to his heroes. Widmark had a prickly, querulous side that was never far below the surface and it gave another dimension to his characterizations, ensuring there was never any blandness on show. Jane Greer’s place in cinema history was guaranteed when she took on the part of one the greatest ever femme fatales in Tourneur’s Out of the Past. In truth, nothing else she did really came close to that iconic character. Nevertheless, I’ve always found her a welcome presence in any movie or TV show where she appeared. Run for the Sun gave her the opportunity to indulge in a bit of duplicity, although it’s of the mild variety, and she got the sense of internal conflict across quite successfully. Additionally, she coped well with the physical stuff that the long jungle pursuit required. The casting of Trevor Howard as the exiled Englishman was a fine choice. Howard had a quality of bruised refinement about him which was ideal for the part of a man forced by his own ambition and poor judgement to live a life far removed from what his upbringing had promised. Peter van Eyck too was excellent at playing the cool, calculating type, one whose outward polish masks a ruthless streak.

Run for the Sun is available in the US as a MOD DVD from MGM, and in the UK as a pressed disc from Optimum/Studio Canal. I’ve had the UK release for some years now (I think from reading around that the US MOD is an identical transfer) and it looks very good. The print states the film was shot in SuperScope 235 but the DVD presents the movie 2.00:1 – I don’t know how accurate that is but the compositions look fine and certainly don’t appear compromised by any cropping. The image is clean and sharp with good color reproduction. The disc is a very basic affair which offers no extra features whatsoever. The film itself is a neat and clever updating of the 1932 original, changing the locations and the motivations of the characters but maintaining the central thrust of the theme. It’s a good, solid adventure movie with strong performances from the four principals, and some stunning location photography. If I have any major criticism, it’s that the first half takes longer than it needs to set up the story. Having said that, the latter half picks up the pace impressively and more than compensates for any earlier slackness. It’s a film I enjoy revisiting periodically and I recommend checking it out.