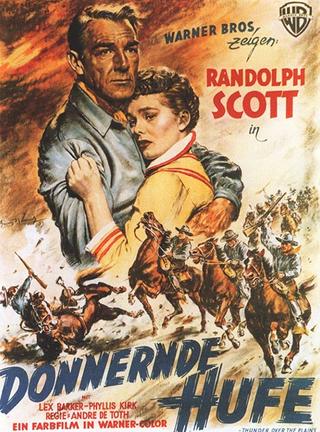 I can never quite make my mind up on voiceover narration in the movies; after all, it does create what might be termed an authoritative mood that feels somehow fitting for certain pictures such as documentary-style films noir. On the other hand, it can give the impression of lazy writing, an info dump of sorts that resorts to telling rather than showing, or what’s worse is that it can signal the arrival of historical/political lecturing or finger-wagging. Thunder Over the Plains (1953) opens like this, offering up a potted post-Civil War synopsis that had me fearing the worst. Fortunately though, it panned out differently, the narration serving to contextualize the story before letting the drama at its heart grab the reins and move center stage.

The background is Texas in the years following the Civil War – Reconstruction and carpetbaggers loom large, and with them come all the frustration, resentment and anarchy one might expect in the aftermath of conflict. The main thrust of the story concerns the attacks on the despised carpetbaggers and the role of the army in trying to establish and maintain an uneasy semblance of order. That thankless task has fallen to native Texan Captain Porter (Randolph Scott), and while the burden of duty weighs heavily on him, there’s no doubting his professional ethics. Porter’s main antagonist is Ben Westman (Charles McGraw), a Robin Hood figure among the local population, an especially troublesome thorn in the side of the grasping tax agents, and something as elusive as a shadow in the early morning mist for the hard-pressed military. Porter, and indeed his whole command, is trapped in the middle, regarded with a sneering contempt by the locals while having his hands effectively tied by remote figures in Washington. And so the tit for tat sniping continues, with the warring factions fencing more or less  harmlessly until a would-be informer turns up dead. It’s at this point that the situation creeps relentlessly towards another level of volatility, and Porter also faces the added hassle of a dealing with a newly arrived officer (Lex Barker) who not only lacks professional judgement but has set his sights on wooing his superior’s wife. 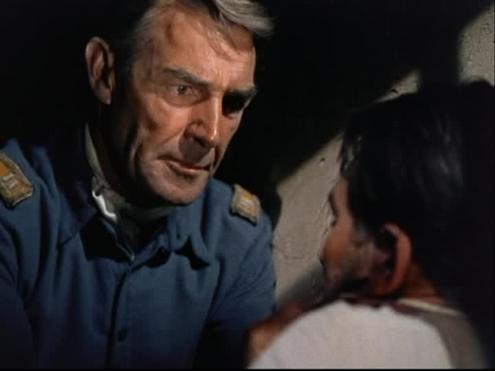 It’s never less than a pleasure to come back to the films of Andre de Toth, and although the movies he made with Randolph Scott aren’t held in the same regard as those the star worked on with Budd Boetticher I still feel there’s much to admire and enjoy. With a deep and talented cast, a highly accomplished cinematographer (and frequent John Ford collaborator) in Bert Glennon, and a story overflowing with internal conflict, the director would have found it difficult to go wrong. De Toth  handles the action scenes with gusto, and there’s a lovely little bit of business with McGraw and Scott stalking each other in the aftermath o a well staged ambush. And throughout it all there are some clever close-ups and interesting angles calculated to heighten the tension.

I’ve just spoken of internal conflict, and Randolph Scott (especially as he aged) seemed to grow increasingly confident exploring the dramatic potential of this. Stoicism was one of his greatest on screen traits and this was always employed most effectively when the challenge he faced had its roots within himself. He’s very successful at getting across the sense of a man who is well aware of what his responsibilities are and to whom he owes his professional allegiance, but at the same time is none too fond of the guy looking back at him from the mirror. For all that, the viewer never has any serious doubts concerning his doing the right thing when the chips are down. While Scott is working on the self-appraisal, Charles McGraw is enjoying himself tantalizing the audience with the kind of ambiguity his gruff roguishness was ideal for. Scott generally did some of his more interesting work when facing off against a charismatic and appealing foe – think Lee Marvin, Richard Boone or Claude Akins – and McGraw has something of that quality about him. 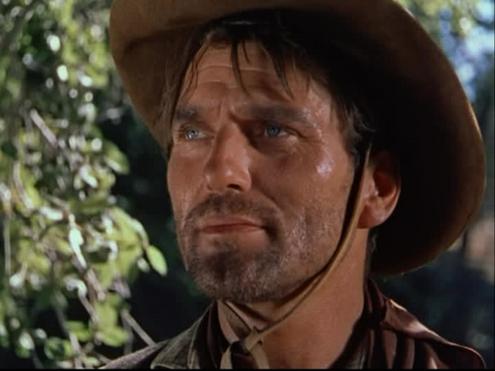 If I have a criticism of this movie it lies with the part played by Lex Barker. It’s  not that I have any issue with Barker’s handling of his role – if anything, I’d say he does a pretty good job with a largely unsympathetic part – but my beef is with the way it’s written. With a plot that sees Scott at war with himself as his home state descends into chaos, I feel there was no need to add in an extra layer of conflict in a movie running a shade under an hour and a half. Barker had just come off the Tarzan movies and I get the feeling (this is just a hunch, mind, without any hard evidence to back it up) his part was expanded artificially here. Using his character as a spanner in the military works makes some sense, but the supposed rivalry for the affections of Phyllis Kirk adds nothing of substance to the story and ends up feeling like a lame and half-hearted afterthought. Still, even if that’s a weakness in the picture, there’s plenty of enjoyment to be had from watching the likes of Henry Hull and Elisha Cook Jr, alongside familiar faces such as Lane Chandler and Hugh Sanders, doing their stuff.

Nowadays, there aren’t too many Randolph Scott westerns that can’t be tracked down and enjoyed. Thunder Over the Plains popped up on DVD in the US some years ago via Warner Brothers on a triple feature set, sharing disc space with Riding Shotgun. Bearing in mind the fact it’s squeezed on alongside another movie, it doesn’t look too bad at all. Naturally, the presentation is basic and there’s nothing in the way of supplements, which I think is a pity. Sure these films that Scott and de Toth made together don’t have the kind of reputation that the Ranown movies enjoy, and I’ll freely admit they are a notch below them in quality, but I can’t help feeling they deserve a little more critical attention. Recent years have seen a number of reappraisals and fresh evaluations of the artistic and cultural legacies of a range of filmmakers. Perhaps it’s now time for a new look at these movies?