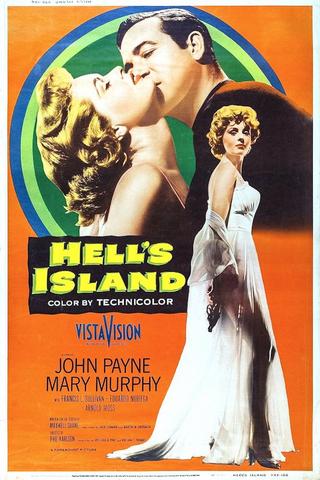 Yes, I know – there are those who will argue, quite vociferously too, that there’s no such beast as a color noir. I’ve heard these arguments before, seen them made with passion and insight. However, while I fully respect the view I cannot buy into it. OK, ultimately, none of this matters a jot but it’s the kind of stuff we film fans do like to chew the fat over. Anyway, I’m of the opinion that Hell’s Island (1955) ought to be categorized as film noir as it has enough of the core ingredients to qualify.

Somewhat unusually, the opening credits play over what turns out to be the climax of the movie. From there we move to a hospital, where the protagonist has been undergoing surgery for a bullet wound. Still lying on the table as the doctor patches him up, Mike Cormack (John Payne) recounts his tale to the local policeman. Now I might as well make it clear that some may find the whole affair more than a little contrived. There’s no denying this, and I think that you have to embrace this aspect if you plan on enjoying the ride. So, here we are in the operating theater, with the hero chain-smoking (with the doctor’s consent) and narrating the peculiar set of circumstances that brought him to that point in just over a week. He’d been working as a kind of bouncer in a Las Vegas casino when he’s handed a proposition – for $5000 he’s to travel to a Caribbean island and inquire into the whereabouts of a valuable ruby that the owner wants back. Why him? That’s simple: the wife of the last man in possession of the gem is an old flame of Cormack’s and he’s therefore seen as having a ready-made foothold. To me, this and what follows is all characteristic of pulp noir – the impossibly convoluted tangle of relationships overshadowing everything before we even start, a clipped and world-weary voiceover from the lead, a location where the opportunities for corruption seem ideal, a femme fatale (Mary Murphy) who looks and acts like she’s been hoodwinking suckers all her life and, of course, a tough guy lead everyone appears intent on crossing up. 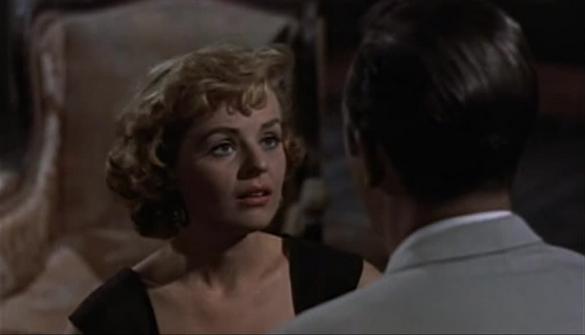 This was the third feature director Karlson and star Payne made together (following on from 99 River Street and Kansas City Confidential) and it has to be said it’s the least of the three. That doesn’t mean it’s a bad movie; if anything, acknowledging that this is a lesser affair is a testament to the high quality of the previous two collaborations. It’s enjoyable and pacy, with moments of toughness to hold the attention. Furthermore, it’s photographed by Lionel Lindon so there’s a polished and stylish look to it all. Yet, as I mentioned above, it’s also unashamedly pulpy, and there’s never any serious attempt to sell the story as anything else. We get the shady, overweight underworld type in a motorized wheelchair (Francis L Sullivan), the femme fatale’s  effete associate (Arnold Moss) , and then there’s the protagonist who’s pursuing the novel career path of lawyer-drunk-bouncer-patsy. When I say that all of these are blended together in a budget-conscious, set bound (mind you, it is an attractive set) Pine-Thomas production, then it ought to give a sense of the kind of movie we have. Basically, it’s a caper with some hard edges, as well as being a good-looking showcase for its stars. 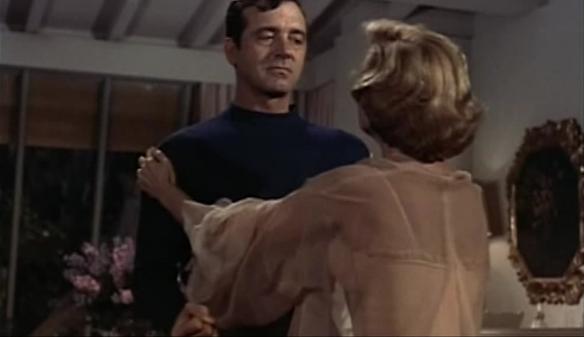 By this stage, John Payne had settled comfortably into these types of roles. He was capable of slugging it out convincingly with the best of them, and was credible whether on the receiving end of a casually brutal beating or booting a musclebound henchman into a pool full of hungry alligators. The scenes where he and Mary Murphy are trading kisses and threats are nicely done, but they too have that artificial, semi-cartoonish quality as though ripped from the cover of a 50s paperback; the whole thing winks at you in a stylish, sexy way but in your heart you know it’s superficial. A lot of the sexiness stems from Mary Murphy, giving an arch performance that’s fun to watch but you never really get the impression that she was stretching herself. And the thing is she was a good actress – having made a strong impression in The Wild One, she enjoyed a fair run in the 1950s. Around the time of this movie she was in two, in my opinion anyway, superior productions, Ray Milland’s fine western A Man Alone and Wyler’s The Desperate Hours alongside Bogart and March. The following year she would go on to play opposite Richard Basehart in Joseph Losey’s underrated and neglected The Intimate Stranger/Finger of Guilt – you can find reviews of that one by Sergio here and by Vienna here.  Moving further down the cast list, a slippery Arnold Moss is good value as expected. Frankly, I like a good heavyweight villain and so I feel it’s a pity Francis L Sullivan (in what I think may have been his last role role before his untimely death) doesn’t get more screen time.

Hell’s Island is one of those films that remains stubbornly difficult to acquire in decent quality. I picked up a German DVD (I believe there are also Spanish and Italian variants on the market but I have no idea how they fare in comparison) which is just barely OK. The movie is offered in a choice of presentations – a 4:3 one that seems to be a letterboxed non-anamorphic image, and a 16:9 one that I guess is blown up from the other?  Basically, it’s watchable but the image is muddy and colors are muted and dull. What’s needed is a full restoration – whether or not that’s likely is anybody’s guess. All in all, Hell’s Island is what I think of as enjoyable pulp noir – there’s as much, or more, caricature as characterization, and you’re never quite convinced that these people exist. Yet the direction and the actors keep you watching and at no time does it commit the cardinal sin of being dull or uninteresting. So, while it might not be essential you should still have a good time with it.

Incidentally, this happens to be the 500th post on this blog. Bearing in mind how long this place has been open for business, some might consider that slacking. Nevertheless, it is a milestone of sorts and worth mentioning in passing if nothing else. So my sincere thanks to all of you who have contributed so much to the shared experience over the years – I couldn’t do it without you. Stay safe and well everybody!