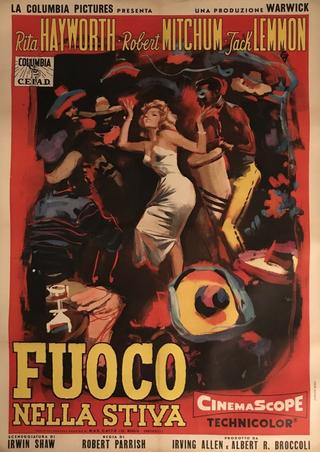 Romance, revenge and renewal – introduce a movie from the mid or late 1950s with those words and the chances are people will think you’re talking about a western. I guess there’s a point that could be made here about those themes being more a reflection of the era than a specific genre, even if that genre seemed to favor them more or treat them with greater sensitivity. Fire Down Below (1957) is certainly not a western – if it’s necessary to find a label, then I suppose it could be called a kind of Caribbean adventure/melodrama – but it does take a good long look at the three words I used as an opening. Of course it also follows the cardinal rule of moviemaking by ensuring this is woven into a consistently entertaining story.

Many a good yarn has originated in a bar, and this one essentially begins there. Tony (Jack Lemmon)  and Felix (Robert Mitchum) are two drifters, the kind of figures who seemed to abound in mid-20th century movies, men who have either lost something in life and are casting around for it, or who have never possessed it in the first place. A combination of curiosity, disillusionment and aimlessness has drawn these two to the Caribbean, and fate has thrown them together as joint owners of a clapped out boat. Their morals are, shall we say, flexible and they’re not overly particular about how they earn a dollar. So it is that Irena (Rita Hayworth) comes into their lives, a stateless person hailing from somewhere in the Baltic and now in need of someone to smuggle her through immigration. While the two men are friends they are very different characters, Tony being a romantic idealist whereas Felix is jaded to the core. The effect on these two of sharing a confined space with an attractive woman is as powerful as one might expect. Enthusiasm, desire, envy and bitterness all make an appearance as the tensions simmer in the tropical heat and eventually boil over into conflict and betrayal. The upshot of it all is that Tony swears vengeance on his former friend, but there will be a further trial to be endured before any form of closure can be achieved.

I don’t  imagine it’s any coincidence that the ship carrying Tony back  for his longed for reckoning is named Ulysses. Just like the hero of Greek mythology, his is a long journey home, not quite a decade perhaps but it certainly develops into a supreme challenge and, as with all fables, there is a lesson to be learnt. Vengeance is a wonderful narrative device, it drives characters toward a confrontation, frequently with their own personal demons, and the better tales leave it in no doubt that it’s an unworthy goal. I think Fire Down Below is one of these better tales and the way the conflict is ultimately resolved lays bare the lie at the heart of the quest for revenge. Personally, I think it’s hugely satisfying that after the great conflagration, both emotional and physical, everything is settled not through violence but with a simple kiss. It’s somehow fitting that it is Irena who emerges Athena-like to restore harmony.

Robert Parrish was in the middle of a very strong run here, and would follow this up with two exceptional westerns, Saddle the Wind with Robert Taylor and The Wonderful Country which reunited him with Mitchum. This was a rich period for the director, blending timeless stories, attractive visuals and the kind of themes that defined an era of filmmaking. The movie looks very good and makes fine use of its locations, as shot by Desmond Dickinson,  but it’s not just a glossy travelogue. Parrish was adept at these stories of intertwined relationships and crises of conscience, and he seemed to raise his game when presented with the right material.

I said at the beginning that the movie could be characterized in three words and it’s also true that it all hinges on three different people. Jack Lemmon had already won himself an Oscar in John Ford’s Mister Roberts, and Fire Down Below was another step on the path to growing stardom. He’s a good choice for the mid-West rover; he had that fresh charm and impishness about him at this stage that made his romanticism believable, as well as the subsequent shattering of illusions and his thirst for revenge. The only point where I felt skepticism taking over was at the notion of him going head to head with a bull like Mitchum in a stand-up brawl. Mitchum is his typical cocksure and swaggering self, looking askance at the follies of the world and, you feel sure, not sparing himself any of that acerbic assessment.

However, everything ultimately depends on Rita Hayworth’s Irena. She provides the motivation for all the drama and passion, and I think the honesty of her performance is a big plus. This was her return to the big screen after an absence of four years and, by all accounts, a truly rotten and abusive marriage to Dick Haymes. She wasn’t yet 40 years old but she had about her the aura of one acquainted with disappointment, a woman grown aware of both the pros and cons attached to her beauty. I’m back with honesty again, but there is a raw frankness to her admission at one stage that she has debased herself in life, and the need this woman has to recapture some sense of self-respect is pivotal. Her great triumph, dramatically and spiritually, is sealed right at the end – one simple action serves to restore her own self-esteem, redeem her lover,  and grant a precious gift to his rival, dignity.

I have an old DVD of Fire Down Below which was released many years ago and it still looks quite strong with rich colors and an attractive CinemaScope image. I understand it’s recently been included in a keenly priced 12 movie set of Hayworth’s films on Blu-ray via Mill Creek, and I imagine it will look even better in high definition. To date, I don’t believe the film has had an official release in the UK, an omission I would have thought one of the independent labels might seek to correct. Anyway, for the time being, I’ll leave you with Jeri Southern’s rendition of the theme tune:

76 thoughts on “Fire Down Below”