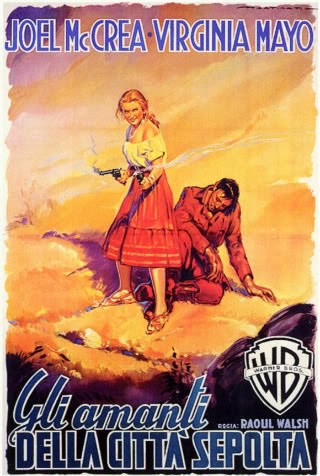 The sun travels west…and so does opportunity.

Are remakes ever better than the originals? The common consensus usually says no and there are countless ill-judged and frankly cack-handed examples that would seem to back that up. However, once in a while, it is possible to come across those rare exceptions to the rule. John Huston’s version of The Maltese Falcon is a notable case in point, although that movie had the luxury of building on two predecessors that were markedly inferior. What’s altogether more difficult is to improve upon something that was pretty good in the first place, and it’s inevitable that opinion is going to be divided over the alleged improvement – Hitchcock’s two shots at The Man Who Knew Too Much being a good example. Colorado Territory (1949) is in a similar position since it’s a reworking by Raoul Walsh of his earlier hit High Sierra, and in my opinion the remake comes out on top this time.

Wes McQueen (Joel McCrea) is a notorious outlaw, languishing in jail and awaiting a date with the hangman. However, a visit from an old dear professing to be his aunt leaves McQueen in possession of the articles he needs to effect his escape. It turns out that this was all arranged by an old associate who has need of McQueen’s services one more time. Making his way west by stagecoach he finds himself sharing the ride with a new settler and his daughter Julie Ann (Dorothy Malone). A deadly encounter with a gang of thieves en route highlights McQueen’s particular skills, and earns him the gratitude and (perhaps) the friendship of his fellow passengers. This sequence also draws attention to the fact that here we have a man grown weary of his profession, who dreams instead of starting a new life and sees in Julie Ann a reflection of the woman he once loved and lost. If he’s ever to have a crack at that longed for new beginning though he must first get this final job out of the way. It soon becomes apparent to McQueen that he’s going to have his hands full just keeping his shifty cohorts in line, and it’s not made any easier by the presence of a sultry half-breed called Colorado Carson (Virginia Mayo). The bulk of the movie’s mid section takes place in an old ruined town populated solely by the would-be robbers and the ghosts of the past. This bleak and desolate setting contributes enormously to the sense of doom and despair that hangs over the whole film, and it’s also a perfect backdrop for the escalating tension and jealousy among the characters. When the robbery does take place nothing goes according to plan (or at least not the way McQueen planned it) but it does give Colorado the chance to show her worth and her loyalty. Just when it looks like these two might have a chance to break out of the world they’ve spent so long locked into fate comes along and deals another blow, leading McQueen to comment: It means we’re a couple of fools in a dead village dreaming about something that’ll probably never happen. This leads to a powerful climax, atop a sun baked mountain and among the ruins of an ancient Indian settlement, that packs a real emotional punch and is sure to stick in the mind of anyone who’s seen it.

Raoul Walsh’s direction is highly assured and tight as a drum right from the beginning. A good portion of the movie takes place outdoors and with a liberal sprinkling of action, both elements playing to the director’s strengths. His handling of the attempted stagecoach hold-up near the start and the later train robbery is exemplary with editing, camera placement and pacing all judged to perfection. With Walsh you kind of expect him to get those things right, but he doesn’t disappoint in the more intimate scenes either. It helps a lot that his principal stars were all on form, and I couldn’t fault any of the performances of McCrea, Mayo or Malone. Joel McCrea was great in stolid parts and he put his talents to good use in this anti-heroic role. He had that low key quality that usually shines in westerns and the part of Wes McQueen seemed to fit him like a glove. The scene where he finally tumbles to the true nature and motives of Julie Ann is a fine example of his underplaying, and it’s all the better for that. Which brings me to Dorothy Malone; her role is that of a grasping and shallow woman and if it’s compared to Joan Leslie’s in High Sierra it would be fair to say that Malone invested it with considerably more depth. However, Virginia Mayo is the one that acts everyone else off the screen with her blend of toughness, vulnerability and sensuality. She truly owns the climax of the picture but she has other memorable moments too, not least the aftermath of the robbery when she has to operate on the wounded McCrea. Comparing the performances of the three leads in Colorado Territory to those in High Sierra, I’d say that McCrea just about holds his own against Bogart’s more famous and more intense playing (both men brought very different viewpoints and styles to their work) whereas both Mayo and Malone outshine Lupino and Leslie respectively.

As far as I can tell, there are currently only two ways to obtain Colorado Territory on DVD. I viewed the Warner R2 release from Spain, and the transfer to disc is no more than adequate. There aren’t any major issues like tears or splices and the image is generally quite detailed with good enough contrast. Nevertheless, the print is clearly in need of a good digital scrub as there are speckles, scratches and cue blips all the way through. From the few comments I’ve seen the Warner Archive disc from the US sounds like it suffers from the same sort of problems, so it may be they both used the same master. The R2 disc is completely barebones, with English and Spanish audio. The subs on the English version can be switched off via the remote – the main menu seems to suggest that the subs aren’t optional but that’s thankfully not the case. Colorado Territory is another first class western from Raoul Walsh, and I feel it generally trumps High Sierra. I’m very familiar with the Bogart picture and I like it an awful lot, but I have to give credit to Walsh for revisiting his earlier work and tweaking it successfully. This is an even darker and bleaker film with performances that are at least equal or, particularly those of the two actresses, superior to the original version. I recommend this one highly.