On June 25 1876 Lt Col George Armstrong Custer led his famed 7th Cavalry into the valley of the Little Bighorn, and into the pages of history. Exactly how subsequent events unfolded have remained the subject of debate and conjecture to this day. What is certain is the result of that fateful engagement between Custer’s 7th and the enormous force of Indian warriors, largely Sioux and Cheyenne, ranged against them. Custer and his entire command were massacred, wiped out to a man. Over the years, that event has come to symbolize different things to different people: heroism, folly, retribution, or flawed judgement. A number of films have offered various interpretations of what transpired in the heat of battle, and a few have also turned their attention to the aftermath. 7th Cavalry (1956) is one of those movies that looks at what followed and, for a time at least, toys with the notion of saying something definitive about the actions of Custer. Ultimately though, it backs away from this – it’s essentially a film of two parts, with the potentially interesting beginning gradually giving way to a more familiar and standard outdoor adventure that’s nowhere near as satisfying as it could or should have been.

The story is told from the perspective of Captain Benson (Randolph Scott), apparently one of Custer’s favourites, who is first seen returning to Fort Lincoln in the company of his bride-to-be, Martha Kellogg (Barbara Hale), shortly after the ill-fated Little Bighorn expedition. At this stage Benson is unaware of what has befallen his regiment, but the uneasy silence hanging over the fort as he approaches it alerts him to the fact that something is badly wrong. These opening scenes are eerily atmospheric, as we follow Benson through the deserted fort, and share in his confusion and sense of foreboding. And then the full, horrific truth is revealed – the overwrought widow (Jeanette Nolan) of one of the slain soldiers confronts Benson and tells him of the massacre and the ugly fate of those who fell, practically accusing him of cowardice and deception in the process. What follows is the return of the surviving units, the establishment of a board of inquiry and the airing of various recriminations. The inquest into this military disaster is to be conducted by the father of Benson’s betrothed, a stiff and uncompromising army man of the old school (Russell Hicks) who has always regarded his potential son-in-law with suspicion at best. This section is where the film is at its strongest, holding out the possibility that a range of themes, ranging from the classic one of redemption through notions of honour and class prejudice, will be  delved into. Yet few of these, barring the former, are ever fully explored as the movie progresses. The second half sees the tone, emphasis and setting shift completely as the investigation winds up rapidly and Benson sets out on a suicidal mission to recover the remains of Custer and the other officers of his command. Here we retreat towards more standard fare as Benson picks a troop of “volunteers” made up of drunks and shirkers (Jay C Flippen, Denver Pyle, Leo Gordon, Frank Faylen et al) who also avoided the initial battle to undertake the perilous mission. Despite being weaker, this portion of the movie is not without its own points of interest, not least the introduction of the idea of spirituality. Sadly though, here’s another potentially fascinating avenue that’s left undeveloped and actually treated in a hokey fashion in order to facilitate a convenient climax. 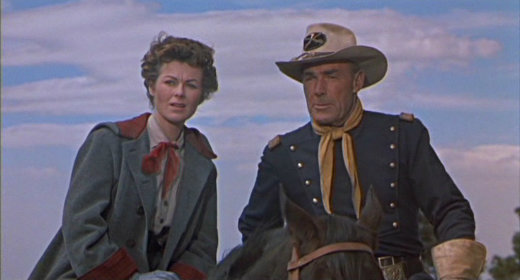 Over on his site on 50s westerns yesterday, Toby made a very good point when he mentioned Night Passage. If you follow that link you will see exactly what he was saying, and the essence of it is that the way we approach a film, or the weight of expectation that we bring along, can unfairly colour our assessment of it. It’s an idea that I’ve had buzzing around in my own head for a while too, and Toby’s reference to it made me wonder if it didn’t have some application to the movie in question here. What I mean is this: how far does one’s preconceptions based on cast, crew and subject matter impact on the evaluation of a movie? In this case, we have a mid-50s western starring Randolph Scott, directed by Joseph H Lewis, and dealing with one of the most controversial figures in western lore. I think all of these factors are bound to raise expectations in the minds of viewers, expectations on which the finished product doesn’t really deliver. Is that position fair though? On consideration, I think it is, or partially so at least. Lewis has a reputation for making tight and economical little B pictures that frequently transcend their modest production values and offer visual and thematic riches. I don’t think his direction is especially weak in 7th Cavalry, but the script, and its execution, tries to pack too much into a pretty brisk running time. There’s simply too much going on and too little time to expand upon any of it. Ultimately, we’re left with a first half that flatters to deceive, and a visually attractive follow-up (beautifully shot by Ray Rennahan) which leaves us short-changed. The specter of Custer hovers over proceedings throughout, and indeed helps effect a resolution which is far too pat for my liking. I do wonder if the film had had a director and star of lesser standing whether my overall reaction would have been different – I don’t know, but it is something to ponder.

And back again to expectations. Randolph Scott made 7th Cavalry just as his collaboration with Budd Boetticher was about to see his iconic status within the western genre fixed permanently. It’s difficult to put that thought to one side while watching the movie but, in all fairness, Scott acquits himself well enough despite the shortcomings elsewhere in the production. Anyone familiar with this site will be well aware of my admiration for Scott, and the roles he took on in the latter stages of his career are easily my favorites. No one ever played pride on screen quite so effectively as Scott, and that aspect forms the cornerstone of his portrayal of Benson. His quiet dignity and innate self-confidence are to the fore as he plays a man whose motives and character are called into question by almost everyone – it’s not quite the conflicted loner that he and Boetticher would so successfully explore but it’s not a million miles away either. As the principal female lead, Barbara Hale is fine, yet the role is limited in scope and offers her few opportunities. The supporting cast in the film is particularly strong – Jay C Flippen, Frank Faylen, Leo Gordon, Denver Pyle and Jeanette Nolan all have their chances to shine and deliver telling little performances, with Faylen and Flippen getting the more interesting and rounded roles. I also want to take this opportunity to mention the small (yet pivotal in terms of the plot) part played by the recently deceased Harry Carey Jr. Over the years, his presence contributed a lot to so many films, especially westerns, and his passing sees yet another link to the golden age of cinema severed. In 7th Cavalry, as in so many movies, Carey displayed an honesty and simplicity that always helped ground a picture and added a certain warmth.

7th Cavalry is one of those films that has been hard to get hold of in an acceptable edition on DVD. There are a number of options available, but most are problematic in one way or another. There’s a French release by Sidonis that reportedly sports a fine transfer but forces subtitles on the original soundtrack, there’s a UK disc that I understand is of appalling quality, and there are no fewer than three editions in Spain. Of those Spanish releases, two are either full frame or non-anamorphic letterbox transfers. The one to go for is this edition by Regia Films, which sees the movie paired up on separate discs with another Lewis title Terror in a Texas Town. The disc has a good anamorphic widescreen transfer, with subtitles which can be deselected via the setup menu. The print used is in pretty good condition, without any noticeable damage, although the colours can appear slightly muted on occasion. In the final analysis, I’d have to say 7th Cavalry is a middling western; there is the promise of something different that’s never fulfilled, and that’s what I find most disappointing. 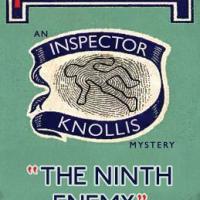 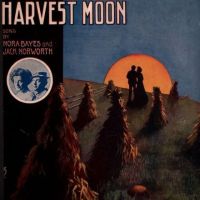