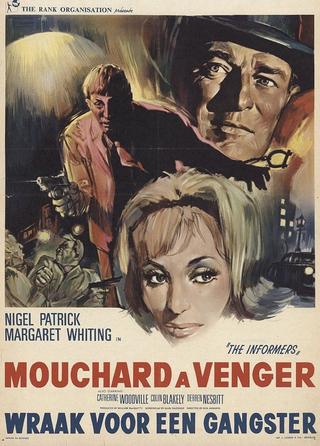 I’m going to stick with 60s crime for a bit longer, following on from the last entry. It seems safe to say that a harder edge had crept into mysteries and thrillers by the early years of the decade – of course I’m speaking in general terms here and am not for a moment suggesting that this phenomenon hadn’t made an appearance before, nor that it sprang unprovoked from nowhere. No, as with any trend in cinema, it developed gradually but it was certainly more apparent by the time The Informers (1963) came out. It’s possible that the growing permissiveness and the opportunity for greater frankness in the depiction of not only violence but also sexuality and shifting social mores spurred the filmmakers on to throw too much into the mix here. A few years before or perhaps later might have allowed a more pared down script where the focus could have been a little tighter, but that’s a minor criticism.

The title tells us what the main thrust of the story is, and right from the beginning we’re in no doubt that it’s a tale of cops, gangsters and the people who form a bridge between their converging and diverging spheres. Chief Inspector Johnnoe (Nigel Patrick) is the protagonist, a Scotland Yard man of the old school who relies on the tried and trusted methods his superior Supt. Bestwick (Harry Andrews) is keen to move away from, namely the practice of using informers and acting on “information received.” This is a dangerous game for all concerned, relying on mutual trust and extreme caution on both sides, and the possibility of a breakdown in communication, poor timing, treachery and sometimes just bad luck can toss a large and potentially fatal spanner in the works. And that’s essentially what concerns us here. In his quest to produce results in the investigation into a spate of safe-cracking jobs, Johnnoe turns to his long-time pigeon, with serious consequences for all. 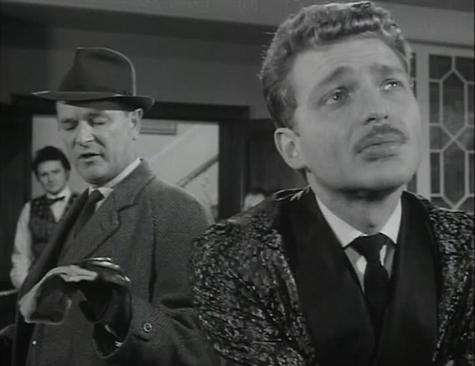 I’ll have to confess that I’ve only seen a small fraction of the work of director Ken Annakin. His was a fairly long career, covering a wide range of genres so I can’t say why I’m not more familiar with him. The Informers is a strong piece of work, suggesting I should take a closer look at some of his other films though. There is an attractive blend of action, suspense and character work, not to mention the various social issues which are either woven closely into the plot or touched on more lightly. Aside from the core police yarn, we are presented with aspects of Johnnoe’s home life, strife and competition at work, the abusive relationship of one of the villains and his girl, the difficulties of single-parenthood, hints at racial tensions, and more. As I said above, that’s a lot of material to pack in, even if a lot of it is largely incidental. It does add to the richness of the script but, perhaps because of my recent diet of briefer and more direct storytelling, I still found it rather dense.

Nigel Patrick is an interesting lead, suave and coolly self-assured to start and increasingly frayed as he stumbles deeper into the criminal morass than he’d intended to. He was over 50 when The Informers was made and there’s no attempt to gloss over or hide that, something we tend to see less now where leads generally have to pretend they are almost indestructible superhero types. As the  villains he’s up against both Derren Nesbitt and Frank Finlay are excellent value, brassily flash and quietly menacing respectively. It’s pleasing too to see Colin Blakely get a nice intense part with a fair amount of screen time as a vengeful anti-heroic type. His real-life wife Margaret Whiting has a large and significant role, helping to draw together the diverse plot strands at the climax. The other female character of Johnnoe’s wife, played by Katherine Woodville, is underdeveloped though. Nevertheless, there’s an incredible supporting cast with Roy Kinnear, Allan Cuthbertson, George Sewell, Harry Andrews and John Cowley among others.

The UK DVD of The Informers looks reasonably crisp for the most part but I can’t imagine the Academy ratio presentation is correct. It’s a very enjoyable and well made crime picture, with an incident-filled plot and good performances, so it would be nice  to see it revisited in Hi-Def at some point in the future. Well, we can hope.

14 thoughts on “The Informers”