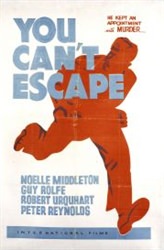 Aside from the visual motifs, film noir leans heavily on the presence of certain thematic elements. Betrayal and suspicion figure strongly, and crime of some form is usually involved, but perhaps the most important ingredient of all is the product of the ill-starred marriage of bad luck and stupid decision-making. It’s difficult to get away from the fact that many (maybe even all) of the hopeless predicaments the characters in the noir world seem to blunder into time and again are essentially situations which could and indeed should have been avoided with the application of a little rational thought. You Can’t Escape (1957) offers a convenient illustration of this very point.

Peter Darwin (Robert Urquhart) is a successful author and a man with a quiet and easy charm. The beginning of the film suggests he’s a lucky guy too, happening to be on the scene to rescue  wealthy and eligible heiress Kay March (Noelle Middleton) and thus embarking on a relationship. Still, Darwin’s smoothness is of the superficial variety, and a late night call from another woman, one who is still in love with him initiates our noir-tinged series of events. Things are looking bad for Darwin – the girl is pregnant and wants him back, so his dreams of marriage and a comfortable future begin to recede rapidly. From here the situation turns increasingly grim as that poor luck results in an accident which sees the girl dead, and then the rotten decisions start to kick in – so begins the descent that is integral to film noir. 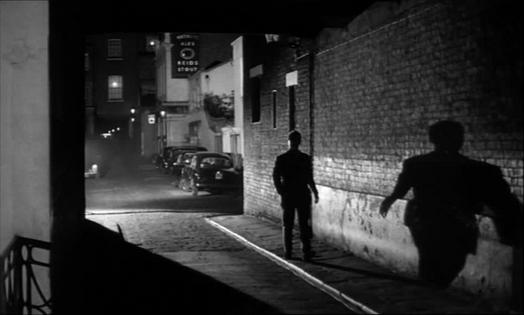 You Can’t Escape has no especially big names to draw an audience, at least no names that modern audiences will be all that familiar with. Robert Urquhart,  in the same year as he was starring in The Curse of Frankenstein for Hammer, was and remains probably the most recognizable face for most. He turns in a pretty solid and increasingly repugnant performance as the grasping writer who has plenty of charm but uses it to conceal a hard yet brittle core. He does very good work gradually revealing just how venal and manipulative his character is, a fine piece of villainy. Noelle Middleton is fine too as the woman who covers up for him at first and then slowly sees the error she has made, the monster she has been protecting and appalling way in which her love and loyalty has been misplaced. A good noir should have some kind of triangle and in You Can’t Escape the third arm is provided by the upright and self-effacing Guy Rolfe. Maybe he’s a little too upstanding and noble, and then again maybe he just appears so in relation to Urquhart’s craven chancer. And heading up the supporting cast is a sly Peter Reynolds as a grating journalist with an eye for a story and a penchant for blackmail.

You Can’t Escape has a strong noir look with some very well-lit shots and setups, the kind of thing many a Hollywood major would have been proud of a few years earlier. The man who directed this was one Wilfred Eades. His list f credits as director is a short one and I don’t believe I’ve seen anything else he shot. Mind you, I have seen one picture where he is credited as the writer, the 1958 swashbuckler The Moonraker, and that’s quite an entertaining little movie.

For a fairly obscure slice of Brit noir, Network made a welcome effort with the DVD presentation of You Can’t Escape. The film is offered in both widescreen and Academy ratios, the former is surely the correct one and the print used is in pleasing condition too. As for supplements, we get a trailer and also a gallery. All told, this is a neat example of British film noir and it’s certainly worth a look.

7 thoughts on “You Can’t Escape”