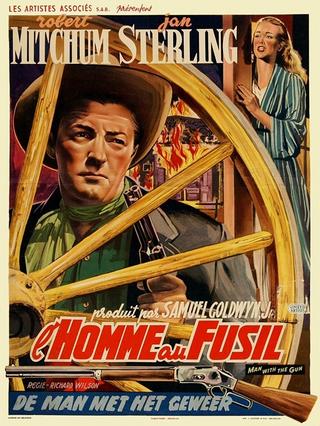 ” It doesn’t look nice for a town as small as Sheridan to have a graveyard as big as we’ve got.”

Man with the Gun (1955) is what I think of as a small production. Sure there’s a big name lead, a supporting cast full of classy and familiar faces, and also some fairly big hitters on the other side of the camera. Still, there no location work and the action is all confined to the studio backlot, which indicates a tight budget. So I call it a small production. Even so, as the quote above indicates, there’s a pretty high body count for such a brisk and spare film but the onscreen violence never appears gratuitous, something I always appreciate.

Sheridan City carries a grandiose name for a mean little backwater, a shabby-looking settlement clinging on to the periphery of civilization. The opening moments add mean-spiritedness to the general meanness when a horseman rides along the grim main street, a dog darting out to bark and yap alongside him. And then he simply shoots the animal dead, not for any particular reason – just because. This is Ed Pinchot (Leo Gordon) a troubleshooter for local bigwig Dade Holman. The latter has been tightening his grip on the town itself and land surrounding it, and notions of law, justice or just common decency have been getting correspondingly squeezed. Into this increasingly tense atmosphere comes another rider, a grey clad figure with a fearsome reputation. He’s Clint Tollinger (Robert Mitchum), a professional town tamer who happens to be passing through on an unrelated matter. His business is with Nelly Bain (Jan Sterling), the manager of a group of saloon entertainers, and Tollinger’s former love. This gunman’s services seem to be just what Sheridan City needs and the fact it ties neatly in with his personal affairs is a good enough excuse for him to stop a while. 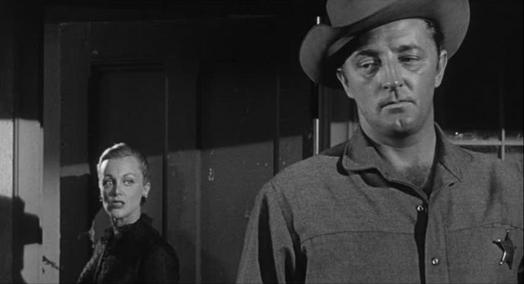 The town tamer western is a variant that allows for plenty of rumination of the role of justice and the weaknesses of the legal system. These kinds of movies concern themselves with societies where the rule has law has broken down to the point where only the intervention of an outsider can restore a community’s faith in its own ability to endure. The outsider should always be one of those types who live by their wits and their ruthlessness, a man with a gun. The role of the outsider always appeared a good fit for Robert Mitchum, a man who, despite his star status, forever gave the impression of not really being an insider. There was that wry detachment about the man which made parts like this ideal, and he does look the real deal as he struts purposefully around and lays waste to the string of largely ineffectual semi-hard men the local land baron sends his way.

Still, a movie needs a stronger hook than that to grab and maintain our attention. Drama requires an emotional core if it’s to raise itself above the level of juvenile thrill-seeking. In Man with the Gun that comes courtesy of the subplot involving Jan Sterling and her previous relationship with Mitchum. Right from the beginning there is a strong sense of sadness and regret floating around these two grim and austere people; they circle one another cautiously and Sterling is the one who ensures contact is withheld and distance remains constant. I’m not going to go into the details back of it all as I think it amounts to a spoiler for those who haven’t seen the movie. What I will say though is it offers a layer of depth and when the big revelation comes it triggers the films main set piece, the huge conflagration Mitchum sets off to cauterize both his and the town’s wounds. 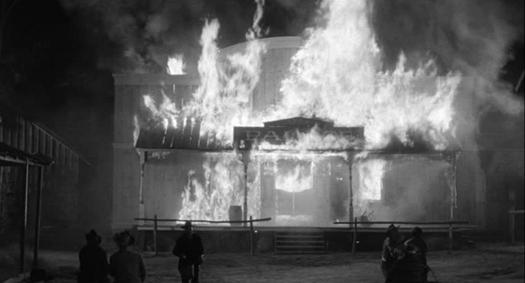 As I mentioned at the very beginning, this film has an enviable cast of familiar faces on show. Karen Sharpe gets a substantial role as a young girl both drawn to and vaguely repelled by Tollinger’s frank acknowledgement of the persuasive power of violence. It’s a nicely judged performance and benefits from not having to navigate the emotional heat inherent in Sterling’s part, allowing the viewer to sample a different, less charged perspective. There’s also good work from Emile Meyer, in sympathetic mode for a change, and from Henry Hull, who seemed to be channeling Walter Brennan as the cautious marshal. You can usually tell the quality of a movie by the caliber of its villains and anything that features a lineup with Ted de Corsia, Leo Gordon and Claude Akins positively demands one’s attention. I could go on listing names here but if I limit myself to saying that there’s an early appearance by Angie Dickinson well down the cast, the depth of talent involved ought to be apparent.

A word now for those behind the camera. Director Richard Wilson might have a comparatively brief list of credits as the man in charge but his work under and alongside Orson Welles is significant, and no man who spent that time around such a cinematic titan could come away the poorer. And what can one say about Lee Garmes? Here was a man whose experience stretched back to Hollywood’s pioneering days and who was responsible for shooting some of the most visually attractive and remarkable works committed to film – Josef von Sternberg’s Shanghai Express being just one example.While Man with the Gun doesn’t have that kind of baroque richness there are flashes of Garmes’ flair, notably that set piece fire scene I referred to earlier. Finally, I’d like to make a brief comment on Alex North’s appropriately spare score and the fact that there’s a wonderfully melancholy quality to the tag he employs for Mitchum’s character.

For a time Man with the Gun was only available on DVD in an open-matte transfer. In truth, aspect ratio aside,  it wasn’t bad in terms of picture quality. Now there are DVDs and Blu-rays available in the US (Kino) and Europe (via Koch in Germany) so good quality presentations are relatively easy to access. I don’t suppose too many people will claim this is a great western but I quite like it, and a lot of that is down to the tone achieved by the accomplished playing of Mitchum and Sterling. Try it, if you get the opportunity.