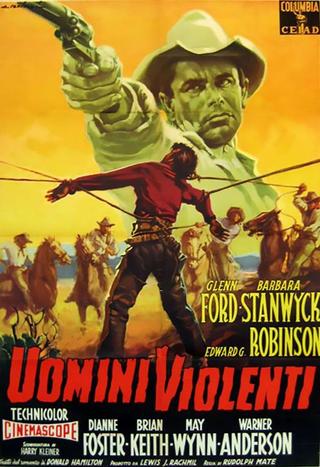 Quality is a hard thing to  define with any degree of precision. It’s something we all know when we see it but try putting it into words, creating a label for it which can be affixed to suitable candidates and you find yourself in trouble. If that’s a tough one, then differentiating or categorizing grades of quality is the kind of challenge one could base myths on. I, like probably most other people, will take some pride in my ability to recognize “a good movie”, even if that is merely my necessarily subjective view, and I might also try to impart to others exactly why I feel this is the case. But what separates a great movie from a simply good one? I genuinely don’t know, but again I can usually recognize it. All this abstraction leads me to The Violent Men (1955), a Rudolph Maté directed western with a superb cast and the kind of names on the other side of the camera which really ought to ensure its comfortable position among the acknowledged greats. Yet it doesn’t belong there, it’s not poor by any means but never rises above the level of quite good. And I can’t help but wonder why that’s so. Needless to say, any and all ideas on the subject are welcome and will be taken into consideration.

The framework within which the story plays out is a classic one for the genre, the range war. The motivation behind it all appears to be ambition and a twisted kind of love, twisted by a its traumatic birth in violent circumstances. I say appears here because it’s really greed, or perhaps covetousness might be more accurate, which propels everybody and everything towards another of those fiery yet cathartic conclusions. We follow it all from the perspective of John Parrish (Glenn Ford) a Civil War veteran who came west in the uncertain hope of recovering from his wounds. Well he did recover, and clearly made a success, albeit a slightly reluctant one, of his time as a small-scale rancher. However, in something of a subversion of the standard western trope the dearest wish of this young man is to go east. That’s what he claims anyway, or at least it’s what his betrothed, Caroline Vail (May Wynn), has encouraged him to believe. When we meet Parrish he’s poised to sell out and be on his way to a new life, but there are clearly nagging doubts stalking him. He’s ready to sign everything over to local big shot and bully Lew Wilkison (Edward G Robinson), a battle-scarred old tyrant who rules the range with an iron fist but who fails to see the treachery taking place under his own roof involving his restless wife Martha (Barbara Stanwyck) and his shiftless younger brother Cole (Brian Keith).

I spoke about the path that leads to a blazing climax earlier, but it’s a long and slow-burning fuse that leads us there. The first half of the movie builds everything up carefully and methodically, as Ford’s character gradually comes to terms with his own doubts, his sense of responsibility to a place and a people who arguably saved his life and offered him a new start. As he watches injustice pile on top of vindictiveness, till cold-blooded murder is done before his eyes, we see him wrestling with his own indecision. Ford was, in my opinion, a master at pushing against his own natural reticence, a characteristic which colored and strengthened his best performances. This quality gets a solid workout in The Violent Men, the pressure rising incrementally until a release must be  sought.

If drama needs conflict in order to have meaning, then that conflict should be founded on the existence of a strong villain to give it the necessary momentum. The Violent Men presents the nominal bad guy in the form of Edward G Robinson and he growls, blusters and threatens his way through the first half with aplomb. Still, I don’t think he can be classified the main villain; although there’s some effectively sullen slouching from Brian Keith, and even a bit of mean braggadocio from a young Richard Jaeckel, the honor surely belongs with Barbara Stanwyck. Mendacious and manipulative to the end, she pulls the strings and directs the mayhem, easily seeing off any competition from the other women in the cast – May Wynn, Diane Foster and Lita Milan. In support, Warner Anderson is enjoyable as Ford’s dependable foreman and there’s a typically unctuous turn from James Westerfield.

Rudolph Maté began as a cinematographer and carried his talents in that area into his subsequent work as a director, generally turning out visually attractive and striking movies. With a man like that directing and the actual photography duties shared between W Howard Greene and Burnett Guffey, it shouldn’t be any surprise that the film looks exceptionally fine, aided by shooting in the familiar Lone Pine locations. The story derives from a novel by Donald Hamilton, of the Matt Helm stories (much admired apparently by John Dickson Carr) and The Big Country. Personally, the only book by Hamilton I’ve read is Night Walker, which was reissued in paperback a few years ago, and I rather liked it so I’ve a mind to see if I can locate a copy of this. Anyway, plenty of talent on display here so far and that’s further enhanced by having the score penned by the great Max Steiner.

So, we wind up in a similar place to where we started, looking at a mightily impressive list of highly talented contributors in a well made western that flirts with themes that allude to classical tragedy. Make no mistake, this is a fine and entertaining piece of work yet it falls short of what I’d think of as greatness. Nevertheless, this isn’t a major criticism, more something that piques my curiosity. Just to round it all off, while The Violent Men has long been widely available on DVD, the image could use a bit of a brush up and there’s the potential for a very strong Blu-ray. As far as I’m aware, no-one has  released a Hi-Def version of the movie and I think this is a title deserving of that kind of treatment.

75 thoughts on “The Violent Men”