Larceny (1948) spins a yarn which revolves around a scam, a con. The con man, the grifter if you like, is one who naturally, and as the name implies, trades on confidence. There is of course his own polished brass exterior, his professional mask, but of greater significance is the confidence he inspires, wins, and ultimately betrays in the mark. It’s a dirty business when all is said and done, the sacrifice of something as pure as trust for something as cheap and mired among our base instincts as greed  is the stuff of disillusionment. A famous parting line spoke of the stuff that dreams are made of, but then again it could be said that it’s only a short step from dreams to disillusionment, and therein lies the essence of film noir.

It opens with a sting almost gone wrong. Two sharp and smooth types, Rick Mason (John Payne) and Silky Randall (Dan Duryea), have been bleeding a wealthy Florida citizen and his similarly well-heeled friends, for a yacht club that will never be. They have amassed in the region of a quarter of a million dollars by the time their victim grows suspicious enough to confront them . And so it’s time to move on, this time to small town California and a grieving and gullible war widow. The goal this time is broadly similar: sell the notion of a fictitious war memorial to a scarred soul, and skip out when as much cash as possible has been obtained. A wholly reprehensible scheme, but one with a fair chance of success in a uniquely receptive social landscape, one still reeling from post-war mourning and confusion and casting around for some grain of hope to latch onto. Yet within the soft soap of Randall and Mason there are other gritty little grains: the uncontrolled passion and wandering eye of Randall’s trashy girlfriend (Shelley Winters), the professional and personal jealousy of two mistrustful rivals, an almost impossibly credulous widow (Joan Caulfield) and, most important of all, something called a conscience. 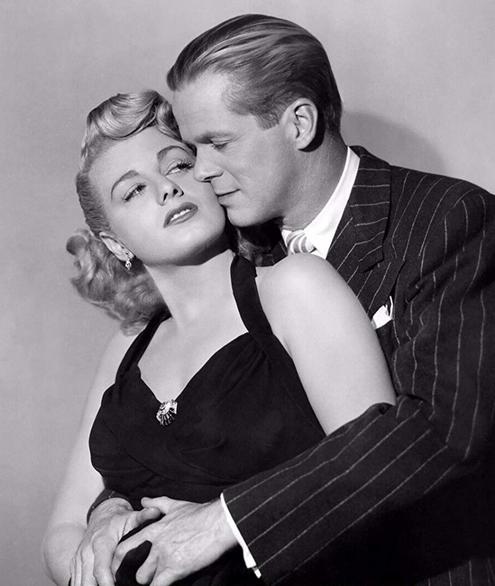 George Sherman is not a man one would normally associate with film noir. This is not to say he wasn’t suited to the form, the movie here is proof he was more than capable of handling its tropes and motifs with great skill, but his real forte lay elsewhere in terms of genre. Sherman’s westerns, particularly those from the golden era of the 1950s, are almost all (those which I’ve seen anyway) imbued with the spirit of redemption and renewal. It’s his apparently natural affinity for and empathy with these positive attributes which make him such a fascinating director of westerns. When it comes to film noir though, these strengths may, for some anyway, be regarded as a handicap. Personally, I don’t buy that; this is partly due to what I’d like to think of as an open-minded or expansionist approach to the genre. Essentially, I’m not keen on locking myself into absolutist positions since it rarely seems to offer us much as viewers if we start excluding and proscribing certain movies as a result of their failure to adhere to rigid, imposed dogma on what should or shouldn’t be permissible. That’s not to advocate a total free-for-all of course, but a little flexibility never hurts.

Just as the director of Larceny didn’t spend his career confined to one genre, neither did its stars. The personnel at the time may not all have been fans but the beauty of the studio system lay in the diversity of material it allowed (or forced, if you prefer) contracted actors and crew to become exposed to and familiar with. John Payne was a personable presence in musicals and romances, but the post-war years saw him shift the focus of his career radically. Larceny represented his first foray into “tough guy” territory and film noir, alongside westerns, saw him do some of his finest work. He’s in great form here, scamming Caulfield, fencing with Duryea and trading clinches and barbs with a spiky and sexy Shelley Winters. And Winters is possibly as good in her role as I’ve ever seen her, firing off some of the finest one-liners anyone was ever handed in a film noir. Duryea is as compelling as he always was (Silky is a superb name for a character and sums up the actor’s manner perfectly) and he displays a marvelous sense of menace. I remember not being all that impressed with Joan Caulfield’s range in The Unsuspected and I found myself having similar thoughts here – I can see how her character needs to project the kind of purity necessary to push the plot in the direction it ultimately takes, but I felt her innocence was overdone at times. But that’s just my take on it. As for support, it’s worth mentioning some fine contributions from Dan O’Herlihy, Dorothy Hart, Percy Helton and Richard Rober.

I would be utterly delighted were I able to post here that I had managed to track down a sparkling and pristine release of Larceny, one which could be eagerly snapped up by fellow movie fans. Sadly, that is not the case; the movie remains, to the best of my knowledge, unavailable for purchase. I watched it online, viewing a print that was very far from optimum condition. This is most certainly not the ideal way to see anything and I only resorted to this as no other option exists at the moment. At the risk of sounding like a hopelessly scratched vinyl recording, I can only reiterate my ongoing dismay at the absence of so many Universal-International title on DVD and/or Blu-ray.

I think it’s worth noting here at the end of this piece that it appears to be the 100th title I have tagged as a film noir, a small milestone. Mind you, I’ve no doubt that a number of those I’ve included over the years will be regarded by some as marginal entries. Ah well, so be it.