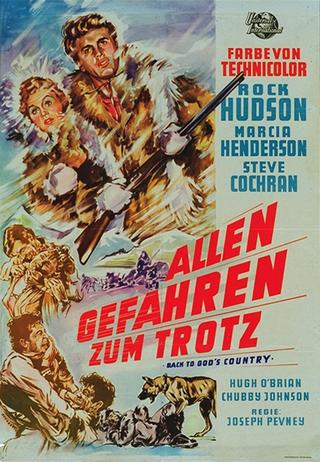 Rugged outdoor adventures have a timeless appeal and I think it’s true too that the cold weather variety carry with them an invigorating quality, as though the  crisp, chilled air blasting the protagonists on the screen adds a little freshness and energy to our viewing. A film such as Back to God’s Country (1953) is a largely formulaic affair yet is enlivened considerably by its sub-polar setting. Of course, following a formula need not necessarily be seen as a failing; handling and execution are key elements and, with the movie in question, I feel director Joseph Pevney brings a briskness to the piece that makes its hour and a quarter running time positively zip along.

It’s the late 19th century and we’re  in the icy north of Canada. Peter Keith (Rock Hudson) is running a schooner trading fur pelts in the US and is keen to get underway before the winter freeze sets in and leaves his vessel unable to sail. As such, he’s vexed to receive an official letter ordering him to remain in port until an inspection can be made of his cargo. That would mean a delay which might well see him sealed in for the season and the consequent hit to his finances it would entail. While he and his wife Dolores (Marcia Henderson) have made up their minds to ignore the order and put to sea anyway, it comes to the attention of both that there might be something fishy about the whole thing. Local bigwig Paul Blake (Steve Cochran) is expansive and hospitable yet there’s an oiliness about him and it looks like he may be behind the request, partly for financial gain and partly (maybe even mostly) because he far from honorable designs on Dolores. Thus, with rivalry and subterfuge established, the scene is set for a showdown which will play out for the most part over a couple of enforced journeys through the frozen wastes. 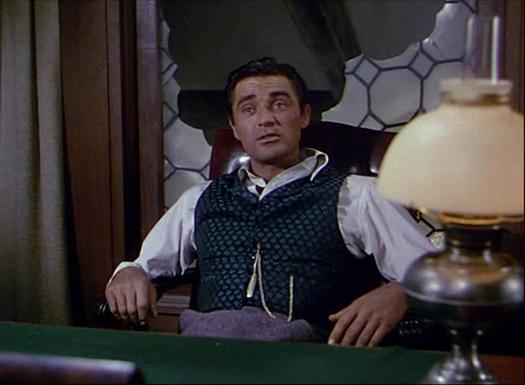 Back to God’s Country appears to have been filmed twice before, back in the silent era, and I can see how the combination of adventure, melodrama and romance would have drawn filmmakers eyeing a source with reasonably wide appeal. Now I’ve no idea how Pevney’s movie compares with those earlier iterations, and indeed I don’t even know whether they still exist or are available for viewing. What I can say though is that this movie represents a marvelous piece of escapism, a no-nonsense slice of entertainment with that characteristic aesthetic one associates with Universal-International pictures. The combination of studio shooting and some location work in Colorado and Idaho is handled most attractively by cinematographer Maury Gertsman, with Pevney marshaling it all with pace and energy. The story holds no real surprises, and arguably has its fair share of cliches, but the meanness, the naked self-interest and almost perverse covetousness of the villain add an edge and an unexpected extra layer.

Steve Cochran was born to play villains, his self-assurance and grace offer a sheen of sophistication, while all the time there’s a gleam in his eye that hints at a ruthlessness any time the main chance wanders into view. By and large, he plays it cool but there is one scene in particular – an assault on Henderson – where he, unfortunately, cuts loose and indulges in the kind of eye-rolling, over-the-top hammy histrionics that would put many a mustache-twirling cartoon cad to shame. His character is of course a thoroughly bad lot, a blackmailer and master manipulator with a history of grabbing possession of whatever and whoever he wants. And there’s a sadistic side to him that goes beyond mere greed, his treatment of Hugh O’Brian’s forger is a case in point, holding him in what amounts to bonded labor. O’Brian does well in that part too, allowing his natural charm to soften his own villainy and act as a counterpoint to Cochran’s. 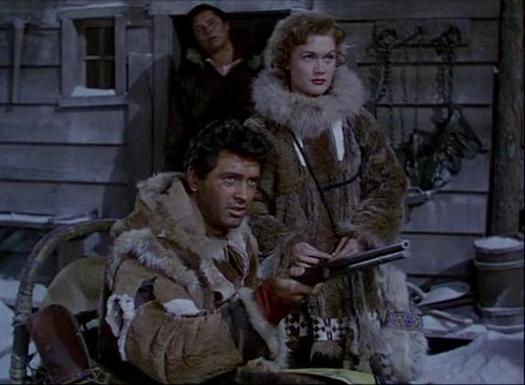 Pitted against these two are Rock Hudson and Marcia Henderson, and they make for an attractive and resourceful couple. Hudson was in the process of building his career at the studio (a career that Ross Hunter and Douglas Sirk would soon move to a whole different level) and this type of role, while not all that demanding dramatically, was the kind of thing  that couldn’t hurt. He gets to play it tough and heroic, even in the latter half of the movie when a broken leg sees him essentially confined to a sled. A good deal of the drama arises from a combination of Cochran’s machinations, the deteriorating weather conditions, and also some frankly poor decisions on the part of Hudson’s character. He makes amends for them, naturally, but this also gives Henderson the opportunity to prove her mettle. She too displays a hard edge when the chips are down, playing well off Hudson and holding her own quite convincingly when she has to.

Back to God’s Country may not be all that well-known but nor should it be all that difficult to locate. There seem to have been DVDs released pretty much everywhere – I have this Italian version which seems to have gone out of print and been replaced by another by the same company claiming a Hi-Def restoration  – still, I’d imagine all will be using the same transfer. Generally, it looks OK, but there is a bit of damage and overall ageing visible. Sometimes I think I could happily spend my days watching, and writing about, nothing but Universal-International movies; they’re that entertaining. There’s a polish and professionalism on show that mean even undemanding and average efforts like this offer a good deal of viewing pleasure.

Another view of the movie, from Laura, can also be accessed here.

31 thoughts on “Back to God’s Country”