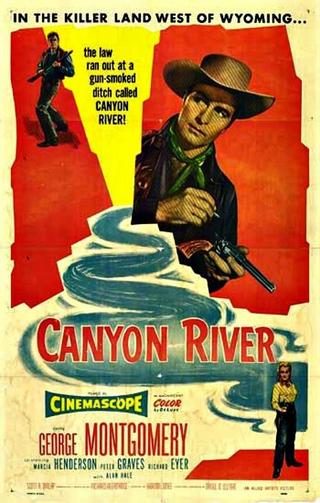 Back in the saddle. It’s been a while now since I’ve featured a western on this site, not that I’ve been consciously avoiding them, it’s just that other material has been occupying my thoughts as far as posting is concerned. Added to that is the fact I like to vary the content, to try to keep staleness at bay if nothing else. Anyway, I’ve found myself watching, and indeed writing up, a number of CinemaScope movies lately – others will follow in the weeks ahead. The first of those to make an appearance is probably the least of them, which is not to say it’s a bad movie. Canyon River (1956) is perhaps unremarkable yet it’s also entertaining and, what’s even more important, quietly satisfying in the way so many 1950s westerns manage to be.

There can be few things more satisfying than seeing a bullying loudmouth such as Robert J Wilke’s character have his pistol spectacularly kicked out of his hand and then get laid out by two well aimed haymakers. The man meting out this punishment in the opening scene is Steve Patrick (George Montgomery), a Wyoming rancher who may be facing financial difficulties but isn’t taking anything lying down. No, this is a man with a plan, albeit a plan which plenty of people will tell him he’s crazy to attempt. In brief, he wants to introduce a new cross breed of cattle, something which will involve a big gamble on his part and necessitate driving a herd along the Oregon Trail in the opposite direction and out of season. Aside from the hardships to be faced, there’s also the challenge of finding a crew willing to go along with this, not to mention the fact that the man he considers his closest friend (Peter Graves) is secretly plotting to take both his life and his herd. If all that didn’t represent sufficient difficulty, there’s also the matter of a young widow (Marcia Henderson) and her son (Richard Eyer) to consider.

What Canyon River presents is a fairly standard trail drive western, blending in that familiar yet always welcome 1950s focus on redemption and the potential for a fresh start. The redemptive aspect is related mainly (though not exclusively) to the greed and betrayal of Peter Graves’ character. I’m not entering spoiler territory here as the treachery is revealed to the viewer very early on and the knowledge of that adds a layer of suspense to the plot. How, or indeed whether, Graves will redeem himself is not resolved until late in proceedings and in the meantime another thread of redemption – more straightforward this time – is explored. This concerns the crew hired by Montgomery to undertake his unconventional drive. Well, they are an unconventional group, headed up by Alan Hale Jr and consisting of a ragtag bunch of criminals and ex-convicts. For them, this represents an opportunity to find a path back into society, a means of escaping destructive get-rich-quick schemes and winning back some degree of self-respect. Last but by no means least, the whole affair offers a chance of a fresh start for Montgomery himself along with Henderson and Eyer.

Canyon River, from Daniel B Ullman’s script, is a remake of the 1951 Bill Elliott western The Longhorn. Not having seen the earlier version, I can’t comment on that or make any comparisons but I do like this iteration. A number of films directed by Harmon Jones have been featured here in the past and I’ve found them all quite enjoyable. While this is a modest picture overall there is plenty to admire, from the attractive widescreen imagery, shot by director of photography Ellsworth Fredericks, to the feelgood positivity of it all, and that latter aspect is something I think we can all do with sampling in these stubbornly trying times.

A big part of what makes Canyon River work so well is the presence of George Montgomery. He imbues the part of Steve Patrick with an enthusiasm and verve that is infectious. However, what is even more important is the generosity and openness of the character; this is the key to the success of the central theme. It’s his simple faith in himself and human nature in general that draws in, inspires, and indeed shames some of the other characters. The sheer likeability of the man makes Graves’ betrayal of him appear even less appealing. I liked Marcia Henderson’s work in Back to God’s Country and she brings great warmth to her role in Canyon River, making the romance which blossoms between her and Montgomery especially sweet. This also applies to Richard Eyer, who is wonderful as the hero worshiping youngster. At one point, after a hard day on the trail, the boy quietly falls asleep by the fireside and Alan Hale’s reformed outlaw spots this.  Demonstrating unexpected tenderness, he carefully picks him up and gently deposits him in the wagon; it’s a fleeting moment but a telling one and a delightful little grace note.

Hale is extremely engaging all the way through and his gratitude is in stark contrast to the jealousy and duplicity of Peter Graves. Graves does fine work portraying this, and he also succeeds in getting across the inner turmoil of the character as the doubts and guilt slowly grow within him. Other villainous parts are taken by perennial louse Robert J Wilke, whom I spoke of above, as well as a somewhat underused Jack Lambert and Walter Sande. I sometimes feel no western would be complete were Ray Teal not to appear at some point, and he obligingly pops up as the cattleman who sells his herd to Montgomery.

Canyon River was an Allied Artists production and therefore it can be found on DVD via the Warner Archive. It’s a reasonably good looking transfer, in the correct aspect ratio and boasting strong, attractive colors. As far as I know, there are other copies available on assorted European labels. I remember coming across this movie on TV years ago and thinking at the time that it was passable but nothing special. Revisiting the movie recently, I came away with a far more favorable impression. Nevertheless, I don’t want to oversell it and have people thinking it’s some unmined gem that has just been unearthed. It is no world beater yet the mood, the message, and some good performances make for a very pleasurable 80 minutes of entertainment.