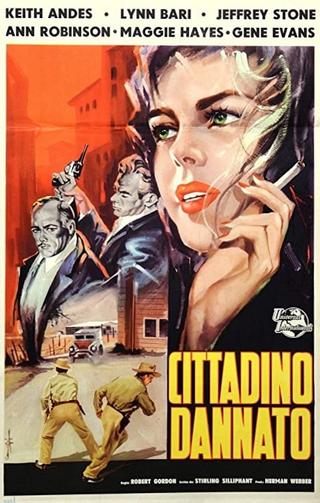 Today we have a genuine rarity (at least it fits my definition of the term) placed under the spotlight in another guest post courtesy of regular visitor Gordon Gates.

This is another of those unseen Universal International productions that really needs a general release. Damn Citizen (1958) is a by the numbers documentary style noir about police corruption. The story is based on real events and people. It stars Keith Andes as Col Francis Grevemberg. Grevemberg, an ex-army officer, is offered the command of the Louisiana State Police. Louisiana was at the time considered to be the most corrupt State in the Union.

Everyone seems in on the scam with officers looking the other way for their cut of the action. Every time Andes raids a gambling club or bordello, they find the place has been warned. So Andes decides to fire most of the force and start from scratch.

He starts a rigorous screening and training course hoping to weed out the crooks. When this fails, Andes decides to play the mob’s game and sends officer Jeffery Stone undercover. Stone pretends to be a crooked cop and gets himself thrown off the force. Some of the other fired cops have been working as gunmen etc. for the gambling mob and Stone is quickly offered a job.
***SPOILER ALERT – HIGHLIGHT THE  FOLLOWING***

Andes right hand man, Gene Evans, has also been working behind the scenes selling info to the crooks for the then hefty sum of $1,000 a week. Edward Platt plays the head of the mob. He offers Andes a bribe which is turned down. He then tries a bit of blackmail by having a woman peel off her duds in front of Andes while a cameraman snaps away.No dice, Andes steps up the pressure and Platt responds in kind. Someone pays a visit to Andes’ home and deposits the decapitated body of the family dog in his children’s bed. Then undercover cop Stone is murdered and his body left in Andes’ car. Now Evans steps forward and tells Andes about all the info he has collected by pretending to be an informant for the mob.

Andes then forces an old friend, Lynn Bari, who is a member of the mob, to turn State’s evidence. Doors are soon kicked in and guns produced and used.

Platt and his boys are hauled off for a long holiday at the State’s expense.

A real stand up policer with good work from the cast and crew. There is a small morals lecture at the start, but then the film goes right to speed and never lets up. Besides Andes, Bari, Evans and Platt, the cast includes Maggie Hayes, Ann Robinson and Clegg Hoyt. 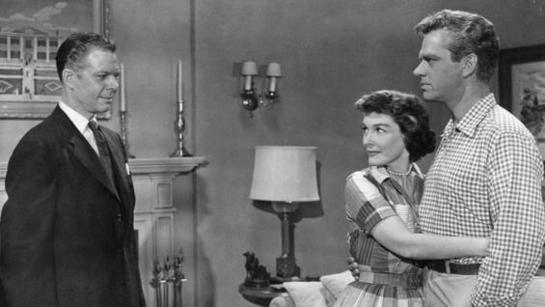 It is always nice to see Gene Evans in anything. He has the gruff cop, military type or western black hat down to a fine art. Fixed Bayonets!,  Armored Car Robbery,  The Steel Helmet, Wyoming Mail, The Long Wait, The Bravados, Park Row and Hell and High Water are just a few of his films.
Same thing with Lynn Bari. The slinky looker was called the “Woo Woo Girl” and was a popular pin-up girl during WW2. Pretty well only worked in B films but was a
pretty good actress.
The jazzy musical score is supplied by Henry Mancini of Peter Gunn and The Pink Panther fame.

The story is written by Stirling Silliphant whose work includes Nightfall, The Line-Up, and the series M-Squad, Naked City, Route 66 and Alfred Hitchcock Presents.

The d of p was Ellis W Carter who worked on The Human Jungle and the George Blair directed, Lonely Heart Bandits. ( A plug for Lonely Heart Bandits which is one of my fav low rent noir) Carter also lensed one of the better 50’s Sci-Fi classics, The Incredible Shrinking Man.

Availability is currently problematic and even an online viewing seems out of the question. There is however a trailer which gives a flavor of the movie.