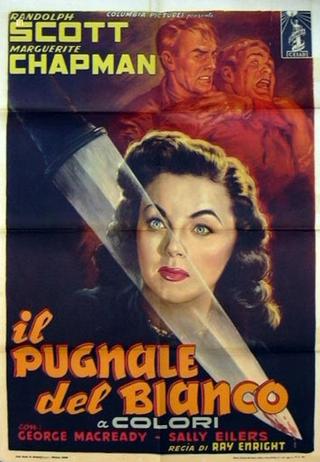 Revenge is a dish best served cold, or so the saying goes. Perhaps the truth is that it’s no dish at all, just an unappetizing craving arising out of wounded emotions. If anything, the coldness, or let’s at least say coolness, that inevitably arrives with the passage of time leads to a more satisfactory reckoning. Coroner Creek (1948) is what is commonly termed a revenge western, that is a story driven by the desire to settle a score and, as with the better examples of this variation on a genre, questions the desirability of this outcome and the effect on the protagonist.

A stagecoach being pursued by a band of whooping Apaches across the sun-baked badlands. That’s something of a cliché in the genre and it’s how Coroner Creek opens. While it may be a familiar and well-worn situation it’s still a dramatic one and does offer the twist of having the Apache raiders seen to be in the employ of a white man, one who remains unidentified as he methodically goes about shooting those within the stage, shooting all but one woman. Here we have the motivation for our protagonist Chris Danning (Randolph Scott) – although this isn’t explicitly stated till later in proceedings it is obvious enough from the start and I doubt if it constitutes a major spoiler. Nor does the identity of the man who Danning has determined to track down and kill. He pieces together enough information from a wounded Apache to allow him to set out across the arid southwest with an idea of who his quarry is. His path eventually leads to the town of Coroner Creek and the local strongman Younger Miles (George Macready). Danning’s game plan is to needle, snipe and provoke Miles into a reaction, to pick away relentlessly at his armor and tease threads from the cloak of respectability he has surrounded himself with. The brutalizing effect this is having on all concerned is made shocking clear on a number of occasions yet there is also a small flicker of hope amid all this darkness, one borne by the calm and steadfast hotel owner Kate Hardison (Marguerite Chapman). 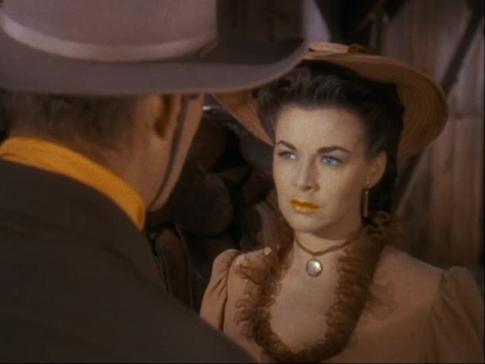 Coroner Creek, adapted from a Luke Short novel, has a strong spiritual element running through it. This is natural enough for a story dealing with a moral issue such as the quest for revenge. It’s Marguerite Chapman’s character who represents this spirituality most obviously, her religious faith (though never piety or sanctimony) is clear to see and her concern for Danning runs deeper than a simple attraction. The movie never shies away from portraying the dehumanizing power of vengeance and it’s the willingness to confront this that raises it above average. Director Ray Enright (Flaming Feather) does some of his best work in this picture and, alongside cinematographer Fred Jackman Jr, shoots from a range of angles and uses the light and shadow to great effect.

Did you ever get hit with a bullet? It’s like a hunk of iron ripping and tearing into you. It sets you on fire inside. Sometimes you don’t die right away. You just bleed and hurt for a long time.

Those lines are spoken by one of the characters late on, just before he gets to experience the truth of his own words in a scene that is memorable for its unflinching cruelty. In fact for a movie made in the late 1940s Coroner Creek is remarkably graphic. There is a sequence around the middle which involves the mutilation of two of the characters’ gun hands. This is mean enough in itself but the fact they act as bookends for a truly bruising encounter between Scott and Forrest Tucker (rehearsing for a similarly tough brawl a couple of years later in The Nevadan) adds to the shock value. However, it’s important to understand that none of this is gratuitous, it’s not put on screen simply to provide some cheap thrill. The picture is nothing if not frank, and it openly acknowledges the effects of violence on the characters, both physically and psychologically. 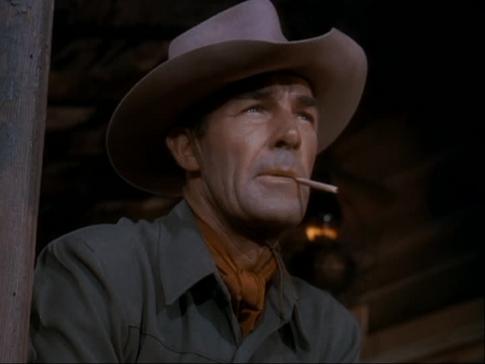 Scott naturally dominates the movie and continues on that path he’d chosen in the post-WWII years (although arguably it was a journey begun even earlier in the likes of Lang’s Western Union), a path which would trace the development and gradual maturing of his western persona. There are moments of gentleness and humor where his patrician charm shines through but these are overshadowed by the darker, driven side of his character, looking ahead to the obsessive quality he would then hone to perfection in collaboration with Boetticher. Marguerite Chapman, as noted above, helps to temper this somewhat and her benign influence is not to be underestimated. The other significant female part belongs to Sally Eilers, in one of her last roles here and working for ex-husband and producer Harry Joe Brown.  Her contribution is big enough yet it feels slightly truncated at the same time, as though it ought to have had a bit more depth than is ultimately the case. I’m left wondering if certain plot strands weren’t trimmed or curtailed, and there are a few instances of clumsy editing too.

Scott tended to do well when it came to villains to face off against and actors such as Richard Boone and Lee Marvin helped him raise his own game. George Macready (did he ever play a good guy?) is the bad man on this occasion and he is as cold and manipulative as one would expect. That carefully modulated voice, disconcertingly prim and menacing, is well used. He is strongly supported by Forrest Tucker; simultaneously amiable and rotten, he uses his physical presence to excellent effect. Alongside these two Douglas Fowley is shifty up until his spectacular demise while Joe Sawyer is wonderfully contemptible as the blowhard whom Scott threatens in a most chilling way – another of those hard-edged little scenes in a hard little movie. Of the others in the cast, Edgar Buchanan and Wallace Ford turn in the kind of carefully judged performances that make them a pleasure to watch.

Coroner Creek made its appearance on DVD  in the US some years ago in a Sony/TCM collection of Randolph Scott westerns . The movie was shot in Cinecolor, with the limitations of that process, and is variable in appearance. At times the image looks very strong and then weakens noticeably. All told though, I’d say it looks quite acceptable. The film shares disc space with John Sturges’ The Walking Hills and has a handful of supplements such as galleries and a short filmed intro by Ben Mankiewicz. I would place the movie among Scott’s more enjoyable and interesting efforts, and it should easily satisfy any fan of the star’s work.