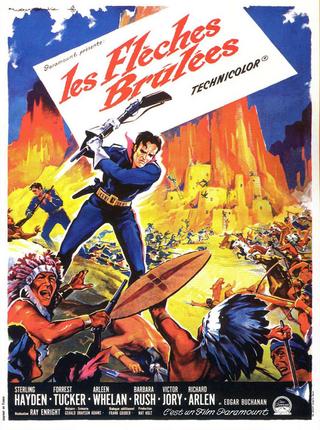 Having taken a break from writing about the genre for a bit, I think it’s time to return to the movies that have formed the bedrock of this site since its earliest days – westerns. Instead of getting into a thematically rich example, I’m going to look at a brisk, no-nonsense entertainment. Flaming Feather (1952) is exactly that; pacy, plot-driven and directed by perennial journeyman Ray Enright, the movie tells an enjoyable and undemanding story in an hour and a quarter, makes the most of its attractive locations and allows its accomplished cast to smoothly occupy the types of roles they were ideally suited to.

Arizona in the post-Civil War era and, as ever, there is a threat to the creeping influence of civilization. Sometimes the movies will focus on the menace of outlaw gangs, ruthless gunslingers, business rivals, or indigenous resistance. On this occasion, it’s something of a hybrid: a band of murderous and relentless Ute renegades who appear to be organized and led by a faceless white man, a man who is known only by the alias of the Sidewinder. Of course any villain, not least one who assumes the identity of a serpent, should sooner or later come face to face with his or her personal nemesis. The core concept that has been at the heart of all drama, from classical tragedy right down to popcorn fare such as Flaming Feather, is that one can only spend so long poking a finger in the eye of fate before some form of retribution descends. And so it is here that the Sidewinder pushes his luck once too often. By raiding and plundering the ranch of Tex McCloud (Sterling Hayden), he sets in motion a chain of events that will lead inexorably to his downfall. The hero in this case has the kind of implacable resolve that it’s best not to gamble against, and backing up his natural thirst for a reckoning is the small matter of a wager he has laid with a cavalry lieutenant (Forrest Tucker) regarding who is going to track down the perpetrator first. So we have a fairly straightforward setup, one which will be further complicated (though never unduly so) by the intervention of two women, Arleen Whelan & Barbara Rush, as it heads towards a memorable conclusion amid the ruins of Montezuma Castle. 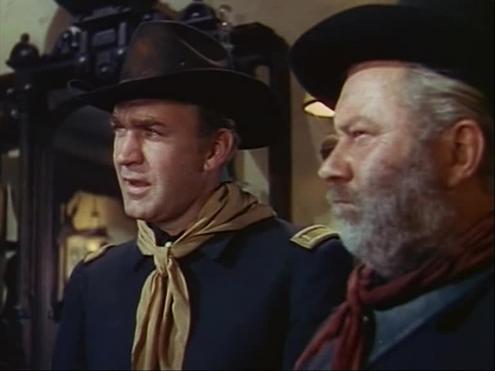 Ray Enright was nearing the end of a long career by the time he took charge of Flaming Feather. He only had one more feature ahead of him (a routine George Raft effort) and came to this off the back of a run of solid and enjoyable movies with Randolph Scott, Joel McCrea and Audie Murphy, as well as the extremely disappointing Montana with Errol Flynn. Enright is never going to make anyone’s list of great directors, but he was a competent studio professional and, given the right script, cast and crew, was more than capable of producing a good quality piece of work. This movie saw him shooting a tight and trim script penned by Gerald Drayson Adams, taking advantage of the dramatic Arizona locations, and enjoying the contribution of top cinematographer Ray Rennahan. The tone throughout is consistent – straight drama with a light sprinkling of well-judged humor – and the big action set pieces in the third act are nicely handled.

One day I may well devote a post to distinctive voices and styles of delivery in the movies. I could turn out copy on Dan Duryea’s wheedling, Orson Welles’ cajoling, Burt Lancaster’s pitter-patter, and perhaps Sterling Hayden’s confrontational abruptness. The latter carries an air of authority, it doesn’t leave a great deal of room for maneuver or subtlety but it certainly evokes the straight-shooting hero who favors the direct approach. And this is exactly the type of performance Hayden delivers; there’s no shading or nuance here, just a portrait of a wronged man on a quest for justice, which is perfectly fine under the circumstances. Any consideration of instantly recognizable voices would have to include Victor Jory, a man whose characteristic tones typically put me in mind of someone trying to sell a used bottle of snake oil, and possessed of a face which seems always to have been a stranger to sincerity. He was born to play villains and I don’t imagine it’s going to constitute a spoiler of any consequence to say that this is the role he fulfills once again. 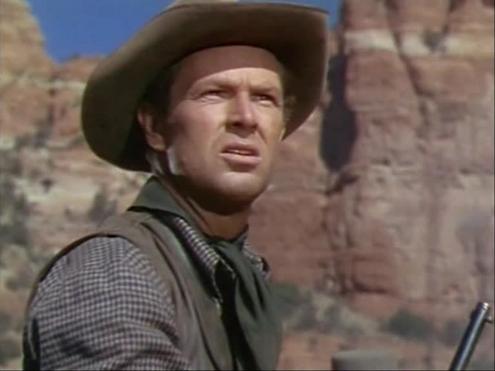 There are some actors who, when their names appear among the credits, give viewers a reassuring feeling, a comforting knowledge that, whatever else may be lacking, they can be depended on to turn in a strong performance. Forrest Tucker was such a figure; he was entirely at home in westerns and he brought an authenticity to the screen. If I have any complaint here, it’s that he’s missing from the action for far too long in the mid-section. Of the two female roles, Arleen Whelan gets the showier part as the duplicitous saloon girl and runs with it. Barbara Rush is given a simpler and more one-dimensional character, but bigger and better things were just around the corner for her, starting with Jack Arnold’s It Came from Outer Space and then a a number of fine movies for Douglas Sirk and Nicholas Ray. In support, we get Edgar Buchanan, Richard Arlen and a small but welcome part for Ray Teal.

Flaming Feather was made for Nat Holt Productions via Paramount. There are a few DVD releases of the film in European countries – Italy and Germany for sure, although there may be others. I have the German disc and it’s what I might term OK. The image is clear enough but it’s obviously using an older master and there is that softness and lack of “zip” associated with such sources. I’d like to see it scrubbed up and looking fresher but I imagine I might be in a for a long wait. As movies go, this isn’t going to change anyone’s world, alter one’s perceptions of the genre or stimulate any intellectual debate. What it will do, however, is provide a pleasant evening’s entertainment. I liked it.