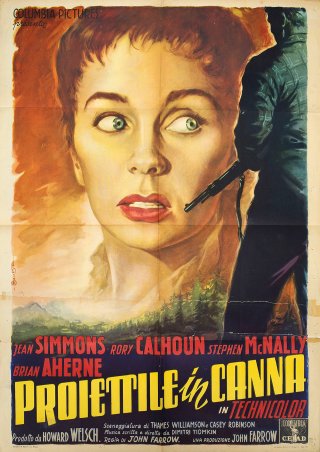 I’ve spoken of the importance of titles before, and I do like to see a punchy and enticing one used. A Bullet Is Waiting (1954) has a lot going for it: it promises suspense, danger and action, it raises questions in one’s mind and attracts the attention. Is it perhaps more than a little misleading though? In a sense it’s not, as it does allude to a very real fear motivating one of the leads. On the other hand, I know that when I first heard of it I had mental images of a western or a noir-shaded thriller. Yet that’s not really what ends up presented on the screen as it’s essentially a rustic melodrama with action/thriller elements backing up a tale of romance and renewal.

Openings that fling the viewer unapologetically into the very heart of the story can be hugely effective, and that’s what occurs with A Bullet Is Waiting. The first image is of boiling, surging waters, waves driven relentlessly by their own turmoil onto hard and unyielding rocks; this, backed by a characteristically muscular and dominant Dimitri Tiomkin score, signals an affair of heightened passions. As the camera moves around the detached wheel of a plane is visible at the edge of the swirling tide, and the tracking shot back inland reveals more wreckage and debris littering the shore, seguing gradually into footprints gouged frantically in the sand. And then, at the crest of a hillock, two figures loom into view struggling against and pummeling each other in desperation. They are Ed Stone (Rory Calhoun) and Frank Munson (Stephen McNally), fugitive and pursuer respectively, quite literally locked in combat since they are shackled together at this point. Stone gains the upper hand, releases himself and sets off alone. It’s a temporary separation though and these two antagonists are soon to be reunited when they stumble  onto private property. Cally Canham (Jean Simmons) is a young woman who has been living an isolated existence with only her reclusive father (Brian Aherne), and her loyal sheepdog, for company. With her father away for a few days, neither Cally nor the two survivors of the plane wreck particularly want to be holed up together in her cabin. However, a prolonged and dramatic storm leads to flooding that cuts off all possible escape routes, and forces these disparate characters to contemplate those timeless adversaries: retribution or redemption. By the time Cally’s father returns a number of truths will have been laid bare and paths chosen. 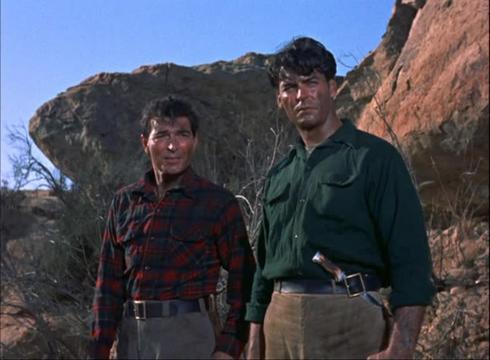 Now this is by no means a perfect movie, there are weaknesses which I’ll address later, but it has quite a lot going for it. Director John Farrow starts out with that wonderfully cinematic opening sequence I’ve spoken about and manages to steer a fairly even course throughout, avoiding the trap of letting it get too talky, even when the plot drifts toward some philosophical musing. That philosophy – espoused on screen by Aherne and represented by his withdrawal from a modern world he sees as increasingly dominated by confusion and conflict – is actually dealt with more subtly within the framework of the plot.  Personally, I see it as a variation on the classic redemption theme by focusing on the restorative powers of nature. From the primal power of the storm to Franz Planer’s beautiful photography of the pastoral scenes, and on to the soothing effect of the sheepdog and the lamb on the frayed emotions of the characters, the influence of nature and its ability to effect renewal is never far below the surface.

As I noted though, there are weaknesses here, which ought to be mentioned. Firstly, I see the redemptive strand having  a dual focus, on the characters of both Calhoun and McNally, the need for its application to the latter emerging only gradually. By the end this is seen to have been achieved, but in one case it was never in serious doubt anyway whereas in the other something is lost, in my view at least, by the abruptness with which it occurs. Any picture that embraces the concept of redemption and/or renewal is always welcome with me but I have to say I prefer it when the road which leads there feels a little longer, or when the battle is harder fought; in A Bullet Is Waiting it, and indeed the ending itself, arrives with something approaching alacrity. I’ve talked a lot about both Calhoun and McNally on this site in the past so I’ll simply say that both men turn in typically strong work, with the former’s innate likeability and the latter’s knack for tapping into ambiguity to the fore. Brian Aherne’s presence is felt from early on through his influence on his daughter’s thinking and character but he only makes an appearance in the final third. He brings a lovely sense of quiet authority and civility to his role. I liked him in Hitchcock’s I Confess and I must try to feature some more of his work in due course. 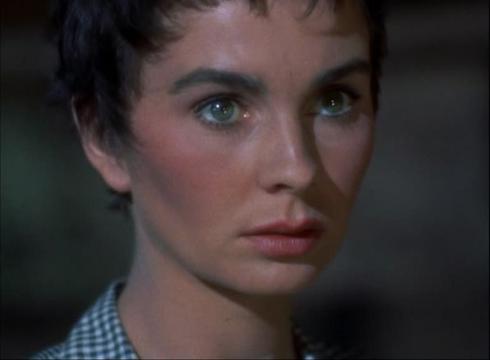 However, the real star of A Bullet Is Waiting is Jean Simmons. She had a good deal of range, her deranged beauty in Angel Face remains a remarkable piece of screen acting and contrasts with the delicate innocence she displays here. Her slow awakening and realization of the possibilities existing outside her cloistered existence is well done; the image of her sitting in her modest bedroom, leafing through her book on ballet, the little toy ballerina turning pirouettes within its own  protective yet restrictive space, as she tries to find some common ground with Calhoun’s roughneck is just impossibly charming.

A Bullet Is Waiting was put out as a manufactured on demand DVD in the US by Sony and it’s also available in a number of European editions. Generally, the image is pleasing with Planer’s Technicolor cinematography looking particularly fine. I see that the movie is categorized as a film noir by both IMDb and Wikipedia but, even as one who tends toward an inclusive interpretation, I don’t feel that it should be applied in this case. All told, despite a somewhat rushed ending, I found this to be an enjoyable and rewarding watch. It’s one I’ll be returning to.

110 thoughts on “A Bullet Is Waiting” 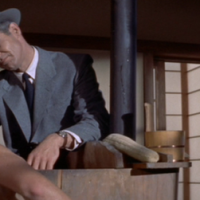 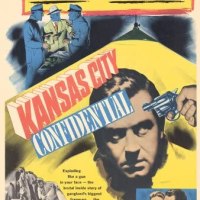 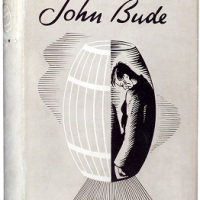 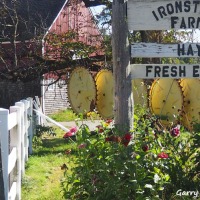 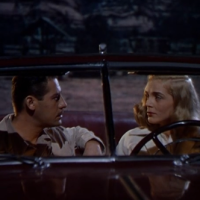 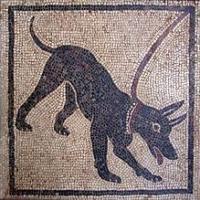 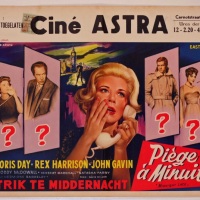 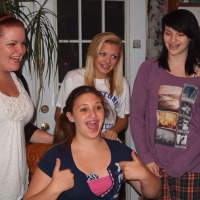