Doing the right thing – a trite phrase in some respects, and yet it also goes straight to the heart of the personal dilemmas which form the basis of and indeed drive so many dramatic works. Ultimately, what does it mean to “do the right thing”, or to “go noble” as one of the characters in Mogambo (1953) puts it? Isn’t this just one aspect of our human condition, that perennial struggle for primacy between head and heart? Of course there’s an argument to be made that neither head nor heart can act entirely independently, and perhaps the way this movie resolves the internal conflicts which confront its characters is a reflection of that.

The notion of the fish out of water is a useful and much used dramatic device and whole movies have been hung on this particular peg. Nevertheless, it can be a tiresome conceit if the filmmaker decides to rely on it alone. John Ford was nothing if not a great artist and therefore had the wisdom to know that while this could act as a hook initially, far more substantial morsels were necessary to build a story around. So it is that Eloise Kelly (Ava Gardner) is introduced, turning up in the East African bush where the sass and sex appeal of Manhattan are of, let’s say, limited effect. It appears she has been stood up in style by a high class date, and the philosophical way she accepts this suggests that she’s no stranger to such setbacks. Stranded in an alien environment, with no way out till the next boat arrives in a week’s time, she decides to make the best of it. Making the best of it includes trying to find something useful to do and hopefully avoiding the censure of her grudging host, game trapper Vic Marswell (Clark Gable). Nature has a habit of taking its course in even the most civilized and sophisticated of settings so it ought to come as no surprise when wilder climes hurry that process along a little. To cut to the chase, Kelly and Marswell embark on a brief affair, but only one of them is looking any further at this stage. When the supply boat arrives it brings a couple of green innocents on a scientific expedition, and signals an abrupt end to Kelly’s dreams. The young couple are the Nordleys, Donald (Donald Sinden) and his wife Linda (Grace Kelly), and it won’t be long before Marswell’s eye is roving once more. However, it would be a dull and disappointing business if that’s all there were to it; either the tides of the river or maybe the more persuasive tides of fate see the old steamboat run aground and an unexpected reunion effected.

The consensus view on remakes seems to be that they are rarely a patch on the originals. Whether or not one subscribes to that approach, it’s generally advisable to assess everything on its own merits. Mogambo is a reworking of the 1932 movie Red Dust, which also featured a young Clark Gable in the lead. Even though it’s been many years since I viewed the original I feel secure in my view that Ford’s retread is by far the better film. Of course the fact that it’s Ford’s hand guiding it makes all the difference. His little quiet touches, his grace notes, are everywhere; from the resigned drop of Gardner’s head as she watches Gable walk off to greet his new clients, to the way Gable himself contemplates his smouldering cigarette as his own chances dwindle correspondingly. There is too the seamless blending of landscape and environment into the narrative, with key moments played out against the backdrop of moonlit lakes and waterfalls. Mogambo was made in the middle of a run of movies for Ford where this professed “director of westerns” avoided the genre with which his name has been so closely linked. From Rio Grande in 1950 until The Searchers in 1956 he didn’t touch westerns, but there remains something of the spirit of that genre on show here. Ford was always drawn to the intimacy of frontier living, the  minutiae of existence of those living on the edge of civilization, particularly in the Cavalry trilogy. Mogambo recreates some of that in the comfortable and companionable remoteness of Marswell’s lodge, while the beauty and hazards of the wilderness become apparent as the safari gets underway. And underpinning it all is the threat to existential connectedness, the essential symbiosis that links everything, which is posed by the arrival of the civilized Nordleys; this is quietly underscored by the frustration felt by Gable when he finds himself forced to kill animals on two separate occasions in order to save the lives of these two interlopers.

In addition to Ford’s motifs and sensibility, a more mature and experienced Gable adds another dimension to the movie. There is that gruff individualism that he so often traded on but it’s tempered somewhat by his playing a man who has lived too long in isolation, detached from emotional connections and therefore able to bond freely only on the most superficial levels. Still, those extra years add depth to his portrayal, the passage of time, or his awareness of it at least, seem to give a greater urgency to his character’s hunger, that knowledge of the need to grasp whatever opportunities come his way before it’s too late. In fact, as the story unfolds it is possible to read the internal conflict he’s experiencing, that head and heart business again, where he’s forever trying to balance some yearning for fulfillment against his personal code of ethics. In so doing, he runs the risk of losing the greater prize. 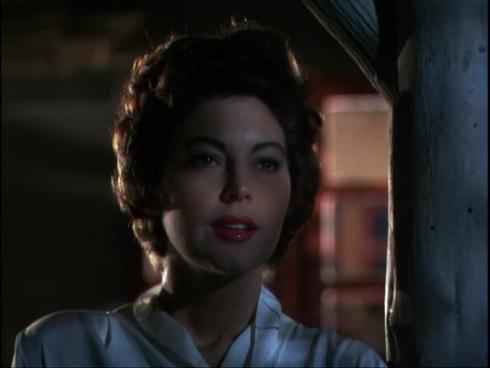 When all is said and done, the movie really belongs to Ava Gardner. Gable was top billed and, as I’ve said, he does excellent work, but the screen genuinely sparkles whenever Gardner is there. She is the main driver of events and acts as the emotional core. It’s a superb performance by an actress at the very top of her game and the height of her allure – I’ve been delving into that purple patch she struck in the mid 1950s after having recently enjoyed a rewatch of The Sun Also Rises. This was her third time playing opposite Gable, after The Hucksters and the extremely disappointing Lone Star, and it’s far and away the best of their collaborations. Her role played to her strengths, her earthy free-spirited sensuality is always to the fore, but also presented her with more subtle challenges. An example of this is the way she gets across very clearly the illusory nature of her free and easy demeanor. There’s a beautifully telling moment just after she embarks on the steamer where she’s pacing back and forth on the deck in front of a cage containing a captured leopard, the animal inside mirroring her moves. It’s evident that Gardner is trapped too, confined in life by the limited choices available to her. Despite this, she remains the most positive aspect of the movie, representing Gable’s chance for redemption and fulfillment – she is the siren whose song doesn’t lure a man to his doom but instead leads him toward salvation.

Grace Kelly had just come off High Noon but her biggest and most famous roles were still ahead of her. Her character is immature, a girl playing at being a woman, self-centered and plagued by indecision. Kelly nails the breathlessness and deception but is limited somewhat by the one dimensional nature of the role. Donald Sinden has the rather thankless part of the cuckold but does elicit sympathy due to his forthrightness and inherent dignity. Further support is provided by Philip Stainton as Gable’s plummy-voiced friend, Eric Pohlmann as a lazy and vulgar drunk, and a quiet Denis O’Dea, whose wordless confessional scene with Gardner provides another of those delightfully Fordian grace notes.

To the best of my knowledge, Mogambo has still not had a Blu-ray release. The old DVD has been around for many years now and is pretty solid, though this is the kind of movie which could look spectacular with a bit of a cleanup and a HD upgrade. It may not rank among John Ford’s more celebrated films but it’s long been a favorite of mine and one I am always keen to recommend.