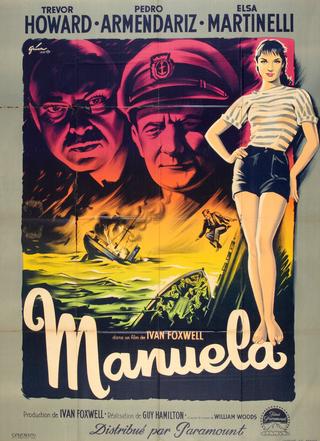 Movies which play out for the most part in confined spaces typically generate tension, the limited options available to the characters mirrored by their spatial restrictions. Another layer is added when the dramatic space involved is to be found on a vehicle, a train or a ship for instance. When this occurs the concept of a journey is naturally woven into the fabric of the drama. A journey is generally of interest in itself, even when approached on the simplest and most literal of terms, and that interest rises if it can be viewed as a metaphor for the characters’ progress through life. It is this spiritual or emotional journey which resides at the heart of Manuela (1957), a modest, self-contained and deeply satisfying work directed by Guy Hamilton in the years before Hollywood and the James Bond movies beckoned.

There’s nothing like a death to focus the mind on life, and that’s essentially what happens as this movies opens. The story is one of a ship and more particularly the master of that vessel. That opening has him setting off to lay his chief engineer to rest in the South American port where he has docked. The ship is a beaten up tramp freighter and its equally weathered and weary captain is James Prothero (Trevor Howard). He’s seen to be drifting into a dissatisfied and increasingly drunken middle age, commenting at one point on how the passage of the years has not only crept up on him but also caught him unawares, leaving him with that unwelcome sense that there is more time behind him than there is lying ahead. Yet despite his conviction that he’s teetering on the brink of a bitter autumn, events are about to take a wholly unexpected turn, one which will see him enjoying something of a late spring instead. Taking advantage  of the amorous and expansive nature of Maltese crew member Mario (Pedro Armendariz), a beautiful half English girl Manuela (Elsa Martinelli) inveigles her way on board as a stowaway. Her presence seems set to cause friction and does so initially but it’s her longer term effect on the jaded captain that drives the drama. As he experiences a renewed appetite for life, he becomes distracted from his duties, switching his attention to the course he’d like to see his life following as opposed to the potentially hazardous one his vessel is in the process of navigating. 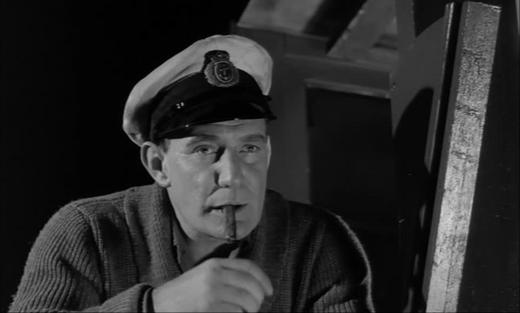 Guy Hamilton appears to have been a very polished man and that cool, worldly sophistication shows through in his movies. After serving an apprenticeship as assistant director under the likes of John Huston and Carol Reed, Hamilton went on to take charge of a number of well made British dramas including an adaptation of Priestley’s An Inspector Calls as well as The Intruder, a little known gem with Jack Hawkins. In Manuela everything revolves around priorities, or perhaps it’s more accurate to say the recognition of what they are; that and the fact it’s never too late to reassess and realign those priorities. While there is some very moody imagery via Otto Heller’s cinematography and a few quite dark moments, the overall tone of the movie is uplifting and optimistic. The story was filmed with two different endings – it’s an adaptation of a novel by William Woods, although not having read that I can’t say which one is more faithful to the source – and without going into details and spoilers I’ll just state that I vastly prefer the one used as the default for this release.

“… suddenly tonight, I saw myself growing old. And I didn’t like it. When you’re young you see the good days all ahead of you. Then suddenly you get older and catch sight of them behind you and wonder how in the devil’s name they got there.”

Trevor Howard had the lived in appearance that oozes character, his was a face and manner made for mature drama. The arc traced throughout this picture by Prothero is achieved skillfully and artfully. The bitterness and resignation of the first act is a brittle veneer that cracks completely with the arrival of the girl. What is revealed is a soul not yet aged irreversibly but hungry to taste hope once again. Of course for this kind of reawakening to make any sense, or have any credibility, it’s vital to have the right person providing the impetus. A young Elsa Martinelli easily fits that bill, exuding attraction and a frank charm. While those two are at the heart of the drama it’s also important to acknowledge the contribution of Pedro Armendariz. His role is a complex one, a figure of ebullience and menace too, a dangerous romantic with a dark side and generous heart, a braggart who is simultaneously a confessor. In support we get a number of familiar faces and talented figures from British cinema. Donald Pleasence has a sizeable role as a repressed and ultimately mean-spirited officer, one of those professional and spiritual zealots he excelled at playing. Other notables are Jack MacGowran, Warren Mitchell and Roger Delgado. 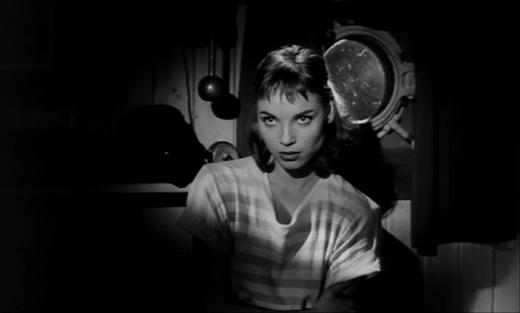 Blind buying movies can be a bit of a gamble and there’s no doubt that it doesn’t always pay off. However, an interesting cast and/or crew as well as an eye-catching piece of poster art will often get this viewer’s attention. Manuela was one of those blind buys when it showed up at a knockdown price in one of Network’s regular sales a few years ago. From a purely technical standpoint, it’s a terrific looking DVD with a sharp, smooth 1.66:1 image. I liked the fact the disc offered the alternative ending as an bonus feature. Apparently, different endings were used for the UK and overseas releases (according to IMDb at any rate) and I’m unsure which one is the default on the DVD – the UK one, presumably. This was a movie I viewed with absolutely no prior knowledge and consequently no particular expectations. Admittedly, there are a few inconsistencies in the script and some loose ends which are left untied. Nevertheless, I found it all a highly enjoyable experience and it’s a title I’m happy to recommend.

Edit: The movie was released in the US under the alternative title Stowaway Girl.