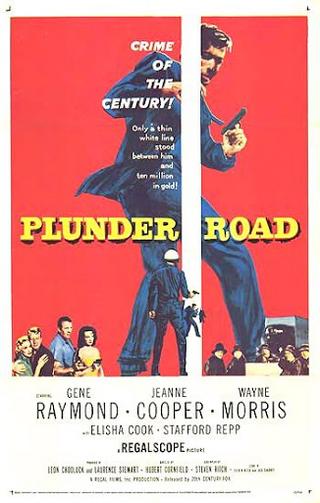 The above quote seems as good a summation as any of the thinking behind Plunder Road (1957), a late entry in the classic film noir cycle and a lean, streamlined one at that. Any fan of pared down, low budget filmmaking ought to find much to appreciate here in the simplicity of the narrative and the clean, uncluttered technique. The movie provides an object lesson in how to be economical without becoming cheap and how to take a sparse, minimalist approach to storytelling without sacrificing the engagement and involvement of the viewer.

If you’ll excuse the pun, this is a driving movie in every way. It opens in that breathless style that leaves one in no doubt regarding its urgency. The credits are punched up on screen as the white lines of an anonymous highway hurtle by below. The filmmakers are clearly in a hurry to get to the point, and as the camera moves into the interior of the vehicles it’s abundantly clear that the characters presented to us are just as conscious of the need for haste. There are five men in two trucks and they are racing through the rain and the darkness, racing to catch a train. Eddie (Gene Raymond) is the brains of the outfit, the mastermind behind a plan to lift millions in bullion from a late night train. They’re running late and he’s worried, though the guys in the back of the truck, a hooligan (Wayne Morris) and a explosives man (Elisha Cook Jr), are probably even more tense, sitting either side of a precarious looking contraption supporting a vial of nitroglycerine or some other highly volatile substance. Despite the inclement weather and the rush, the heist is a success, and then a new race is on. Perhaps it’s actually two races, that of the gang to make good their escape with the loot and that of the largely faceless authorities to lay them by the heels before they have the chance of slipping out of the country.

Director Hubert Cornfield has an extremely brief list of credits to his name but Plunder Road is the only one of his movies I’ve seen so far. As such, I’m not in a position to comment on whether or not it’s representative of his work. What I can say, however, is that this is one stylish dynamo of a picture. That  pacy beginning segues into a heist sequence that is fabulously smooth in its execution and  memorable in its visuals; the rain, the masks and the clockwork precision of it all shot in a spare yet evocative manner by Ernest Haller. From this point on the tension never lets up, the gang now attempting to put into practice the crucial getaway their laconic leader has mapped out. Any connoisseur of the heist movie will know that a big part of their success derives from observing how even the most tightly woven and seemingly foolproof of schemes can slowly unravel, with the pressure generally coming from within rather than without. Plunder Road follows such a formula, but avoids descending into cliché as it does so. This is partly due to the “shape” of the narrative moving in what might appear to be a reversal of the usual noir route; it goes from darkness, confusion and turbulence towards the light, the ending deceptively bright and sunny, everyday and bland. Bleak and bland. That’s part of it, the other part is the characterization.

What we get in Plunder Road are thumbnails, brief sketches that highlight a few prominent or significant features. A more lavish budget might have led to flashbacks, a wider cast and maybe parallel storylines to add apparent depth, but I doubt the end result would be any more effective. Narrative padding tends to be irritating, inflating the running time unnecessarily and damaging the rhythm. Here we learn only the essentials about the characters and this is typically communicated via snatches of throwaway conversation. The point here is that this minimalist writing style works, and it works by telling us enough about the characters to catch a glimpse of who they are,  and who they were, almost without us being aware of it. And it’s just enough to humanize them, to make the viewer interested in them, to care.

Gene Raymond had top billing as the planner, and what is learned about him? Surprisingly little beyond the fact he’s supposed to be a first timer, a man without a criminal past and therefore an object of curiosity. All that’s really revealed is his skill in logistics and, crucially, his relationship with Jeanne Cooper. Those two people are essentially defined inside the movie by this relationship, both of them acting as they do as a result of their devotion to the other. Steven Ritch wrote the movie and also played the part of the expert driver, a twitchy, hot-tempered type who blew a promising career and is now desperate for a big score. Stafford Repp was a few years off becoming Chief O’Hara in Batman but makes an impression as the dead-eyed but careless gum chewer who proves to be the first weak link in the chain. Elisha Cook Jr displays, perhaps unsurprisingly, more pathos than anyone else. His widower who hopes to secure a privileged, comfortable future for his son and himself in Rio is the very epitome of naivety. Finally, there is Wayne Morris as a former stuntman; tough and detached, here’s a man who depends on his muscles more than his brain. The pivotal scene at the gas station, where he first elicits sympathy from the viewer through his casual chat with the elderly attendant before flipping the whole thing in the blink of an eye after he makes the  kind of error that cannot be ignored, shows him at his best. That scene, on a number of levels, is the most tragic and affecting in the entire movie.

Plunder Road was released on both Blu-ray and DVD in the US some years ago by Olive Films. The black and white Scope image looks excellent and there are no noticeable flaws. This is a fine movie which benefits from tight scripting and sharp cinematography and direction. The precision of the heist is classic thriller material and  having each character’s downfall stem from their own unique traits  is pure film noir – the notion that everyone is in effect his own nemesis is a dark thought indeed. This is a movie which retains freshness even after multiple viewings and is therefore an easy recommendation, something especially true for those who have yet to see it.