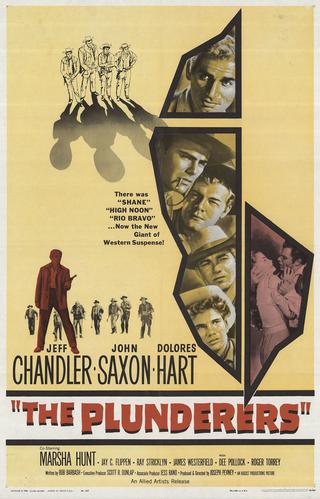 A new decade heralds change, or at least that would appear to be the received wisdom. It’s tempting to see it like Janus, as a point of transition gazing both ahead and back simultaneously. And no, this isn’t going to turn into some reflection on where we find ourselves today; it’s merely a coincidence that I happened to look at a movie which also appeared at the beginning of a new decade. The Plunderers (1960) came out just as the the western was about to enter a period of significant change. Could it be termed a transitional work? Well, for my money, it has much more in common with the works which preceded it, although perhaps there is a case to be made for it taking some tentative steps towards the post-classical era.

So, what’s it about? Conflict is naturally the key element of all drama and this movie presents it on a number of levels – interpersonal, intrapersonal and generational. On the surface, it’s a simple tale of four youthful drifters arriving in a tired and washed-up town, a place where all vigor has been abandoned and where the ageing population is unprepared for any challenge to the torpid complacency. These four are restless and dissatisfied, wearied from a cattle drive and emotionally raw at the realization that they just blew all their earnings in a week of indulgence in Dodge City. Right on the cusp of manhood, these youngsters need to reassert themselves, to make people sit up and take notice of their importance, but are singularly lacking in the maturity necessary to acquire that which they most desire, the respect of others. Thus, when an initial bit of minor roguery and mischief leads to the mildest of rebukes, their bravado is further stoked. It all leads up to threats, murder and, finally, a confrontation with a one-armed veteran, provoking a spiritual awakening of sorts. 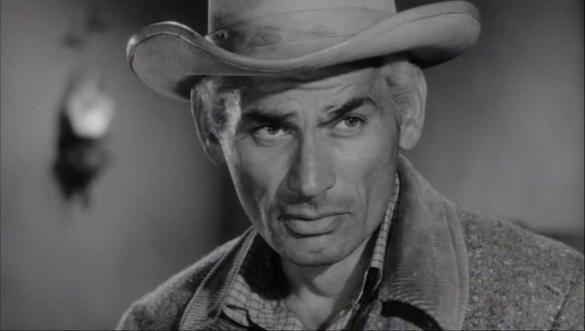 There’s a lot going on here. We have the four interlopers trying to find their place in the world, but without the structure and guidance to point them in the right direction. This appears to be a throwback to the tales of rebellious youth that abounded in the previous decade, but the crucial difference here is that those earlier examples tended to push an essentially optimistic message whereas The Plunderers has an altogether sourer vision – the generational conflict depicted promises no positive outcome. Maybe this can be seen as a reflection of the stagnation that would begin to creep into the genre and give rise to a new and more nihilistic approach.  Or from a wider sociopolitical perspective it might be seen as holding up a mirror to the waning of the somewhat detached Eisenhower era which was about to give way to the more radical and energetic Kennedy years. Then again, I may well be trying to read too much into it all.

What is certain is that the movie charts the gradual reawakening of the conscience and sense of responsibility of its leading character. Jeff Chandler puts in a fine, understated performance as the  veteran who has been scarred both physically and psychologically by his wartime experiences. The fighting robbed him of the use of an arm and left him an emotional cripple as well. His withdrawal from his community is partnered by his distancing himself from his former lover (Marsha Hunt, happily still going strong at 102), and her needling of him for his lack of guts almost constitutes an assault on his masculinity. It feels as though his passivity and apparent impotence is being weaponized in both a literal as well as a figurative sense. What finally rouses him to action is the belief of the storekeeper’s young daughter (Dolores Hart). There is the suggestion that he has lost confidence in himself as a result of his injuries yet I think it’s clear enough that his fear is not based on an absence of self-belief as much as a reluctance to revert to the violence that he earned a fearsome reputation for indulging in during the war. While the classic 50s western built towards a spiritual rebirth, I think it’s telling that The Plunderers ends on a grimmer note with its emphasis on guilt and an inner monologue that’s actually a prayer for forgiveness. 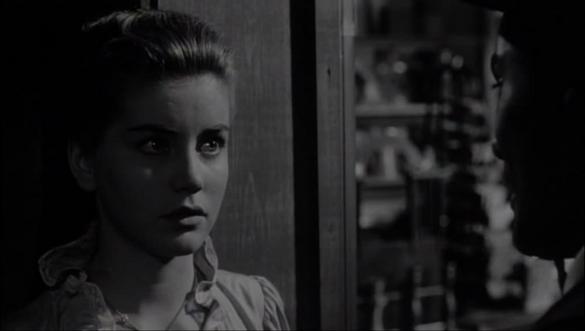 Bit by bit, I’m getting round to featuring works by a variety of filmmakers who really ought to have been represented on this site earlier. Today it’s the turn of Joseph Pevney, an actor turned director who made a number of impressive genre movies throughout the 1950s before moving on to a long a successful career on television. The Plunderers was one of his last feature efforts and I think it’s a strong one. Almost the entire picture is shot within the confines of the town, keeping our attention focused and the dramatic tension ratcheted up. It’s very obviously a low budget affair, but Pevney’s interesting camera placements, along with the layered writing, help make a virtue of this. I feel it’s also refreshing to see the climactic duel making use of knives as opposed to the more traditional quickly-drawn pistols. All told, there is little on screen violence until quite late in the story – with  the exception of two tough and rather brutal beatings – and when it does take place it’s appropriately shocking in its abruptness and tragedy.

As far as options for anyone wishing to view this movie are concerned, there’s a manufactured on demand DVD available from the US via the Warner Archive and there had until recently been a release in Germany, but the latter seems to have gone out of print now. I’m an unashamed fan of low budget movies that punch well above their weight and I actively seek these out. Sometimes they work out fine and at other times they don’t; happily on this occasion, I felt The Plunderers was a success and I recommend checking it out. In fact, I enjoyed Pevney’s work so much here that I’m of a mind to feature a few more of his movies back to back. We’ll see…

21 thoughts on “The Plunderers”