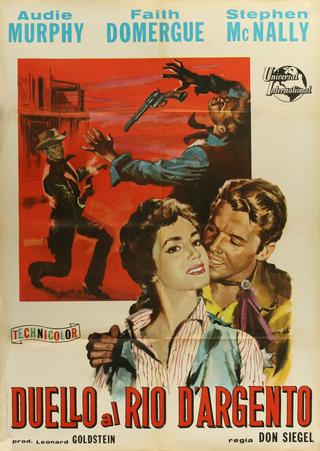 Pulp, a word that usually ends up being employed in a derogatory way. It suggests the cheap, the disposable, and that sense of something a bit crude and tawdry is never far from the surface. It carries around the sour taste  of intellectual snobbery, a self-aware superiority that drains the  joy from entertainment. But, let’s not forget that entertainment and art are under no obligation to remain stand-offish strangers. Frankly, I like pulp material and always have, long before I became aware of the negative connotations assigned to the term by some, or was even aware of the term itself for that matter. As with so many other forms of artistic expression, it worked its way into my consciousness from an early age, entrancing and enchanting an eager mind. In short, this is where the seeds of my lifelong affection for cinema, literature and countless other art forms was first sown. And so to the The Duel at Silver Creek (1952), a film that is unashamedly and satisfyingly pulpy.

The story is a simple one, telling a tale of claim jumpers, manipulation and revenge. The bulk of the action takes place in and around the titular town of Silver Creek, where the villains have set up an outwardly respectable front. The town is served by a lawman going by the colorful name of “Lightning” Tyrone (Stephen McNally), renowned for his speed with a gun but hampered by an injury following a run-in with the aforementioned criminals. The murder of a friend adds a personal element to the marshal’s motivations, and this hunger for a reckoning is shared by his newly acquired ally, a youthful gambler and gunman known as The Silver Kid (Audie Murphy). The efforts of these two to chase down the claim jumpers forms the basis of the plot but it all gets a little more complicated when a layer of romance and intrigue appears in the shape of Opal Lacy (Faith Domergue), a particularly devious addition to the limited but frequently impressive roster of western femme fatales. 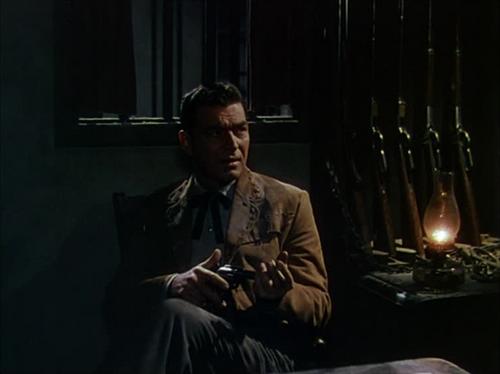 There are a number of things which jump out at you while watching this movie. Firstly, it’s a Universal-International production so it has the distinctive and unmistakable look that can be found in all of the studio’s output of that era. The Technicolor cinematography of Irving Glassberg is quite beautiful at times, and the shadowy nighttime interiors are rendered in an especially attractive and evocative way. It’s in these moments that a film noir flavor is most noticeable, and that aspect is highlighted both by the intermittent voiceover provided by McNally and the calculated and ruthless machinations of Domergue. Then there are the character names – Lightning Tyrone, The Silver Kid, Johnny Sombrero, Dusty Fargo, Tinhorn Burgess, Rat Face Blake, etc – carrying that unreal yet alluring quality of something ripped from a comic strip. Presiding over all this is Don Siegel, a man still learning his trade at this stage – the pacing is a little off in the second act – but already  showing the visual economy that can be found in his best work.

With a plot-driven, action-oriented piece of filmmaking the characterization is always going to come in a very distant second place. Audie Murphy and Stephen McNally were highly capable actors, the former still on the learning curve but growing in confidence all the time while the latter was an experienced and solid second lead/support man. Seeing the names of Murphy or McNally in the credits generally means a movie is worth watching, in my opinion. Neither one is asked to stretch himself particularly here in pretty one-dimensional roles, but they never offer less than good value. Even though I wouldn’t call myself a  great fan of Faith Domergue, I’ll freely admit she did fit the femme fatale mold quite snugly and she vamps very successfully in this part. Susan Cabot is cast in a tomboyish part which, while attractive enough in its own way, feels like a bit of a waste. I think the main weakness though comes from the rather insipid bad guys. While Domergue’s flashiness was always going to overshadow them Gerald Mohr and Eugene Iglesias don’t provide much of a threat to compensate. On the other hand, Lee Marvin does make a definite impression as a loudmouthed townsman in one of his earliest roles. 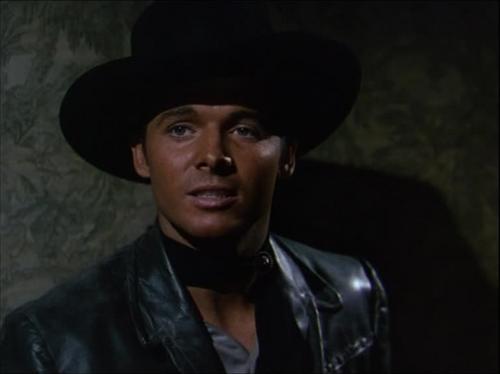 Looking around at what is available for viewing nowadays, it has to be said that fans of classic westerns have much to grateful for. The vast majority of Audie Murphy’s movies are now accessible in good to excellent quality – a handful are still only viewable via sub-par editions – although it doesn’t seem all that long ago that The Duel at Silver Creek was one of the few that could be picked up easily. I don’t believe it’s been upgraded to Hi-Def but it still looks good to my eyes. If the film isn’t going to offer any new insights, it has to be said it still provides a powerfully enjoyable way to pass an hour and a quarter, which is never a bad thing. That, I feel, is as good a way as any to round off 2019 and to wish everyone a happy, fulfilling and successful 2020.

34 thoughts on “The Duel at Silver Creek”