The present is made up of little bits of the past.

Recently, I spoke a little about filmmakers venturing outside of their perceived comfort zone and the how the ability to do so successfully can be taken as an indication of their artistic skill. The classic era of Hollywood moviemaking could be seen as a factory environment which encouraged specialization among performers, writers and directors. I say could because it’s not really the case at all and once one looks beyond a handful of headline titles it’s an assertion that rarely stands up to any scrutiny. Even the unsung journeymen were afforded the opportunity to try their hand at a range of genre pictures. I think the better or more interesting directors understood the challenge presented by these opportunities, that the form and conventions of genre (that frequently maligned term) could be adopted, applied or discarded as appropriate in the pursuit of their art. It’s easy to look at the films of Robert Aldrich and decide he was simply a classy purveyor of tough cynicism, and indeed I’ve been guilty of doing so myself in the past. However, I’d like to think that the years bring us if not exactly wisdom then at least a broader critical perspective. So in that spirit, let’s look at Autumn Leaves (1956), a superficially atypical offering from one of cinema’s great talents.

The story opens with Millie Wetherby (Joan Crawford) hard at work. She spends her days in her neat bungalow typing up manuscripts for writers, putting the finishing touches to the experiences and adventures of others, a vicarious existence if ever there was one. Her life is a mundane one, and a lonely one at that. When a satisfied customer passes on a couple of concert tickets he doesn’t need she accepts them and decides to treat herself to a rare evening out. A brief flashback sequence triggered by the familiar music makes it plain that Millie’s solitary life is the result of sacrifices she made to care for an ailing parent, that time and opportunity just passed her by. And yet her walk home takes her past a small eatery, a place that catches her eye for no special reason other than a reluctance to let the evening end. Still, taking those tickets and yielding to that impulse to stop off for a bite to eat before returning to the empty home prove to be pivotal moments in this humdrum and inconsequential life. As she sits alone in her booth, prim and composed, listening to the movie’s title song on the jukebox the shadow of a wistful smile plays across her features. Another shadow enters the frame at this point, another customer hoping to share some table space in the crowded restaurant. This is Burt Hanson (Cliff Robertson), a fresh-faced and talkative young man, one more soul adrift in the urban anonymity. Here we have the beginnings of a tentative and rather sweet romance, a predictable setup in many ways. Yet the tone and direction alter radically in the second half as a far from attractive past barrels its way into the fragile present, and the threat to that fragility is what forms the basis of the drama which subsequently unfolds. 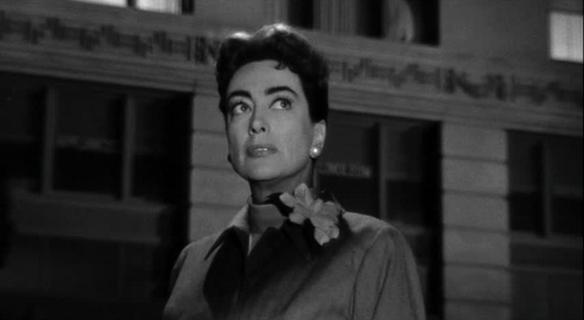 The cinema of the 1950s is an endlessly fascinating subject for this viewer. There are of course the technical advances which were ongoing and literally changing the shape of the movies, but it’s the thematic probing that seems to characterize this decade of filmmaking which intrigues me most. The promise and potential, the surface gloss of this brave new post-war world seemed to offer so much food for artistic contemplation. Time and again we encounter the notion of rebirth and renewal in 50s cinema, and indeed the characters played by Crawford and Sheppard Strudwick openly discuss the concept of being reborn in what is otherwise one of the more prosaic scenes in this picture. However, I’m of the opinion that reinvention is perhaps a more appropriate word to describe the central theme of Autumn Leaves. Millie certainly reinvents herself in the role of carer which she appears to have occupied all her life, although one might argue the ending does look to a future beyond that. Burt is without doubt the most obvious source of reinvention; he adopts and discards aspects of his past and present at the drop of a hat, unconsciously creating whatever reality feels expedient on any given occasion. Of course the consequent psychological meltdown and the road back from the mental abyss into which he descends is another part of that process.

So what can one say about Aldrich, and is there cynicism on view here? Well yes and no. If one takes the view that peering beyond the veils of society to get nearer the truth is cynicism, then perhaps Aldrich can be said to be a cynic. I’m not sure that is the case though; for one thing cynicism suggests a sourness, particularly on a personal level. As I see it, Aldrich wasn’t going down that route. On the contrary, I see a man casting a sidelong glance at society on an institutional level, almost like a more abrasive version of Douglas Sirk. Unlike Sirk’s more sumptuous, glossy presentation of a flawed idyll, Aldrich’s visual approach is starker and more direct with Charles Lang’s noir-shaded cinematography and the canted angles and mise-en-scène emphasizing the narrow range of options open to his trapped and tormented characters. 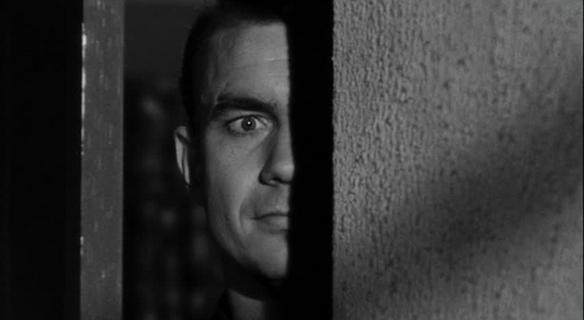 Joan Crawford’s career on screen could be separated into distinct eras, with Autumn Leaves coming close to the end of a very successful run starting with Mildred Pierce. Her role as Millie Wetherby is a strong one and a good fit for her at this stage in her life and career. There’s an open acknowledgement of all the little (and not so little) insecurities that come with ageing. There are, as expected, a number of “big” moments but it’s actually some of the smaller, more intimate instances that stick in my mind, that early scene in the restaurant for example, or some of the exchanges with Ruth Donnelly. Cliff Robertson landed a plum part as the deeply disturbed Burt and his handling of the character’s slow disintegration is well done, with vague hints dropped from early on and casual lies imparted before their enormity is finally revealed.

Both Vera Miles and Lorne Greene are fine too as the calculating ex-wife and the frankly sinister father respectively. I mentioned before Aldrich’s less than reverent view of institutions and his take on an appallingly dysfunctional family is deeply shocking. Miles’ glacial turn as the entitled and contemptuous ex is marvelously mean – leaving that cigarette smouldering in the ashtray in Crawford’s bungalow is a nice touch. And Greene is on top form as the bullying, creepy patriarch. If family is seen as representing the bedrock of society, the horrors implicit in Burt’s domestic background offers as withering a criticism of the post-war American Dream as one could imagine. In support, the aforementioned Ruth Donnelly is a joy every time she appears and there are small parts for Maxine Cooper (Velda from Kiss Me Deadly) and, as a gloriously jaded and world weary waitress, Marjorie Bennett.

Autumn Leaves is one of Robert Aldrich’s early films that seems to get much less attention than his other work from around that time. Frankly, it deserves better as all those involved give a good account of themselves, not to mention the fact the movie tackles a tricky subject with confidence. Rather than resort to dry cynicism, Aldrich takes an unflinching look at the process of decay in certain institutional pillars but reserves a cautious optimism for the individuals at the heart of his drama and for their simple hopes. And, last but by no means least, there’s Nat “King” Cole’s superb theme song: