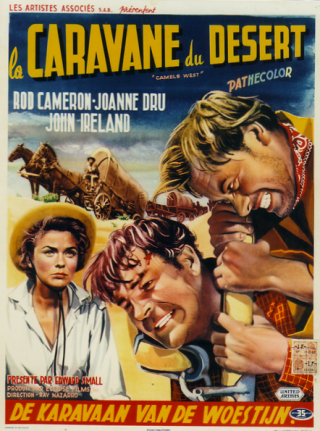 Southwest Passage (1954) is very much a product of its time. The end of the studio system and the growing competition from television saw Hollywood scrambling around to find some means of countering these threats. Promising greater spectacle and shooting movies in impressively wide ratios would eventually prove to be the most effective means of luring audiences back into the cinemas, but other approaches were tried out too. The 3-D process has always felt like a gimmick at heart to this viewer, and far too often saw filmmakers succumbing to the temptation to throw items at the camera to enhance the effect and elicit jumps from the bespectacled watchers. Southwest Passage has some of that self-consciousness on display, but goes a step further and presents a story with an unusual premise, namely the use of camels to forge a  new trail across the desert on the way to California and the west coast. This too gives the impression of writers casting round for as many hooks as possible to hang a fairly straightforward story on.

One thing this movie does not lack is pace and it gets off to a genuine flyer with a fired up and well armed posse hot on the heels of a trio of fugitive bank robbers. As horses and riders pound their away across the screen and across the wilderness, one of the pursuers pauses to take aim and loose off a speculative long-range shot. He finds the mark and one of the distant figures tumbles from the saddle. This unexpected casualty means a doctor is going to have to be located and, in brief, it provides the means by which the leader Clint McDonald (John Ireland) happens to bribe an alcoholic vet to hand over his identity and thus allow him to hide out as a member of an expedition heading west. It means he has to temporarily split up with his lover Lilly (Joanne Dru), but must needs and all that. The expedition this outlaw couple chance upon is no ordinary one; it’s being led by Edward Beale (Rod Cameron), a visionary type who has a theory that the hard desert crossing can be expedited by using camels rather than relying solely on mules and horses. As the party makes its way across the parched landscape the ever-present danger posed by the heat and lack of water is compounded by the tensions that bubble up within the group. This is partly down the need for McDonald to keep his true identity secret for as long as possible and also the fact Lilly is increasingly drawn to the selflessness and decency of Beale. To further complicate matters, a mean-spirited muleskinner (John Dehner) seems hell bent on stirring up trouble, while the Apache bands roaming the hills and rocks are just waiting for an opportunity to strike decisively.

The script by Harry Essex and Geoffrey Homes seems to be doggedly determined to dress up an essentially simple yarn of people rediscovering the path back to the straight and narrow via the hardships they endure in the course of a challenging trek. There’s a worthwhile parable in here about the way adversity can bring out the best in people, how even apparently lost souls can redeem themselves. In itself, that is enough to carry a picture and the cast is strong enough to make an audience care how or if this can be achieved. The added distraction of the camel expedition – and I’m firmly of the opinion that it is a distraction and nothing more – is wholly redundant and I have a hunch the writers realized this too as its impact on the development of the movie is slight in reality. Director Ray Nazarro was a journeyman, a competent professional who made (from what I have seen of his work anyway) entertaining but largely unremarkable pictures. Everything looks fine and he keeps it all humming along smoothly with a frequent smattering of action set pieces. These scenes are staged and shot well but, perhaps due to the faceless anonymity of the Apache warriors and their undefined motives, they do not deliver the level of tension I would have hoped for.

While he may not have had top billing, John Ireland’s character is by far the most interesting one on show. It is hinted early on that he isn’t merely a one-dimensional villain and the arc followed by this resourceful fugitive bears that out. By the end of the movie, you are rooting for him and want him to earn his salvation. Joanne Dru, his real life spouse at the time, not only looks good but she also makes for a feisty leading lady. She shoots at least as well as any of the men and doesn’t appear to have shied away from the more physically challenging aspects of the role. The way she plays that part and the gradual softening that occurs as the story progresses is key in coaxing Ireland back from the temptation of lawlessness and easy money.

If Dru was instrumental in facilitating or encouraging Ireland’s redemption, then Rod Cameron’s role could be said to have provided the motivation for rescuing her to begin with. Still, his is something of a thankless part, noble and steadfast and honest, but maybe he is too upright. Where Ireland’s conflicted robber and Dru’s disenchanted moll have nuance and shading, there’s none of that available to Cameron. He may be the lead and he may be the hero, and he plays both well and as written, but he winds up sidelined for all that. The real villain of the piece is played by the ever reliable John Dehner; sly, sleazy and spiteful, he wields a mean bullwhip and I only wish his role had been bigger still.

Southwest Passage is the type of movie which the producer seemed to throw everything bar the kitchen sink at, as though it was felt the core idea wasn’t strong enough. Personally, I take the opposite view and reckon that all the unnecessary embellishments detract from rather than enhance the finished product. All told, it is an entertaining way to pass an hour and a quarter but I do regret what I suspect was the lack of faith in the basic ingredients.