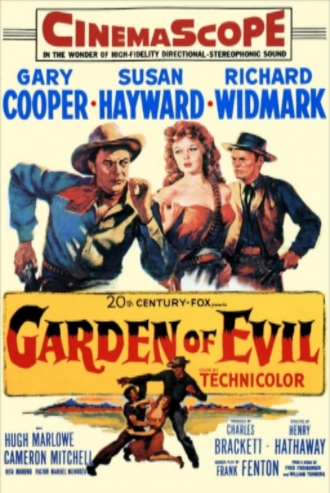 Look at her! Taking four men like us to a mountain of gold.

So says Richard Widmark’s Fisk, and in so doing he about sums up the plot of the movie. In a nutshell, a desperate woman (Susan Hayward) hires four men (Widmark, Gary Cooper, Cameron Mitchell and Victor Mendoza), who are all hanging around a dead-end Mexican town, to accompany her into the badlands on a mission of mercy; her husband is lying trapped in a mine deep in Apache country. What follows is an adventure tale that ties in some weighty themes such as, loyalty, greed, lust and infidelity. There are also some fairly explicit religious-moral allusions with the only features visible in a lava covered town being the church steeple and the entrance to the gold mine. Why, there’s even a crucifixion!

However, the film is never heavy-going and there is more than enough action to satisfy genre fans. The climactic chase and battle with the Apache is especially well-handled by veteran director Henry Hathaway. In fact, the whole thing moves along at a good pace and, at a little over an hour and a half, never outstays its welcome.

I love these early scope films from Fox, and this a great looking picture. Hathaway makes fine use of the widescreen process to show off the Mexican locations; some of the photography on the high mountain pass is simply stunning. The score is a bit of an unexpected one, by Bernard Herrmann no less. Herrmann, being Hitchcock’s composer of choice, is not a name you’d automatically associate with westerns. Nevertheless, the combination of soaring and ominous tones fits the mood of this movie perfectly.

There is, though, one very odd aspect to this film. Now, I won’t claim to be highly knowledgable of American Indians but the Apache we see here are the strangest looking bunch I’ve ever come across – surely the Apache never had Mohican haircuts!

That aside, I highly recommend this movie. How can you not love a western with Gary Cooper and Richard Widmark. I think both men give excellent performances, although I may be a little biased since I’m a huge fan of Coop. He gets to deliver the last line of the film while squinting into the sunset –

The garden of evil – if the earth was made of gold, I guess men would die for a handful of dirt.

8 thoughts on “Garden of Evil” 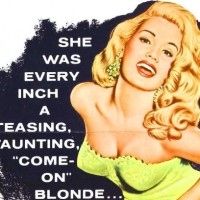 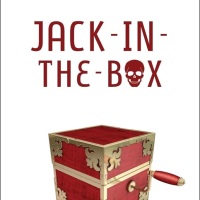