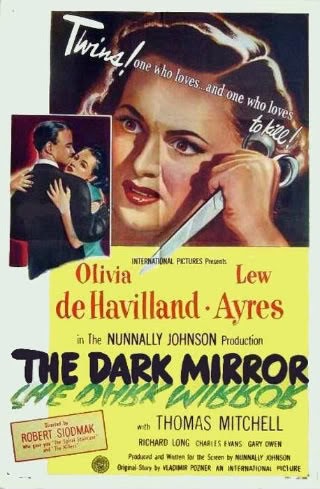 The 1940s saw a run of movies that attempted to cash in on the craze for psychoanalysis. Probably the most prominent among these was Hitchcock’s Spellbound, but there was no shortage of imitators (there was even an entire series based on this premise, namely Columbia’s Crime Doctor pictures starring Warner Baxter). Generally, such films used large dollops of cod Freudian psycho-babble to simultaneously jazz up and lend a touch of gravitas to the plot. Robert Siodmak’s The Dark Mirror (1946) is one of the more successful efforts, helped largely by an outstanding central performance from Olivia de Havilland.

The Dark Mirror is basically a murder mystery that uses the gimmick of having a crime committed by one of a pair of identical twins – the problem for the authorities (and the audience) is working out which one did the deed, and how to prove it. The opening shot is of the apartment of the victim with the corpse lying sprawled before a symbolically broken mirror. At first the case seems clear cut as the detective in charge, Lt. Stevenson (Thomas Mitchell), has witnesses that can easily identify the woman seen leaving the scene of the crime. Well, we’d be looking at a pretty short movie if that’s all there were to it. The problem is that the woman in question is either Terry or Ruth Collins (Olivia de Havilland), one of whom has a cast iron alibi for the evening – but which one? With the official investigation grinding to a halt due to the impossibility of the circumstances, Stevenson turns to analyst Dr. Elliott (Lew Ayres) for help. Elliott agrees to undertake a private examination of the twins to try and discover which one has the psychological profile consistent with a murderess. In so doing he utilizes all the recognisable tools of the trade from ink blots and free association through to a polygraph. Although he satisfies himself as to which sister is the most likely culprit, the proof remains stubbornly elusive. What complicates the situation even further is the fact that Elliott finds himself becoming increasingly attracted to the “good” sister while the other jealously works behind the scenes to undermine her sibling’s sanity. 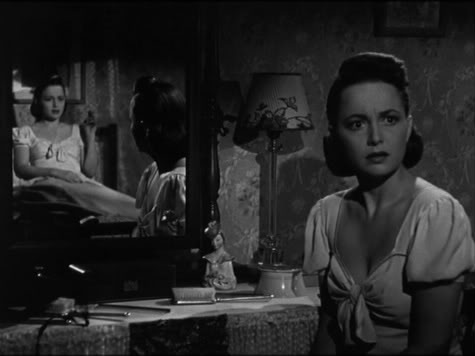 From a purely technical point of view the illusion of having the same actress playing scenes in a dual role works extremely well. One scene in particular called for one of the twins to sit next to the other and rest her head on her sister’s shoulder, and it’s a compliment to the film’s level of technical accomplishment that this effect is carried off so believably. Personally, I was really only aware that I was watching process work in one slightly ropey shot late in the movie where one sister addressed the other, who was positioned behind her, via an artificial looking mirror setup. Aside from this, Siodmak’s direction is assured throughout, and he wraps the whole thing up in a tight and pacy 82 minutes (PAL). As I said at the beginning, Olivia de Havilland’s performance is one of this film’s great strengths. It’s no mean feat to play twins with markedly different characters and remain convincing, but she managed it with aplomb. Thomas Mitchell’s cop is there to help ground the story for the viewer, and he plays his part well enough – if I have any criticism it’s that he imbued it with a little too much lightheartedness. Lew Ayres, on the other hand, was the weak link for me, never completely selling me on the idea that he was an eminent psychiatrist.

Working out where the rights to a film lie can sometimes be akin to blundering one’s way through a minefield. This was originally an International picture, later to be combined into Universal International, but the R1 home video rights don’t seem to belong to Universal now. A few years ago, when the rights to the Republic library reverted back to Paramount from Artisan they announced this title (along with a few others complete with artwork) for release on R1 DVD. However, Paramount then promptly licensed the library to Lions Gate and those titles disappeared off the schedule. Bearing all that in mind, I’d imagine the chances of The Dark Mirror making an appearance on DVD in R1 are slim to non-existent at the moment. However, the film did get a release in Germany late last year via Koch Media (I think there’s also a French disc out there, but something tells me it suffers from the dreaded burnt in subtitles) and it’s a very attractive disc. It comes in a book style digipack with a booklet – 10 pages, but all in German – and boasts a nice transfer. The image is generally very strong and sharp, although there are a few instances of weakness and heavier grain. All told, it’s a pleasing disc of a hard to find movie. Slowly, more and more of Robert Siodmak’s noir films are making their way onto DVD and I found this latest addition very welcome. I’d place it somewhere in the mid-range of the director’s work, which should be recommendation enough in itself.

4 thoughts on “The Dark Mirror”