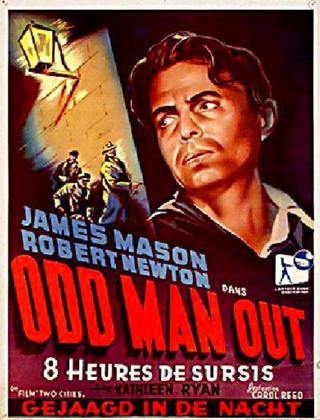 Today is the third birthday of Riding the High Country, and for that reason I wanted to feature a movie that occupies a special place in my affections. Belfast isn’t a city that one would normally associate with film noir. Still and all, it’s not such an outlandish setting when you actually think about it a little. It’s a city with an especially dark past (and a future that remains far from certain for that matter) that’s seen more than its fair share of death and mayhem. Carol Reed’s Odd Man Out (1947) uses the shadowy post-war city as the backdrop for a story that’s a haunting mix of tragedy, love and intrigue. It’s also a very Irish tale, and perhaps that’s why it has always resonated with me and fascinated me.

It’s the story of one man’s last hours, and how this impacts on his friends, enemies and even those who are strangers. Johnny McQueen (James Mason) is the OC of the IRA in Belfast (the film never specifically identifies the name or the place, referring only to “the organisation” and “a Northern Irish city”, but that’s the what and the where in any case) who’s only recently escaped from prison. He’s been laid up in a safe house and is about to emerge again to lead a robbery. Although doubts are expressed about his suitability for the task, due to his having been out of circulation for so long, he shrugs them off and insists on going ahead with the plan. The raid proves disastrous through a combination of bad luck, physical weakness on Johnny’s part, and the incompetence and cowardice of his associates. The end result is that is a man is killed, Johnny is shot and wounded, and worst of all is abandoned on the streets of Belfast. As the light begins to fade and the temperature drops, one man sets out on his final journey around the city while the police cast their net and the avenues of escape are progressively narrowed. This torturous odyssey of a dying man takes on a dreamlike quality as he stumbles through darkly hostile backstreets and decaying tenements. Along the way he crosses paths with a motley selection of characters who respond variously with charity, pity and fear – but always with an undercurrent of suspicion and self-interest at the back of it. In a sense the film offers a sneak peak at the flip side of the Irish character that all of us born on that island know about but rarely acknowledge. The complex and frankly dangerous history of Northern Ireland, which frequently left many ordinary people caught precariously in the middle, probably intensified this. The resultant attitude was born of a combination of “whatever you say, say nothing” and “but what’s in it for me”, and was maybe the only alternative if you wanted to survive. If that all sounds a little negative, there’s something altogether finer at the heart of the picture though. Kathleen (Kathleen Ryan), Johnny’s girl, is driven on not by any base interest but by her love. She knows that she has no future with this doomed fugitive, but her devotion sees her scour the snowbound city for him so she can protect him and simply be with him. When the couple eventually unite on the icy docks in the shadow of the Albert clock, with the police closing in remorselessly, it’s Kathleen who takes the only option open to her to ensure they remain together. That finale has real emotional power that refuses to fade however many times it’s viewed.

Sometimes I think it’s strange that it should be a British crew, writer and leading man that managed to get so deeply into the Irish mindset. On the other hand, maybe it takes an outsider to see people as they are and thus it’s easier for them to strip away the superficial and get to the essence. Of course, author and screenwriter F L Green was married to an Irishwoman and lived in Belfast so he did have first hand knowledge to draw upon. Carol Reed’s commonly acknowledged masterpiece is The Third Man, and that film is regarded as the cornerstone of his reputation. However, over time, I’ve come to the conclusion that Odd Man Out is the better movie. Stylistically, both films use  similar techniques –  disconcertingly tilted angles, deep shadow, and a forbidding city as a backdrop. Odd Man Out is the more intimate story though and it’s plot is simpler and more emotionally involving, which gives it the edge for me. James Mason is simply immense as the dead man walking, and the role of Johnny McQueen remained the one he rated highest for the rest of his life. I also feel he gave his greatest performance in what was a very difficult part, conveying an enormous amount of pathos and emotion with only minimal dialogue. It’s heartbreaking to see this shambling figure shunted from person to person, with the only thought in most of their heads being how to get shot of this burden before disaster befalls them too. Kathleen Ryan’s work is memorable too as the only person who actually cares for Johnny. The scene in the priest’s house when she talks of her love and how it has consumed her totally is exceptionally moving and all the more effective and credible due to her understated acting. I’ve already mentioned the powerful finale and it’s worth noting that the restraint of both Mason and Ryan contributes significantly to its success. The rest of the cast is dominated by fine Irish character players with strong theatrical backgrounds. A few notable exceptions are William Hartnell as a nervy barman, and Robert Newton as a half-crazed artist bent on painting Johnny’s portrait in order to capture the truth about life as seen through the eyes of a dying man. Newton’s performance is probably the weakest part of the whole film, being far too hammy and ostentatious. The location filming in Belfast adds to the authenticity of the picture and Robert Krasker managed to capture the threatening feel of the city by night. As a footnote, it’s also worth mentioning that the Crown Bar featured in the film (although the interiors were actually a pretty accurate studio reproduction) still exists and looks the same. It’s across the street from the Europa, Europe’s most bombed hotel, and I drank there many times when I lived in Belfast as a student.

The UK DVD of Odd Man Out from Network is a wonderful presentation. It sports one of the best B&W transfers out there with deep, rich blacks and excellent contrast. It’s also loaded with quality extras including a documentary on Mason, an archive interview with the star, the script and a gallery. There’s also a 24 page booklet by Steve Rogers which is very detailed and full of great stills and advertising material. This title was also available as part of Optimum’s James Mason Collection, but I have no idea how that disc stacks up, and anyway it looks as though the Optimum set has gone or is about to go out of print. This film is one of my all-time favourites and I can’t praise it highly enough. Apart from the startling visuals and heartfelt performances, it’s notable that this picture succeeds in rising above the political minefield of its setting to tell a marvellously human story that’s not afraid of probing the darkness before ending on a note of hopeful tragedy…and that’s about as Irish a paradox as you can get. If you haven’t seen this film yet then you’ve been missing out on a piece of cinema that is exceptionally fine.