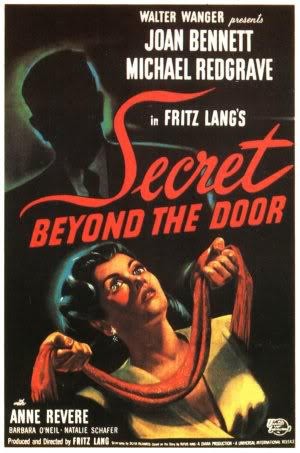 In the past I’ve written about a few Freudian thrillers from the 40s, Spellbound and The Dark Mirror for sure. The decade has many examples though as it was such a fashionable subject and seemed to blend effortlessly into the world of film noir. Looked at now, from a modern perspective, the cod psychological mumbo jumbo of these films is fairly risible. However, films are first and foremost an entertainment medium; we don’t watch them to gain, for example, a deeper insight into psychoanalysis. So, when a movie like Secret Beyond the Door (1947) presents us with a dubious scientific explanation for the odd behaviour of its characters it’s not really fair to criticize it too heavily on that score. Fritz Lang’s film really is an exercise in style over substance – the look, feel and mood of the picture is what carries it, not the plausibility (or lack of it) of the story or the questionable motives of the main characters.

The basic premise is a familiar one, various forms having been used over the years in a variety of films. There’s a young woman on vacation who meets a mysterious yet attractive stranger, falls in love, marries and, after a time, discovers that all is not what it initially seemed. The woman in this particular movie is Celia (Joan Bennett), an heiress who’s recently found herself alone in the world and has taken off on a trip to Mexico before returning to the States and settling down to a life of bland respectability. However, Celia is not the usual, run-of-the-mill innocent abroad. Contrary to appearances, there’s a darker, almost perverse, side to her nature that soon becomes apparent. Quite by chance, she witnesses the flare-up of a knife fight between two local men. This isn’t some matter of slighted honour, more a duel of passion; the men are vying for the affections of a woman. Instead of doing the sensible thing and walking away, Celia is rooted to the spot, fascinated by the events before her. The viewer isn’t the only one struck by the hungry, predatory look in Celia’s eyes as she absorbs this primitive ritual – another bystander’s attention is drawn to her. He is Mark Lamphere (Michael Redgrave), an architect of patrician background.

To cut to the chase, Celia and Mark fall in love, marry and move back to his out-of-town home in the States. Even before they leave Mexico though, it’s apparent that all isn’t well with Mark; he has a tendency to withdraw from intimacy without explanation. As the couple embark on their new life the skeletons begin to rattle in the family cupboard and, bit by bit, secrets and hints of a dark past start to emerge. Celia’s husband is a deeply troubled man who appears to have a morbid obsession both with historical murders and the rooms in which those crimes took place, while questions linger over the death of his first wife. The true roots of the problem are not immediately obvious but, even so, the new bride slowly comes to suspect that her own life may be in danger.

The script calls for a good deal of irrational behaviour on the part of the main characters, enough to sink many a movie. Despite that, the film still works and is pretty successful as a piece of highly strung noir melodrama. This is largely due to the work of director Lang and cameraman Stanley Cortez, between them creating a stylish and stylized visual experience. The opening segment in Mexico has a dreamy, unreal quality that perfectly fits the mood of the lovestruck Celia. As soon as the action switches to the Lamphere estate the look and feel alters too, the uneasy romanticism of the south of the border scenes switches to something more akin to the gothic nightmare that begins to unfold in Celia’s shadowy and threatening new home. It’s this aspect of the film that leads to comparisons being drawn between it and Hitchcock’s Rebecca. On the surface, there are parallels: newlyweds haunted by the spectre of the husband’s murky past, a family home where unwelcome memories seem to lurk in every shadow, and a distinctly odd household.

For all that, the two movies are really quite different in essence, chiefly as a result of Joan Bennett’s characterization of Celia. Unlike Joan Fontaine’s second Mrs DeWinter, Joan Bennett is a tougher and more worldly woman. I’ve already mentioned the dark side of Celia that’s apparent from early on, but the perverse side of her character is further developed as the story progresses. A weaker, and maybe a saner, woman would likely hightail it back to the safety of the city when her husband first begins to exhibit signs of serious psychological imbalance. But not Celia; she chooses to stand her ground, whether through raw courage or her own fascination with danger, and stick it out to the bitter end. One of Bennett’s great strengths as an actress, and very likely the reason Lang chose to work with her so often, was her ability to combine feminine allure with the grit necessary to hack it in a grim world. I found Michael Redgrave’s performance much less satisfactory though. My biggest issue was that I never felt entirely convinced by his transition from the cool aristocrat to bug-eyed loon. However, in all fairness, this kind of thing is rarely especially easy to pull off. His best moment occurs in the short fantasy scene where he imagines himself on trial for murder. With a jury of literally faceless men looking on, Redgrave plays both prosecutor and defendant in the ultimate trial of conscience.

For a long time Secret Beyond the Door was one of Lang’s most elusive titles on DVD, at least in an acceptable form. As the rights in the US now appear to reside with LionsGate it’s probably not a good idea to hold your breath waiting for anything to appear from that source. There’s been a French disc available for a while but it suffers from the old problem of forced subtitles. However, last year saw two releases that fit the bill: a budget disc from Italy and a nicely packaged edition from Exposure in the UK. Both seem to use the same transfer for the movie, but the UK release sees more effort put into overall presentation. The movie gets a nice remastered transfer with very good contrast (vital for a film like this) and only the odd speckle here and there. For extras we get an extensive gallery and filmographies. There’s also a 12 page booklet that reproduces the original poster art on the cover and contains three separate articles by David Hughes, James Oliver and Claudette Pyne. In this era of cost-cutting MOD programmes, it’s a credit to a small outfit like Exposure that they have both the will and ability to produce a thoughtful edition like this. Anyone interested in collecting classic movies really ought to consider putting a bit of business their way and support such efforts. This film tends to be glossed over somewhat when Lang’s work is discussed, probably due to the absurdity of certain aspects of the plot, but it’s actually very enjoyable. Joan Bennett gives a good performance in the lead and Lang directs with great skill and style. Anyone who is interested in film noir, Fritz Lang, or just classy 40s movies should have a copy of this in their collection.

21 thoughts on “Secret Beyond the Door”