Having looked at a hybrid movie last time out (a western/swashbuckler mash-up), I thought I’d continue in a similar vein and feature another western which has borrowed and blended in elements of another genre. Here it’s the espionage or spy movie and the result of this cinematic marriage is Springfield Rifle (1952).  It takes place during the Civil War, which has traditionally been a setting with decidedly mixed returns in both critical and commercial terms. And I think that’s what could be said of this production too: the film is interesting in places, muddled and short on momentum in others, and ultimately not wholly satisfying, a classic mixed bag.

As far as plot is concerned, this is the type of film where one has to be careful not to give too much information away, the mystery aspect is significant and it would be churlish to spoil that for anyone who hasn’t seen this before. Right from the beginning we’re made aware that this is a tale of counterespionage, and I doubt if it’s revealing too much to say that it’s essentially a case of setting a spy to catch a spy. Anonymous raiders are rustling horses in Colorado which are bound for the Union army. The regularity and success of this rustling operation strongly indicates that a spy or traitor is playing a part. Given the nature of conflict at the time, horses are vital to the war effort. So, the top brass is pressing for something to be done, and that pressure is being felt by local commander Lt Colonel Hudson (Paul Kelly). It’s Hudson’s hope that Major Lex Kearney (Gary Cooper) can deal with the problem. When Kearney’s command is relieved of its herd of horses with a shot being fired in anger, the Major finds himself facing a court-martial for cowardice. While this brings disgrace it also opens up an opportunity to learn much more than anyone in a uniform could hope to do. A bitter and disgruntled man, despised and shunned by family and former comrades alike, is in an ideal, unique position to infiltrate the ranks of the raiders. 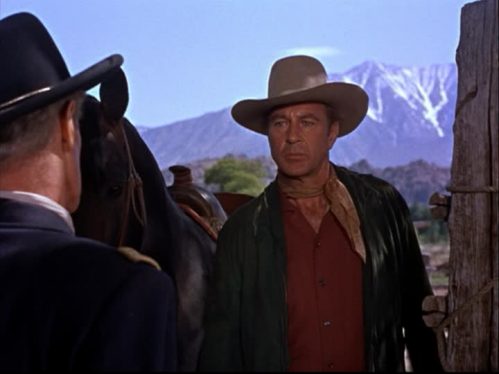 When you take a look at the cast and crew of Springfield Rifle you’d think there were strong grounds for expecting a first-rate piece of cinema. Even there are good points to consider, and I’m going to do just that presently, the end product does not measure up to what the constituent parts appear to promise. A film directed by Andre de Toth, especially around this time, is going to have some strengths, and it can’t be denied that the movie looks quite spectacular in places – the location work is a joy in visual terms giving the film a real boost, and the action set pieces are memorably staged and coordinated. There’s also a powerful and distinctive Max Steiner score to add some punch and drive. The beginning, and the somewhat misleading title, raise the prospect of the film being one of those odes to the military that can all too easily run to dreary and sanctimonious. Luckily though, the espionage theme takes precedence and the story goes in some unexpected directions – questions of trust and integrity are not only raised but are explored in some depth as well.

Movies with a script by Charles Marquis Warren normally get my attention, not because I like them all or even rate them all that highly – his TV work is undoubtedly more significant – but his name does encourage a certain amount of anticipation. Frankly, I feel the plot of Springfield Rifle is excessively and unnecessarily complicated. Aside from the twisting and turning, which is par for the course for any spy movie, the structure becomes muddled in my view by the tendency to reach too many (anti) climaxes, thus watering down their effect and drawing the energy out of the picture. The film runs for an hour and a half bit it feels longer than that.

Think of Gary Cooper and 1952 and, supposing you’re a movie fan, the words High Noon must surely come to mind. Springfield Rifle is from that same year but it’s a world away when it comes to quality. Again, it’s not a bad film but it is a rather mediocre one. I try to look at material on its own terms, to avoid unfair or loaded comparisons where possible, but there are occasions when I can’t get round them. In the same year as High Noon the sheer ordinariness of this movie leaps out at one but the fact is that it fares the same when placed against a lot of Cooper’s other genre work. I don’t say Cooper delivers a poor performance – there’s the deceptive simplicity which was his trademark, and also a meanness (verging on sadism I’d say) touched on in the aftermath of a fight with Lon Chaney Jr that would be drawn on further by the actor in Anthony Mann’s later Man of the West. Nevertheless, it’s minor Cooper and I can think of at least a half dozen other westerns which used his persona and talents better.

The rest of the cast of Springfield Rifle is extremely impressive: Lon Chaney Jr, Phil Carey, Paul Kelly, James Millican, David Brian, Phyllis Thaxter, Alan Hale Jr & Fess Parker. By anybody’s standards, that’s quite a list. However, with the exception of Kelly and, to a lesser extent Brian, these people are wasted and their abilities are never exploited as fully as they ought to have been. Many of them are written into the movie and then written out abruptly or, in a few cases, simply dropped with next to no explanation. In some ways, this failure to get the best out of such a bank of talent is the most disappointing thing about the movie.

Springfield Rifle was released years ago on DVD in the US by Warner Brothers as part of a Cooper box set. The film looks OK but there are some marks here and there and there’s the potential, with a bit of restoration, to have the film looking really splendid. I doubt that will happen though, and maybe it’s not something worth getting upset about. While the movie could be spruced up visually that won’t address the weaknesses inherent in the script. My final verdict? A picture which is very attractive to look at, a cast to stoke up your enthusiasm, but a complex stop-start script that eventually trips you up in the overabundance of peaks and troughs.