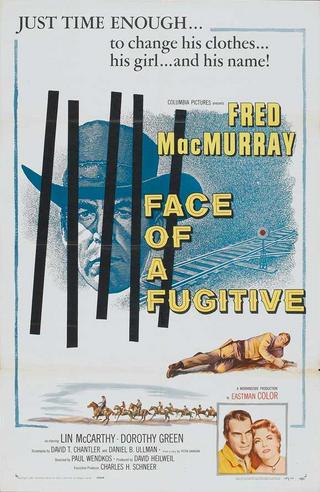 A race against the clock is usually a solid and bankable  hook upon which to hang a story; there’s that built-in  element of suspense that grows naturally from the diminishing time, and then of course there are a fair few variations to exploit. Face of a Fugitive (1959), one of the last times Fred MacMurray would feature in a western role, sees the net drawing ever tighter around a wanted man, and the complications and obstacles lying in wait.

Jim Larsen (MacMurray) starts out as a prisoner, traveling a train on his way to serve time for robbery. Down but not quite out, he’s just got the jump on his amiable if slow-witted escort when his impulsive brother shows up ready to set him loose. The result of this unsolicited “help” is an exchange of gunfire that sees the lawman killed and the brother fatally wounded. This leaves Larsen running in earnest, now with a murder rap hanging over him and no way to prove his innocence. His only chance is to disappear before the law seal up all the escape routes. A bluff on another train buys a little time but even a name change and a touch of bare-faced audacity may not be enough to allow him to slip away from a small town in time. With all exits patrolled, Larsen’s only chance is to brass it out and hope he can find a way out before the wanted posters bearing his likeness arrive the following morning. 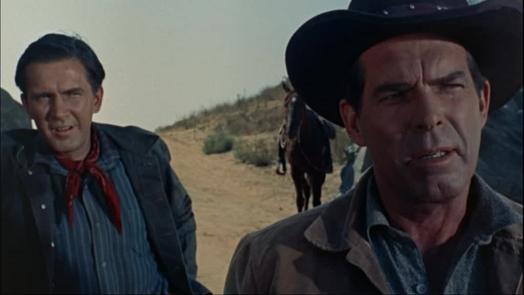 Face of a Fugitive sits comfortably among other late 50s westerns. Its theme of an individual striving to stay one step ahead of the guilty shadows cast by his own past and his somewhat reluctant path towards redemption had been thoroughly explored by this time, but that’s not to say the film is worth any less as a result. It benefits from the weary and fatalistic lead and the frequently inventive and evocative use of studio interiors by cameraman Wilfred M Cline and director Paul Wendkos. I tend to think of the latter as primarily a television name and I think there is, on occasion, a little of that sensibility on show  – the overall pacing and some of the shot selections. He would go on to take charge of a number of noir-tinged episodes of The Untouchables and I see some of that aesthetic at work here. Jerry Goldsmith earns one of his early screen credits for the score although I’m not convinced that a tight little production such as this is the best vehicle for his  more expansive style.

As I understand it, Fred MacMurray wasn’t overly keen on his western films, but he made some impressive ones: At Gunpoint would make for an interesting double bill paired up with High Noon, and Quantez is something of a low budget masterpiece. Face of a Fugitive offered him another worthy part, of the type that sat well with his inherent ambivalence and mock cynicism. I think he was well suited to roles like this, where he never appears fully comfortable with the image of himself he projects – that shallow insolence always feels like a veil to conceal the fragility of his  supposed self-confidence. 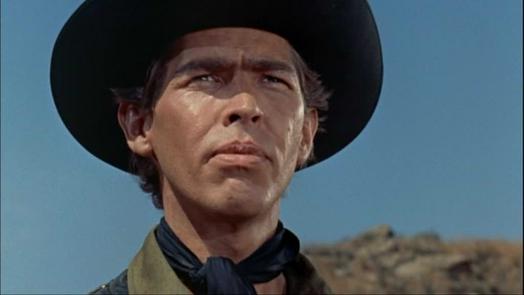 If MacMurray was nearing the end of his western career, James Coburn was just setting out on his. Within a year he and six others would head south of the border with John Sturges and never look back. His part here is a small but showy one as the villain’s principal henchman, and he stalks and prowls around the screen with wonderful menace. It’s just as well too as the villain of the piece, Alan Baxter, is just about passable, but lacks that authoritative presence his role calls for. Dorothy Green and Lin McCarthy play the other main characters and are fine without being especially remarkable.

I’m not sure how widely available Face of a Fugitive is for  home viewing – I have  an Italian DVD which is perfectly adequate in my opinion. The widescreen print used is generally clean and the transfer is acceptably sharp. If I had any complaint, it would be that the sound can be a little  weak or muffled from time to time but it remains audible. All in all, this is a good western, pacy and made on a tight budget, it represents a nice showcase for the contrasting talents of MacMurray and Coburn.

48 thoughts on “Face of a Fugitive”