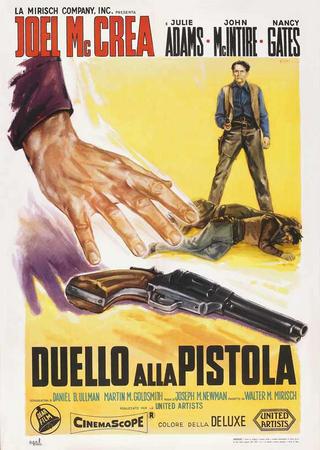 If any decade can be said to offer the finest representation of the strengths of the western, then the 1950s has to be it. And if any one year is to be regarded as providing the purest distillation of the themes and motifs of that genre, then 1959 has to be the prime contender. Whether the effort was conscious or not is of little importance; what matters the way everything built upon foundations already laid earlier, gaining depth and gravitas as the decade wore on, to culminate in the cinematic riches of that peak year. The Gunfight at Dodge City is a fine film, a beautifully shot piece of wistfulness, a mature film for a mature star in a genre which had become a master of its own conscience.

There are certain names which have a habit of cropping up time and again in westerns – lawmen like Wyatt Earp and outlaws such as William Bonney. Bat Masterson may not be quite as well-known but it would be a close run thing and he can’t be far off most people’s radar either. The movie isn’t what you could call a biopic, it just uses a familiar western figure and weaves a story around his legend. We first encounter Masterson (Joel McCrea) as he’s about to return to civilization after a spell hunting buffalo. First though, there’s a visit from an old acquaintance Dave Rudabaugh (Richard Anderson), warning him of the threat posed by a jealous and belligerent soldier. Right away we come face  to face with the theme that dominates the movie, violence and its consequences. Masterson tries to explain to his young and naive companion how the fear and anxiety that walk hand in hand with violence gnaw at the soul, and how the cold brutality of the consequences haunt one thereafter. We get to see it too, in order to drive home the point and the rest of the film employs the oft-used town tamer motif as a vehicle for its parable about loneliness and renewal.

The  previous year had seen director Joseph M Newman explore the ambiguities in McCrea’s character in Fort Massacre. There’s less of that quality on display here, instead we get to see more of the personal integrity typically associated with the star, and an implacability that both commands and demands respect. McCrea was then in his mid-50s, confident enough to project a cool self-awareness and accomplished in the craft of dominating the screen. If the film goes places the western had been before, it’s McCrea’s honesty and directness that keep it feeling fresh. Still, it’s a role that is uncompromising and could become almost too harsh were it not for one character player in particular. John McIntire was a marvelously versatile figure and could add a twinkle to his eye when necessary to lighten even the grimmest  situation. Julie Adams and Nancy Gates are the two women competing for McCrea’s affections, and adding subtle shades to the usual good girl/bad girl scenario.

The Gunfight at Dodge City isn’t a western of the plains or the wide open spaces, remaining confined to the back lot and interiors throughout. However, Newman’s pacy direction and careful use of angles ensures this is never a drawback. If anything, the shot selection in combination with the atmospheric lighting choices of cameraman Carl E Guthrie are used to the greatest possible effect. And then there’s the finely staged climactic duel. It’s a terrific piece of work, as McCrea hears his own words from the film’s first scene echoing in his ears, fatalistically pointing out the folly and fear of the gunman’s path. He reluctantly strides out onto a deserted street to confront an equally unwilling foe, two men fully aware of what they are undertaking yet apparently powerless to break free of the deadly code that binds them. After the iconic face-off the guns will crash and one of them will crumple in the dust, and the whole affair is executed clinically and without any veneer of glamor. This is what the western was building up to – a frank acknowledgment of the grubbiness of violence. The myth  of the west was not built on a celebration of gun play but a celebration of the quest for accommodation with one’s own soul and conscience.

The Gunfight at Dodge City has been readily available on DVD for years now, and there’s also a Blu-ray on the market. I still have the old US DVD, which presents the film quite handsomely in anamorphic ‘Scope. I imagine the Hi-Def version will show off Newman and Guthrie’s imagery to great effect but the old SD copy isn’t bad. I think this is a very strong film, a good example of the quality of work in the genre by this time – an excellent film from a year filled with highlights.

27 thoughts on “The Gunfight at Dodge City”