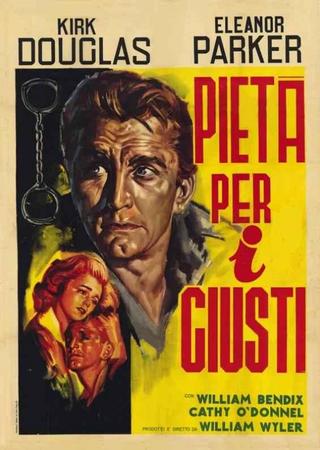 Cinema and theater, two near relatives in the visual/performance art sphere, both well suited to the presentation of drama via their shared familial traits while also exploiting their own distinctive characteristics to spin their yarns in subtly different ways. In brief, theater is all about intimacy and immediacy – capturing the essence of the moment in an almost tangible way – whereas cinema, somewhat paradoxically, uses its inherent distance to draw us in through the broader visual splendor. The fusion of these two competing yet complementary forms can have mixed results, largely dependent on the scope of the production and its ultimate goal. At worst, it can descend into a static talk-fest, trapped by structure and a vague sense of claustrophobia. On the other hand, a clever filmmaker can use his cinematic bag of tricks to create the illusion of breadth without sacrificing the feeling of closeness associated with the stage. William Wyler’s Detective Story (1951) makes a reasonable fist of striking an equitable balance.

In a nutshell, we’re witnesses at the wake and funeral of one man’s humanity. It opens on a bustling New York street and quickly moves indoors, into the precinct house that will form the backdrop for the bulk of the story. We’ve seen this a thousand times; cops and criminals coming and going, some chirpy and others dejected but most just mired in the routine of their everyday lives. Gradually, the focus is drawn to Jim McLeod (Kirk Douglas), a superficially typical detective, cocksure and confident in his professional and personal life. Yet right away, there are hints of something not ideal as he shares a quick kiss with his wife Mary (Eleanor Parker). A snatch of conversation, an apparently throwaway line suggests that the All-American wholesomeness on display may be misleading. And so it proves to be as the various characters, from a ditzy shoplifter to a lovestruck embezzler sharing the squad room with genuinely vicious hoodlums, orbit the core drama that will force the McLeods to confront their own inner selves. 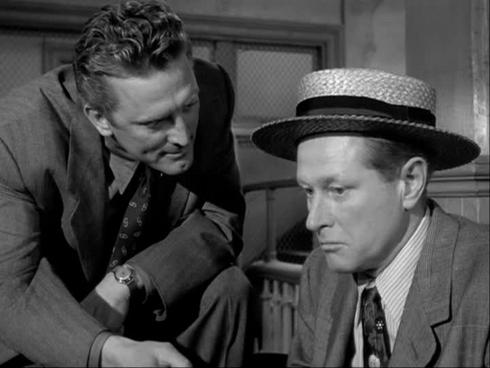 Rather than spend a lot of time on the plot and how it develops, I’d prefer to mull over some thoughts that occurred to me as I watched this movie again. To begin, I liked Wyler’s unobtrusive direction and the way he uses Lee Garmes’ cinematography to contextualize not only each scene but the movie as a whole. Wyler can, I suppose, be seen as one of those classic era heavyweights who tended to be associated with “important” pictures. We’re talking “message movies” and that phrase may well evoke thoughts of Stanley Kramer and others at their most ponderous. Still, that’s not entirely fair for these people knew how to shoot a film with skill and artistry too. Here the theme is the impossibility, or maybe the undesirability, of pursuing  purity on an emotional, intellectual and philosophical level. McLeod is set up as a man striving to become a paragon. The story charts the deconstruction of this effort, finally highlighting the hollowness at the heart of it all. And Garmes’ photography, especially his deep focus shooting, keeps the viewer aware of the satellite stories circling the main event, thus preserving the intimacy of the theatrical experience while simultaneously adding a wider cinematic perspective.

I started off this piece referring to the different approaches cinema and the theater take to the same material and those thoughts were always with me as I watched Detective Story. The origin is a stage production, written by Sidney Kingsley, and that aspect is always there, mainly in the restricted setting but even in some of the performances too, to a certain extent anyway. The stage, with the necessity to project calls for a bigger performance, and the use of a different set of acting skills. Cinema is a whole different matter; the giant screens and the possibility of using close-ups, magnifying even the least significant twitch a thousand times, mean more care, control and minimalism are the order of the day. As much as anything, it’s the size of the performances that delineates these forms. 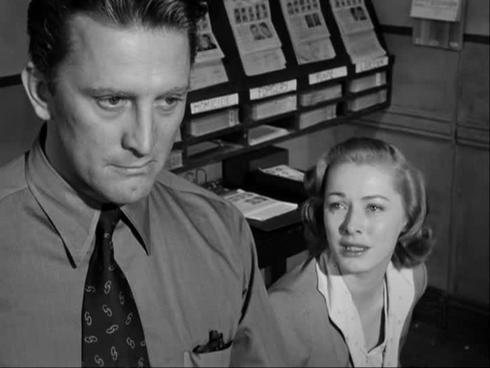 A simmering presence at all times, Kirk Douglas has always been capable of tailoring that size to the demands of a range of roles. I think he was generally at his best when working with strong, experienced directors and the part of McLeod demanded he tread a fine line, touching on the explosive and emotive without straying too far into bombast. His character is ruled and driven by an adherence to rigid principle and moral fundamentalism. This quest for purity has twisted his love and seen it mutate into a passion for vengeance, of the type that has the destruction of the soul as its final destination. It must have helped that the more powerful scenes had to be played against the assured Eleanor Parker. She provides the emotional center of the movie, grounding it and lending it meaning with dignity and empathy.

If the inherent theatricality of the roles has been harnessed by Douglas and Parker, I feel that Joseph Wiseman kept a looser grip on the reins.  There’s a loudness about his work here, and that even goes for the times when he’s not speaking a word, and a tendency to succumb to self-indulgence. He’s very definitely performing, is fully aware of the fact, and wants to make sure everyone watching him knows it too. This could have overwhelmed the picture, but it’s a credit to the measure and subtlety of the likes William Bendix, Cathy O’Donnell, Craig Hill and Frank Faylen that an equilibrium is maintained. And if I haven’t made individual reference to Lee Grant, George Macready, Horace McMahon and others, well that’s not to say their work is any less deserving of mention.

Personally, Detective Story has always been an enjoyable watch for me, powerful without being preachy and with a timelessness to the core theme to ensure it remains relevant. It’s never, to the best of my knowledge, been released on Blu-ray but the DVD  should be easy enough to track down and, besides, it looks excellent in standard definition.

Finally, I find it very pleasing too to be able to post this on the day the movie’s star Kirk Douglas turns 103.