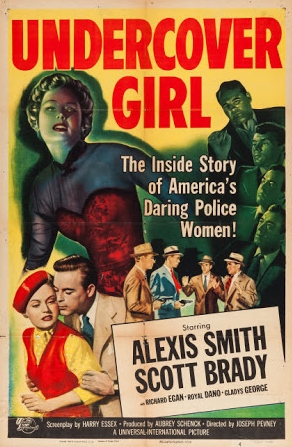 A slight departure today, but one which I’m sure most who read and follow here will appreciate. In short, I’m honored to be able to host a guest post from Gordon Gates, a man who has contributed to many a discussion here over the years and who brings along a wealth of knowledge on genre pictures and television shows. He very kindly offered to do a guest write-up, and also floated the possibility of others in the future. I’m delighted to be able to offer Gord this space to highlight a movie of his choice, and I’ve no doubt other readers here will share those sentiments.

I would like to thank Colin for the chance to do a guest review. I am by no means an expert on film but I know what I like. Film Noir, westerns, war films, Sci-Fi and early television are at the top of the list for me. Up first, I’m going to dive into film noir. Undercover Girl  (1950) is a Universal-International B film that stars Scott Brady, Alexis Smith, Royal Dano, Gerald Mohr, Gladys George, Angela Clarke and Richard Egan. This was the second feature helmed by actor turned director, Joseph Pevney. The story was supplied by Harry Essex whose work includes, Desperate, The Killer That Stalked New York, The Fat Man, Bodyguard, I, The Jury and Kansas City Confidential.

This one starts out in Los Angeles where a Police informant is badly wounded in a vicious knife attack. Before he bites it, the informant tells his Police Detective contact, Scott Brady, there is a large shipment of drugs coming to town. The shipment is arriving from New York. He also manages to whisper there is a crooked New York cop involved.As this is going on in LA, back on the east coast, Police Detective Regis Toomey, the crooked cop, has had a change of heart. Toomey has a meeting with mobster, Gerald Mohr about the 10 large he took to look the other way. He tosses the cash back at Mohr and tells him he is taking him in. This does not go well for Toomey. A henchman of Mohr puts the kibosh on Toomey..

Now we meet Alexis Smith, Smith is a trainee with the NYPD following in her father’s footsteps. She takes Toomey’s murder hard and redoubles her efforts to make the force.

LA cop Brady is soon in New York to see if he can uncover anything about the drug shipment. Smith does not believe Brady that her father might have been a bent copper. She offers to help out Brady. Brady takes her up on the offer. He will send her in as an undercover type back in LA.

It is back to LA to fill in Smith on her new identity etc. They hook Smith up with an old time gangster’s moll, Gladys George. George is pumped by Smith for every bit of info she can get. This will help establish Smith’s criminal “bona fides” for her new identity. She is to play a buyer for a drug ring in Chicago. 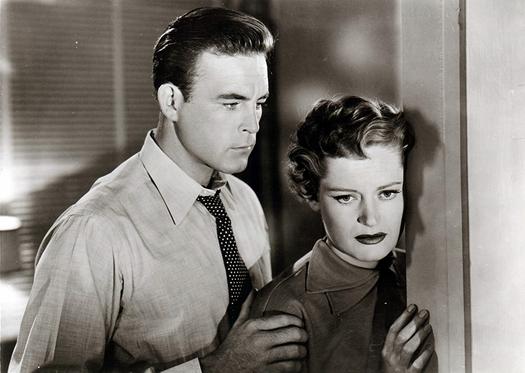 Several weeks of studying are needed before Smith can be inserted into the local criminal crowd. Smith is put up in a downtown rooming house next door to Angela Clarke. Clarke is the former dolly of low level underworld type, Royal Dano. Clarke is a drunk always looking for a bottle. A few words in her ear from Smith, and a promise of some cash, soon does the trick.  Clarke agrees to put Smith in touch with Dano.
Dano shows up at Clarke’s apartment in a less than happy state. He is not amused that Clarke has set up the meeting with an out of town type. Clarke gets slapped around, then, shoved out the 3rd floor window. Dano beats the feet out the door and right into Miss Smith. She points to a back way out of the building.

Smith fills in Brady on the night’s events. Brady thinks the case is now far too dangerous to continue, but Smith still wants revenge for her father’s murder. She tracks down Dano and convinces him to introduce her to someone higher up the drug food chain. A promise of 1000 bucks quickly has Dano on side.

Miss Smith is soon shown into the office of a doctor. The man, Edom Ryan, has a sideline selling heroin. Ryan actually works for the same mobster, Mohr, who killed Toomey in New York. Keeping an eye on Doc Ryan is, “mad as a hatter” gunsel, Harry Landers. Also on Mohr’s payroll is Lynn Ainley.

Before Ryan agrees to any transaction, he needs to check out Smith’s identification etc. Smith knows all the proper answers to the right questions, and is bumped up the line. She meets the boss, Mohr. A deal is quickly arranged for a substantial amount of product for an equally substantial pile of cash.

Now of course the flies start to roost in the ointment. Miss Smith runs into her former beau from New York, Richard Egan. He blows her cover in front of Dano. Dano, an enterprising bottom feeder if ever there was one, decides to blackmail Policewoman Smith. Five large or he turns her over to Mohr. He gives a time and place to Smith for the exchange. 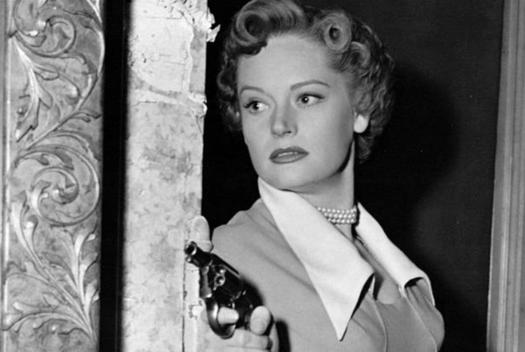 This lays out all the ground work for the film. Needless to say several double crosses, some flying fists, a barrage of bullets and a stack of bodies are needed to bring the tale to a proper end.

This is another of those Universal-International films that is rather difficult to lay one’s hands on. But it is well worth the time if it can be found.

Scott Brady was the younger brother of noir favorite Lawrence Tierney. Look close early and you can spot the third Tierney brother, Edward, in a small unbilled bit.

The cast is all quite good here, with the always entertaining Royal Dano in particular shining as the low-life grifter. This was director Pevney’s second foray into noir territory after the equally entertaining, Shakedown. He hits the mark all the way through. Pevney directed in several genres during the 1950′ s before making the move to television. Two of more well know TV episodes were from Star Trek. These were, Amok Time and The Trouble With Tribbles. Pevney’s film work includes: Desert Legion, Iron Man, Back to God’s Country, Yankee Pasha, Away All Boats and The Plunderers.

As for myself, I’m from Western Canada. Right now I’m based in Calgary Alberta though I have lived in British Columbia and the Yukon. Quite a few films have been make around here as we are only 60 miles from the Rocky Mountains. Eastwood’s Unforgiven, Costner’s Open Range are just a couple of the westerns made here.