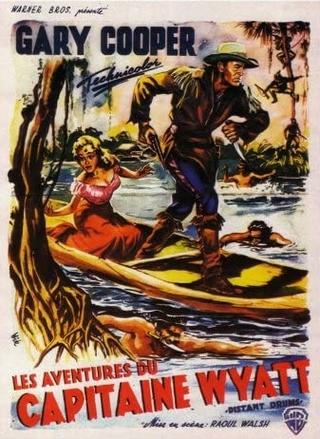 How does one get the measure of a filmmaker? I guess received wisdom has it that a viewing of their best works is the ideal way to go about it; this assertion appears to be self-evident and it’s not one I’m not going to dispute. However, I can’t help wondering if there’s not something be gained from an examination of what might be thought of as their mediocre efforts as well. It just occurred to me as I was watching Distant Drums (1951) that Raoul Walsh’s strengths as a director were still on display despite the fact the movie in question was very much a routine affair. In fact, a great deal of what makes this film worthwhile derives from the skill of the man ultimately calling the shots.

Distant Drums is one of only a handful of movies that use the conflict with the Seminole in Florida as a backdrop. I use the word backdrop because that is very much the case here, with no examination whatsoever of that conflict taking place. In narrative terms it merely serves as a frame on which to hang a straightforward story of pursuit and danger. In brief, the Seminole are being armed by gunrunners operating out of an old Spanish fort and this supply needs to be cut off if the army is to be successful in subduing them. To this end, a young naval officer (Richard Webb) is sent to the island retreat of the reclusive Captain Wyatt (Gary Cooper) to accompany him and his small force and assist them during the essential lake crossing en route to their target. While the initial assault on the fort is a success the return to the prearranged rendezvous proves problematic. Wyatt and his party,  now supplemented by a rescued hostage (Mari Aldon) and her maid, are forced to abandon their original plan and instead plunge into the steamy, crocodile infested Everglades. 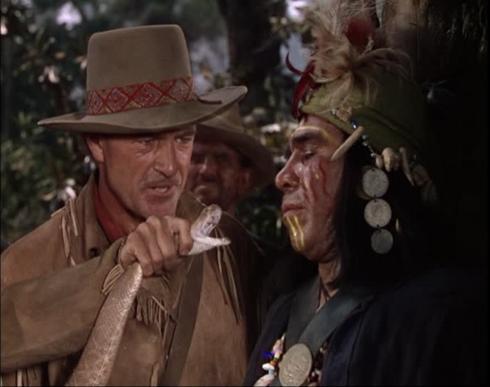 If one takes the movie as an uncomplicated adventure,  Distant Drums works just fine. There is no shortage of incident, the action scenes are frequent and absorbing, and there is enough suspense generated at key moments to quicken the pulse. The assault on the fort is a grand bit of work, shot and cut together with a fine eye for the geography of the building and never drifting into the type of muddle a complex set piece such as this always flirts dangerously with. And this leads me to Raoul Walsh. He was one of the great directors, in my opinion, a man of boundless skill and possessed of the kind of practical artistry that allowed him to tackle even the most unpromising and prosaic projects with the same dedicated flair as one would expect were he making a prestige picture. It’s sometimes said that Walsh was the consummate action director, but it’s maybe more accurate to think of him as a master of drive and motion. His movies always appear to move effortlessly forward, smoothly shifting gears and bringing the audience along for the ride even when the journey itself hasn’t all that much to offer. This is what I was alluding to at the beginning, how the capabilities of a director like Walsh remain apparent despite the limitations of the material he was handling.

I can’t fault Walsh’s direction, and neither the gorgeous location cinematography of Sidney Hickox nor the score by Max Steiner disappoint. So where is the film lacking? Surprisingly, I think the responsibility has to be laid at the door of of the writers. I say it’s surprising because the name of Niven Busch on the credits generally has me expecting a bit more depth; perhaps some  probing into character, some heightened emotion, or even a hint of twisted psychology. Yet none of that is present, and in the end we know little more about any of the characters than we did at the outset. I certainly haven’t seen all of the movies Busch provided a screenplay for but of those I have (mainly his later pictures) I think it’s fair to say that Distant Drums is easily the least interesting. For what it’s worth, I have another of this writer’s scripted movies in mind for a future write up – and no, it’s not Duel in the Sun before anyone asks. 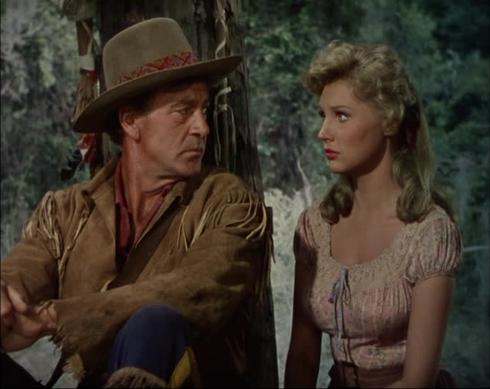 The thing about great movie stars is how even unremarkable films gain by their presence. There are those who dislike or are unconvinced by Gary Cooper’s style, and that’s of course fine, but I’d have thought his place among cinema’s pantheon is undisputed. Sure he’s laconic and his work is understated but he commands the screen whenever he’s present and dares anyone to look away. Still, I feel the script let him down somewhat. Next to nothing is made of the potential suggested by his character’s late wife or their mixed race son. The danger the latter is exposed to at the end and the effect on Cooper is worth noting but it never feels like it’s center stage. Mari Aldon makes for an attractive co-star and the romance which develops is gentle and light. This may well have been her most substantial role, certainly of what I’ve seen. However, I’ll remember her more for her small part as the world weary companion of Warren Steven’s abusive and uptight producer in the superior The Barefoot Contessa. Richard Webb has probably the most thankless role of all, the point of view figure who introduces the whole thing and then ends up relegated to merely tagging along. Had there been some more serious rivalry with Cooper’s character injected then it might have added another layer of interest. The support is provided by Arthur Hunnicutt playing one of his patented frontier types and the seemingly ubiquitous Ray Teal as a discontented soldier.

Distant Drums is one of those productions that depends heavily on its visuals as a result of the lush cinematography in Florida. This is one of the movie’s principal attractions and needs to be shown off to its best advantage. The Blu-ray and DVD released by Olive Films some years ago does highlight this aspect most satisfactorily, even if it offers no supplementary material. I may sound as though I dislike the movie, but that’s not true. It remains serviceable, attractive and entertaining. That said, it feels like an opportunity was missed, that the talent involved wasn’t exploited as it might have been. Nevertheless, it helps cement, in my mind anyway, an appreciation of the apparently effortless skills of Raoul Walsh.