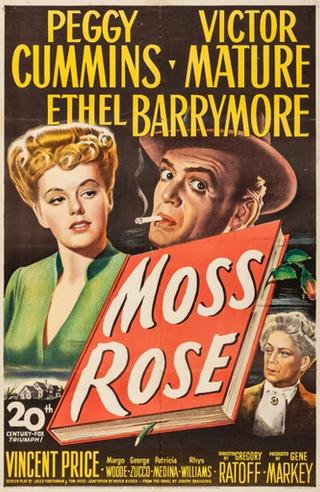 Call a movie contrived and it immediately conjures up images of some wholly unrealistic scenario, something the hardheaded among us will insist gravely could never come to pass. And thus, with wisdom intact, we dismiss it and move on to something more credible and by inference something altogether better. Perhaps the years are encouraging me to be more contrary but I find I’m increasingly at a loss to understand why a lack of realism in any form of artistic expression  – and I’ve yet to hear a convincing answer offered as why those two concepts need to be forced into an uncomfortable marriage anyway – has to be regarded as “a bad thing” and avoided at all costs. The Gothic romance is one of those areas where the contrived situation is commonly found, and that seems to be even more apparent in the 1940s variety which frequently flirted with film noir. Moss Rose (1947) is one such movie, a murder mystery requiring the viewer to resolutely suspend disbelief and take some unlikely behavior at face value.

Edwardian London: Hansom cabs clatter over slick cobbles while tendrils of fog curl themselves seductively around softly glowing gas lamps, and our narrator breathlessly begins her tale. Belle Adair (Peggy Cummins) – it’s her stage name but it’s the one we first encounter her under so I’ll continue to use it here – is a young chorus girl who tells of a mysterious stranger she’s often spotted slipping in and out of the shadows next to the boarding house she occupies along with a number of other performers. She assumes it’s the latest conquest of one of her friends. When that same friend then turns up drugged and strangled in her room Belle is convinced the killer must be that same man and the fact she actually saw him scurrying guiltily from the scene of the crime appears to seal it. With persistence, considerable brass and a sprinkling of luck, she manages to trace the man to one of the better hotels in town. He turns out to be one Michael Drego (Victor Mature), a wealthy gent who just happens to be on the verge of wedding a well-bred beauty. To go into further details would I feel spoil it for anyone unfamiliar with the movie so I’ll confine myself to saying that Belle strikes an odd bargain with Drego, one which falls a step short of blackmail but which is every bit as risky. 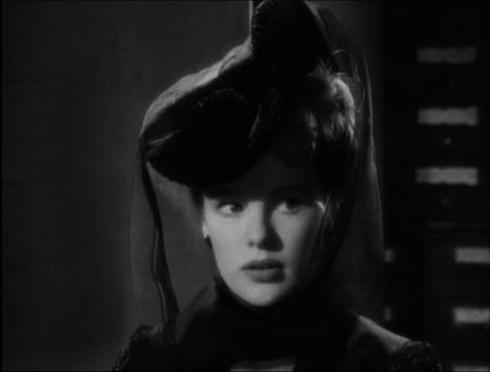 Director Gregory Ratoff seems to have been one of those effortless all-rounders who could be found in classic era Hollywood, a director, actor, writer and producer. Aside from Moss Rose, I’ve only seen a couple of his movies (Intermezzo and The Corsican Brothers) and both of  those quite some time ago, although I have a copy of Black Magic with Orson Welles somewhere. Everything about his handling of the movie feels very smooth and confident, his camera seems to enjoy drinking in the rich details of the elaborate Fox sets and the melodrama at the heart of the story is fully embraced. That story is an adaptation of a Joseph Shearing novel and the script is at least partly due to Niven Busch, who was responsible for the last entry on this site Distant Drums. While that was a  somewhat flat affair, Moss Rose has a little more of the kind of off-kilter psychology one often comes across in scripts by Busch. While this doesn’t have the depth or power of some of his best writing, there is that trademark motif of a dark and disturbing past reaching out spectral fingers to toy with passions in the present.

Victor Mature took the lead in a role which was a fine fit for him, the soulful, tortured look he found so easily had served him well in many a film noir and he exploits it here to good advantage. We’re used to seeing him as a heroic figure, perhaps a pressured and hunted one but a sympathetic character nonetheless. His casting in Moss Rose as the chief suspect subverts those expectations and teases the viewer, and Ratoff’s careful shot selection, with the help of cameraman Joseph MacDonald, emphasizes this. Peggy Cummins, in her first Hollywood production, is another good pick as the vulgar ingenue straining to sample the dream she’s nurtured since her impoverished childhood. There is something touching about the frank idiocy of it and the peril she’s willing to expose herself to, although I guess it’s this aspect which those who pine for greater realism will find least appealing. 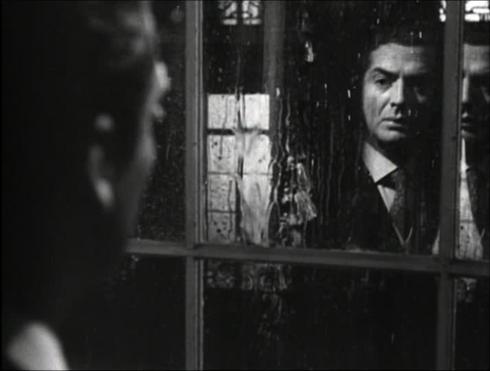 Among the many pleasures of watching movies from the major studios in this era is the depth and quality of the supporting casts. Vincent Price’s silken charm was a boon to every production he appeared in and at this stage in his career, before he’d earned the right to have the whole show to himself, my only regret is that he’s not on screen longer. The deceptively effete, flower loving, detective he plays in Moss Rose is a neat turn, and disguises the character’s cool, steely intelligence. Rhys Williams as his poker faced subordinate is the ideal foil and they make for an entertaining team every time they appear. If you had to pick one actress to project an otherworldly quality, then Ethel Barrymore would have to be among the strongest contenders. That fey persona, as of one only paying the occasional flying visit to the rest of us, is to the fore again here. Patricia Medina and Margo Woode add to the background glamor, and it has to be said that any house boasting George Zucco as the butler  should be automatically viewed with suspicion.

Moss Rose came out on DVD some years ago as part of the Fox MOD line and subsequently popped up in Europe. The copy I viewed is in reasonably good condition, perhaps the contrast is a little too harsh here and there but it looked solid enough overall. I enjoy these gaslight Gothic thrillers with a hint of noir in the background but I acknowledge they may not be everyone’s bag. As I said at the start, stories such as this have a tendency to rely heavily on contrived situations and that can present a problem for some viewers. If, on the other hand, you’re happy to take the movie on its own terms, there is a great deal of pleasure to be had viewing Moss Rose.